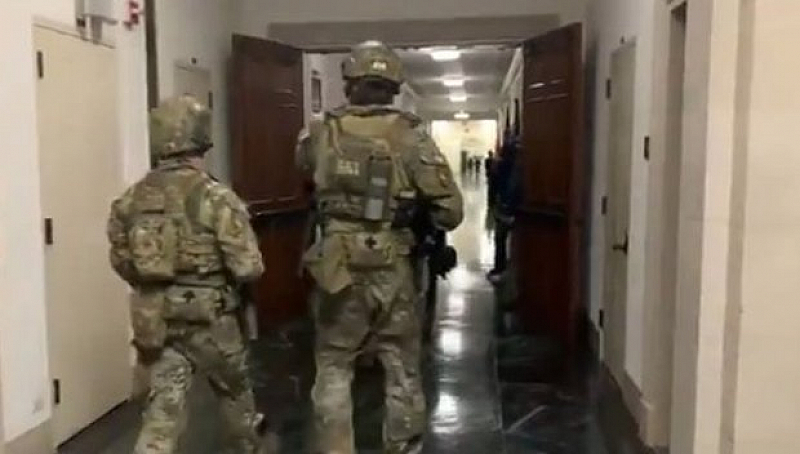 On May 29th, the Bulgarian Ministry of Defense and Prosecutor’s Office launched an investigation into an incident in the village of Cheshnegirovo in the region of Plovdiv.

The incident happened on May 11, but the US embassy said it only learned about the incident on May 28th. The diplomatic mission apologized for the incident and promised to co-operate in the investigation.

“The US Army takes training seriously and prioritizes the safety of our soldiers, our allies, and civilians. We sincerely apologize to the business and its employees,” the embassy said.

The owner of the workshop, Marin Dimitrov, told Bulgaria’s state radio that his seven workers continue to feel stressed by the invasion of the soldiers and that he intends to seek his rights in court.

Footage from the factory’s security cameras showed seven US soldiers armed with assault rifles and moving in fire teams to secure the facility, with no resistance from the workers. After finding no ‘enemy’ combatants, the Americans left.

The incursion was made by soldiers assigned to the 173rd Airborne Brigade, who strayed outside the designated area of the exercise at the Cheshnegirovo Air Base, where they trained in “entering and clearing multiple bunkers and structures across the airfield.”

The exercise is titled “Swift Response 21”. It was a US Army-led multinational exercise involving more than 7,000 paratroopers from 10 NATO allies. Surprisingly, it wasn’t supposed to involve raiding civilian businesses, but surprises happen, just like in war.

Caretaker Minister of Defence, Georgi Panayotov, gave a briefing at which he stated that no violence had been used by the military in Cheshnegirovo – they had ordered the workers in the workshop only to sit down.

Bulgarian President Rumen Radev demanded an investigation into the incident.

“The exercises with our allies on the territory of Bulgaria should contribute to building security and trust in collective defense, not breed tension”, he said

“It is inadmissible to have the lives of Bulgarian citizens disturbed and put at risk by military formations, whether Bulgarian or belonging to a foreign army,” said President Rumen Radev, talking to Minister of Defense Georgi Panayotov and Lieutenant General Lyubcho Todorov, Commander of the Joint Forces Command.

Commenting on the raid by American soldiers of a production workshop near Cheshnegirovo during a military exercise, President Radev stated he expects a thorough investigation into the incident, disclosure of the names of the officials responsible and a review of the organization and safety measures.

“The exercises with our allies on the territory of Bulgaria should contribute to building security and trust in collective defence, not breed tension,” the President said.

The Bulgarian military is currently investigating why information about the US incursion remained hidden from the public for almost two weeks.

Georgi Panayotov, Bulgaria’s envoy to the UN and currently also the country’s acting defense minister, said during a media conference that there was no attempt to cover-up the incident.

Mistakes like that are almost funny. So they looked for oil or what:)

But facts are people gets afraid by such fast surprices.

Its normal here we by that give an excuse to all and maybee some small gift.

I see nothing strange in that paratroppers are there in secret. Its often their job to land and establish themself as such.

Parashute landing troops are different. They are regular infanterists with extra luggage and fighting as infanterist and rapidly connected to the rest og the ground.

It is very important to be close and connected with each other.

‘Paratrippers” was the US army in the 60’s – 70’s today they’re paradiddlers.

“It is very important to be close and connected with each other.” Do you mean sexually?…….sounds about right !

Sean
Reply to  Israel is an Apartheid State

Amerikastanis are hardwired to steal anything to do with oil, so it was a reflex action.

You keep confusing kikes with Americans.

There was a far more accurate meme I can’t find right now; it’s a caricature of jews zooming past Americans in golf carts with cash swindled from shackled Americans carrying chests of gold for jews.

When the US attacks Russia, they will end up attacking the North pole 🤣🤣🤣

Maybe they should take the rifles away and use water guns for training?

You can tell this is a training exercise because they didn’t call in an air strike that included a carrier group, 8 fighters, an AWAC, 4 air to air refuellings 2 submarines, 8- 10 helicopters and a satellite before getting up the courage to go into the factory.

Braindead pindos are a menace to everyone. Hopefully, no live ammo was provided to trigger happy cowboys.

I would never follow instructions that foreign soldiers give me. I wouldn’t even listen to the soldiers from my own country. They have no police powers here (as in Bulgaria too). 🤣

I would show them that: 🤏🤘🖖, my blank ass & the way out of the private property 👉

Mate they don’t respect int.law and state borders, you really think they care about private property in some puny vassal state like Bulgaria?

I don’t think this was a mistake. The US is pushing their boundaries to test the reaction from the locals and to run their PR exercises. They have done this before, in countries where they were not welcome.

Maybe the USadmin thinks it can send its armed soldiers anywhere it wants and are now testing that out on nato members.

Well, when you serve the Jews who hold everyone but them are the enemy, what do you expect?! At least the Jews’ US Tyranny’s mercenaries didn’t bomb the local schools and wedding parties as in Iraq, Afghanistan , Vietnam… Yet.

“Another war for oil!” they thought.

The US government spent hundreds of millions on developing GPS so soldiers wouldn’t get lost and kill their allies again. Then they gave that knowledge to Apple for Free to put in their smart phone just like the camera they spent hundreds of millions on as well for free. They could have sold that technology and used the money to train their soldiers on how to read the GPS.

We’ll have to give them the benefit of the doubt, after all it was oil…. something that they’ve become very adept at stealing, perhaps they thought they were in Syria.