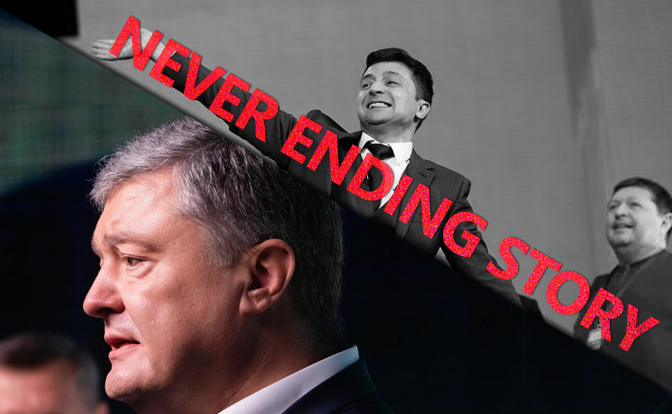 On July 11th, Ukrainian President Volodymyr Zelensky proposed a bill on the removal from public office of high-ranking officials who held their posts from February 23rd, 2014 until May 19th, 2019.

He proposed to extend the lustration law to the resident of Ukraine, people’s deputies, the chairman of the Verkhovna Rada, government members, the prosecutor general, the SBU head, the heads of the Antimonopoly Committee and the State Property Fund, the heads of the state fiscal and customs services, the secretary of the National Security and Defense Council, the heads of defense enterprises, who held their posts between February 23rd, 2014 and May 19th, 2019.

Essentially, Zelensky is attempting to do the same thing former president Petro Poroshenko did after the “Maidan.”

“I propose expanding the list of posts subject to lustration with the following: the president of Ukraine, all Ukrainian lawmakers, the chairman of the Verkhovna Rada, members of the government, the prosecutor general, the chairman of the SBU Security Service of Ukraine, heads of the Antimonopoly Committee and the State Property Fund, heads of the State Fiscal Service and the customs, the secretary of the National Security and Defense Council, top managers of defense enterprises occupying positions from February 23, 2014 until May 19, 2019. This bill is only a public assessment of their activities,” he said.

Zelensky expressed confidence the actions of all these people would receive a “fair legal assessment” in the future. According to him, the decision is prompted by what he has seen during his tenure.

“I talk to officials of different levels every day and I understand: the diagnosis is hopeless. White and blue, red and white, orange, maroon, pink [here the president lists colors of Ukrainian political parties’ flags] – in fact, one thing makes them one – they just don’t care!” Zelensky said.

“I think the least that can be done now is to deprive them of any opportunity to govern the country for good,” the president concluded.

This followed Zelensky addressing Putin on Facebook page asking for a meeting in Minsk with the mediation of the US, the UK, Germany and France.

In the phone call, the leaders discussed issues of a settlement in the southeast of Ukraine and cooperation in returning detainees from both sides. They agreed to continue this work at the expert level.

Separately, the General Court of the European Union upheld an appeal filed by a group of Ukrainian citizens to annul restrictive actions taken against them and their funds between 2016 and 2018.

The judgment concerns former Ukrainian President Viktor Yanukovych and one of his sons, Oleksandr Yanukovych, together with former Tax and Income Minister Oleksandr Klymenko, former Prime Minister Serhiy Arbuzov, former Prosecutor General Viktor Pshonka, his son, Artem Pshonka, and former Head of the Presidential Administration Andriy Kliuyev, who were included, for the first time in 2014, on the list of persons subject to the freezing of funds, on the ground that they were subject to criminal proceedings in Ukraine to investigate crimes in connection with the embezzlement of state funds and their illegal transfer outside Ukraine.

The grounds for the decision was that Ukraine was incapable of proving that the actions taken against the aforementioned persons were accompanied by guarantees of their right to effective judicial protection.

Essentially, even European institutions are beginning to realize that the situation in Ukraine is simply getting more absurd by the day.

In other interesting developments, the counter-intelligence unit of the Ukrainian security services – SBU exposed that a Lieutenant Colonel of the National Guard of Ukraine has Russian citizenship.

In 2014 the military serviceman, “supporting the ideology of the “Russian world”, went to the territory of the temporarily annexed Crimea.”

“He received a passport of the Russian Federation, a driver’s license, entered military registration and was issued a privileged military pension, since in 1995, as part of the armed forces of the country-aggressor, he participated in hostilities in Chechnya,” the SBU noted.

“He received admission to state secrets and initially appealed to the commanding officer to send him to the anti-terrorist operation area. While in the ATO headquarters, the Lieutenant Colonel, violating the established requirements of the secrecy regime, accumulated a large amount of secret information on his personal flash drives for the execution of combat tasks by the units of the NSU from the forces of the antiterrorist operation,” counter-intelligence said.

The officer’s name was undisclosed.

Finally, the autocephalous Orthodox Church of Ukraine was imposed taxes on its parishes by the Patriarchate of Constantinople, because it has completely failed in transferring its churches, as announced by the Metropolitan of Boryspil and Brovarsky – Anthony.

According to him, representatives of Constantinople contacted the President of Ukraine Volodymyr Zelensky on the issue of transfer of shrines to subjugate Phanar, as promised by ex-head of state Petro Poroshenko.

“It did not work. Emmanuel (Bishop of the Constantinople Orthodox Church and Metropolitan of Galli) asked Epiphanius (head of the new Ukrainian church) for a report,” Antony told NewsOne.

According to Anthony, now the parishes of the Orthodox Church of Ukraine (OCU) must pay the Constantinople Patriarchate from €4,000 up to €20,000.

Such measures in turn caused dissatisfaction with the former head of the non-canonical Ukrainian Orthodox Church of the Kyiv Patriarchate (UOC-KP) Filaret.

not sure. sounds like a complete mess. mebbee taxing churches isnt a nice idea. might inject some stimulus into making churches more pro active? or just a straight attack

Dictionary defines lustration as a ceremonial purification, often with the use of water. A sacrifice, or ceremony, by which cities, fields, armies, or people, defiled by crimes, pestilence, or other cause of uncleanness, were purified. Sounds something like what the US did with its banksters.