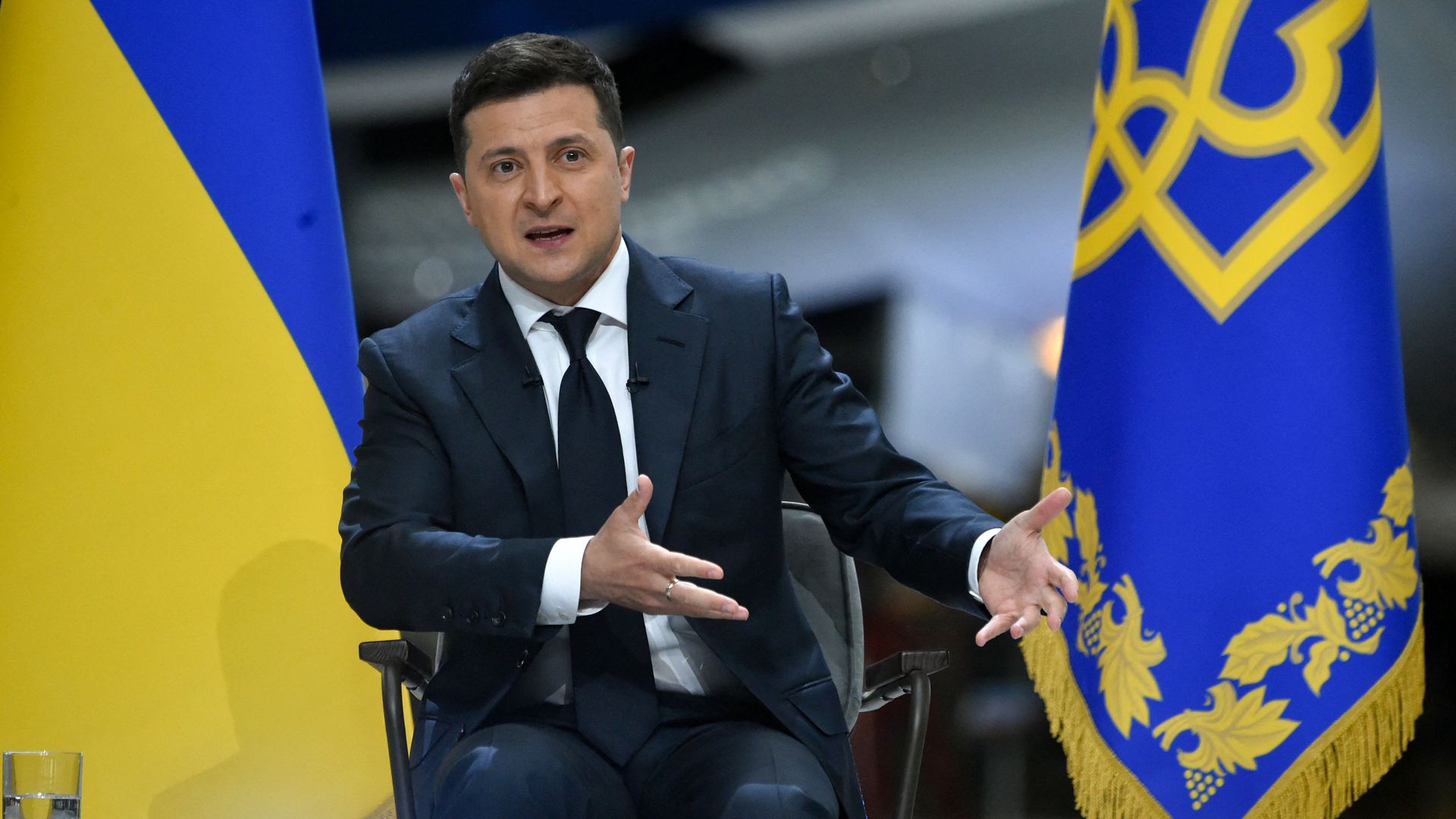 On June 7th, Ukrainian President Volodymyr Zelensky expressed his “surprise” and “disappointment” that US President Joe Biden allowed Nord Stream 2’s first string to complete, and that he wouldn’t meet him.

Zelensky still appears to not lose hope, comparing Biden to “Michael Jordan” who sometimes makes questionable “plays” that are part of a bigger plan to “score a three pointer and win in the end”.

“You know, that reminds me of how Michael Jordan used to play. He is my favorite basketball player, no offence to other wonderful NBA players, who are indeed galore. Even Michael Jordan very often used to lure his opponent, sometimes by demonstrating pretend weakness or even signs of illness. He had a variety of secret tricks for making his opponent feel relaxed and for imposing his own tactics onto him, imposing the false sense of close victory. And then Jordan would change his tactics dramatically, and he would grab the victory at the very last minute. That was part of his tactics. Therefore I still believe after all, that Biden is a Jordan in politics,” he said.

“I think that his final three-pointer is not in the net yet, and I would like to believe that this is all part of his tactics. If this is not the case, that will be a great pity, not only for me, but for the United States as well, I am sure. There will be a feeling that in these circumstances Russia will have a great chance to prevail over the United States,” he added.

His disappointment was exacerbated after on June 4th, Russian President Vladimir Putin announced the completion of the first string of Nord Stream 2.

The White House has called the pipeline “a Kremlin geopolitical project that threatens European energy security.” But Biden nonetheless backed off U.S. sanctions on the company working to finish the pipeline.

Zelensky said he has moved past anger and would now describe his feeling as one of disappointment. He also said Biden had offered him “direct signals” that the U.S. was prepared to block the pipeline.

“This is a weapon, a real weapon … in the hands of the Russian Federation,” he said. “It is not very understandable … that the bullets to this weapon can possibly be provided by such a great country as the United States.”

Still, Zelensky hoped that Biden would meet him before the Putin summit sometime in June. His wish, however, was denied.

“The State Department has regularly engaged with Ukrainian officials regarding Nord Stream 2. Prior to the transmission of the most recent report to Congress, the State Department notified the Ukrainian ambassador in Washington and senior officials in Kyiv, including the president’s chief of staff, of the contents of the report,” a White House spokesperson told Axios.

“The administration is committed to continuing to consult with Ukraine as we press Germany to address the risks Nord Stream 2 poses to Ukraine and European energy security. We also welcome Ukraine’s direct engagement with the German government about their concerns.”

“When President Biden meets with President Putin in Geneva, he will stand up for Ukraine’s sovereignty and territorial integrity, as he has done in both of his earlier calls to President Putin.”

There were considerations to invite Zelensky to Washington, but the plans were cancelled after the Ukrainian president decided to replace the management of state energy company Naftogaz. That move led to concerns in the administration he was backsliding on anti-corruption efforts.

The White House says it proposed the Putin summit to seek a “stable and predictable” relationship with Putin, to Kiev’s disappointment.

Zilenski will be more dissapointed when US/Nato loses the coming war with Russia in Ukraine.

Do you remember that NATO thought they would be holding a very large exercise on Russia’s borders, only for Russia to send a few servicemen to the borders, with their toys, and 4-5 times more than what NATO could supply?

Then you have Russia closing down various ports near their borders, in the Black Sea. So NATO could not send their toys to the area.

Not forgetting the intelligence that Russia has, with regards the attempted assassination of the President of Belarus, the attempted coup d’erat and the arrest of the Nanzi boy on the Ryan Air Flight?

Then you have the saner NATO members, who have no desire to go to war with Russia, on behalf of Ukraine. Nord Stream II is now virtually complete and Ukraine will shortly find themselves completely on their own, except for their City of London friends.

the heart of NATO is Germany and it is not in their interest to fight a war with one of their best customers. its ridiculous anyway you cut it. the cesspool in London has great ideas but they need some country to sign on to be a battlefield and supply the soldiers….

I’m going to be like that India Zion wannabe.

To that cow piss drinker grow the fuk up kid.

Zelenclownsky is a comedian, what you expect.

This all happened after the attempted coup d’erat in Belarus. The attempted assassination of the President of Belarus and the arrest of the Nanzi ‘Azov’ member, who was on that Ryan Air flight. I wonder what Russia told Biden when discussing the situation with Nord Stream II and concerns of Ukraine? I wonder what President Putin will be discussing with Basement Biden and how things have panned out over the last three months?

Zelensky hasn’t yet realised that he and Ukraine are insignificant in washingtub’s master plan. Ukraine is merely bait for the bear. Zelensky should relax, and have another cookie.

Yep the U.S. regularly consults the Ukraine saying how much do those as*holes want now, your as valuable as fly s*it in pepper which means your nothing but a useless tool whose shelf life ran out last month.

What does this pathetic clown ant Biden to do blow the pipeline up?

I have to admit to being amused. In his first 6 months, Biden, who everyone hates, removes troops from Iraq, removes regular troops from Afghanistan, now drops Darling Trump’s sanctions against companies completing NSII and leaves Ukraine swinging in the wind. Biden even had the nerve to cancel the oil stealing company’s license in Syria and is even trying to re-engage Iran on JCPOA. But when Darling Trump was in, with his full blown neocon admin, who never removed any troops, gave a license to steal Syrian oil(because we like oil), demanded more NATO shenanigans, dumped every missile treaty and even open skies, increased KSA weapons sales 5 fold (because we like money)…but he was the sane savior of the world. Biden even refused to french Bibi’s ass and Bibi is now out…but Darling Trump gave Bibi all he wanted, including what was not his to give, but he was going to get rid of the Zionists and neocons. As with those who still hate Obama, who refused to go to war with Iran for Israel and gave us the JCPOA, their Darling Trump ditched it, then assassinated Soleimani, added the ‘maximum pressure’ sanctions on Iran and was going to bring peace with his fantastic, wonderful, deal of the century peace plan for Palestine. Biden must be playing 10D chess and going for the jugular later. Now I wait to see how Biden will help KSA even more than Darling Trump did, if that is even possible. Even as I expected these things, as they are part of a good cop, bad cop scenario…many said how wrong I was and that Darling Trump, career criminal, was our great hope. These people should remember, they told me I was wrong. I even said nothing would come out of the Ukraine debacle and that it would bite Trump in the ass, but again, I was wrong. Did I forget to mention, now that Darling Trump is gone, how many are now actually saying bad things about Israel and anti-BDS in the US? Not to mention that damn Biden is actually proposing and asking money for infrastructure spending. The nerve of him, Darling Trump was going to, but just didn’t get around to it.

always remember: why are biden’s puppet artists wanting him to do/say/read out this or that? we all know he is just an actor and not in control of anything (so was trump ofc) – it’s the deep state that is in control. what is he doing right now and why?

Funny, it still will not post, but these two posts did? How strange. Maybe if I use my VPN? Nope, still won’t. I’ll have to check for ‘key words’. I posted this and edited it twice now????

Well, I don’t know what to say. I’ve tried everything and my comment will not post. Damn, it’s not like there is any great revelations there…just my opinion. I even tried to post as a original post, not a reply, but no dice. No cuss words, no name calling, not overly long, VPN, no VPN…WTF?

They are all muppets, it does not matter which one.

the master plan of Biden’s; in so far as he can remember; is taking bribes and hanging Ukraine out to dry

Suck harder Zelensky, then maybe Joe will notice you down there on your knees. Jk, you’re just his disposable little bitch, nothing more.