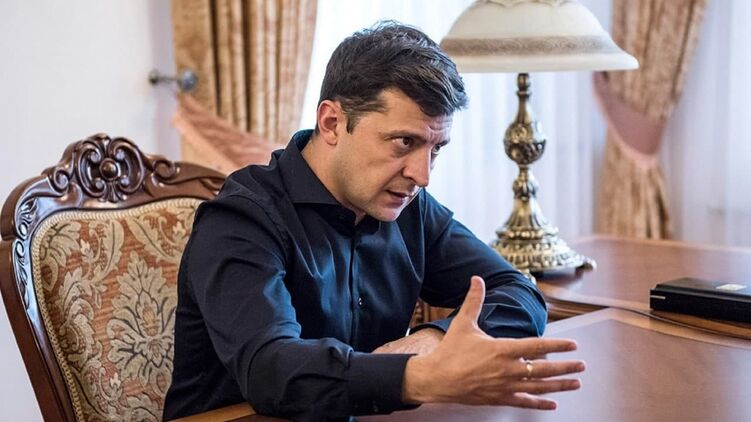 UPDATE: Surprise, surprise! The most democratic country around the world, the United State, released a statement in support of the total censorship in Ukraine.

“The United States supports Ukraine’s efforts yesterday to counter Russia’s malign influence, in line with Ukrainian law, in defense of its sovereignty and territorial integrity. We must all work together to prevent disinformation from being deployed as a weapon in an information war against sovereign states.”

Ukrainian President Volodymyr Zelensky introduced the decision of the National Security and Defense Council of Ukraine on the imposition of personal sanctions against the Ukrainian Member of Parliament Taras Kozak.

Kozak is a member of the Opposition Platform – For Life. These personal sanctions came together with sanctions targeting opposition-aligned media.

On the evening of February 2, the press service of the Office of the President reported that Volodymyr Zelenskyy signed a decree on the imposition of sanctions against MP of Ukraine from the Opposition Platform – For Life faction Taras Kozak, as well as eight limited liability companies for a period of 5 years, she said.

“In accordance with Article 107 of the Constitution of Ukraine, I decree: to put into effect the decision of the National Security and Defense Council of Ukraine dated February 2, 2021″ On the application of personal special economic and other restrictive measures (sanctions),” the text of the decree said.

These sanctions included the blocking and censorship of three channels on Ukrainian television for being loyal to the opposition.

Yuri Boyko, the head of the Opposition Platform – For Life, promised support to three TV channels.

“The blocking of three TV channels disloyal to the authorities and sanctions against an opposition MP without trial or investigation – there has never been such an unprecedented attack on democracy and freedom of speech in the entire history of independence. This is a direct violation of the Constitution and laws of Ukraine and the road to the establishment of a personal dictatorship in the country. …

It is doubly tragic that this step was taken by the president, from whom they expected peace and progress. Restoring citizens’ rights and protecting democracy. Today, these hopes have completely dashed.

Volodymyr Zelenskyy did not live up to the expectations of citizens and turned out to be incapable of constructive dialogue. He responded to criticism with reprisals, and such a step plunges the country into a new political crisis.

Our political force is ready to provide all the necessary political and legal support to our party member and repressed media. We will not be stopped by political repressions, we will not stop fighting for the rights of Ukrainian citizens, for peace and democracy in Ukraine.

Truth and Law are on our side, justice will be restored.”

This very open and unadulterated censorship.

This is not the first time these TV channels were targeted. Back in October 2020, The National Council for Television and Radio Broadcasting has appointed off-site unscheduled inspections of the Z ZIK, 112 Ukraine and NewsOne TV channels in connection with the revealed violations related to the election campaign, according to the website of the National Council.

This is regarding the broadcast of the meeting of one of the leaders of the Opposition Platform – For Life party, Viktor Medvedchuk, with Russian President Vladimir Putin in Moscow.

“The topic of discussion was the establishment of relations between the Russian Federation and Ukraine, the supply of the Covid-19 Sputnik V vaccine to Ukraine and the celebration of the 75th anniversary of Victory in the Great Patriotic War,” the statement said.

“The members of the National Council unanimously voted for the appointment of Novosti 24 Hours LLC, Teleradiocompany 112 TV LLC and Teleradiocompany New Communications LLC for unscheduled inspections. This procedure is provided for by the current legislation to identify and record the facts of compliance or non-compliance by licensees with the requirements of paragraph nine the second part of Article 6, paragraphs a) and c) of the first part of Article 59 of the Law of Ukraine “On Television and Radio Broadcasting.” According to the results of inspections, the relevant legislative norms of the decision will be adopted,” the message read.

And while Zelensky is busy censoring his opposition, a large-scale conflict among the highest ranks of the army is brewing in Ukraine.

An unprecedented case – the command of the Armed Forces of Ukraine, the General Staff and the Air Force is suing Defense Minister Andrei Taran.

The commander-in-chief of the Armed Forces of Ukraine Ruslan Khomchak, the head of the General Staff Sergei Korniychuk and the commander of the Air Force Sergei Drozdov are suing the Defense Minister.

In addition to them, the former head of the medical forces Igor Khomenko, who was recently fired by the head of the department, is in conflict with the Minister of Defense. All of them filed a lawsuit against Taran and refuse to carry out a number of his orders.

Advisor to the head of the President’s Office Alexei Arestovich connects the conflict with the fact that the heads of these departments have overlapping powers, and their decisions on many issues contradict each other.

“The reason is that they did not legally delimit the powers of the Minister of Defense and the Commander-in-Chief of the Armed Forces, when these positions were divided. best friends, but in a week they will become the worst enemies. The profile committee of the Verkhovna Rada also understands this, the task for this year is to delimit their powers at the legislative level, “Arestovich said.

He confirmed Vereshchuk’s information that the Ministry of Defense and the relevant committee of the Ukrainian Parliament are already working on a relevant bill, which should be put to a vote this year.

Arestovich also condemned the very fact that the generals are suing the head of the Ministry of Defense.

“The situation when generals in a belligerent country sue the Minister of Defense is nonsense. It just won’t put on your head. The essence of the conflict is that the generals believe that the Minister of Defense has exceeded his authority and had no right to give him a severe reprimand. Whether it is true or not, nobody really knows. Because many bylaws are outdated and need to be rewritten. And after the division of the posts of Defense Minister and Commander-in-Chief of the Armed Forces, this was not done. Therefore, we now have a legal conflict. But even in this situation, the generals could not make such a public demarche, realizing what image they create for the military-political leadership of the belligerent country. But, apparently, they do not think so,” Arestovich said.

They have a conflict, because they have overlapping power, but essentially, the President can’t do anything because he’s busy with enforcing democracy on those that disagree with him.

A Jew Joker at the head of a Nazi nation, what could possibly go wrong?

Sooner the Dneiper River (source Valdai Hills, Smolensk, Russia) is dammed off to give the Ukrainian Nazi’s something to think about, the better.

LOSER WEBSITEąąą WITH YOUR STUPID LIES AND PROPAGANDA FROM RUSSIA YOU WILL ALWAYS LOOK LIKE LOSER. FUNNY HOW IDIOTS WHO VISIT THIS WEBSITE BELIEVE IN ALL THIS SHIT YOU MAKE UP. SUCH A DUMB VISITORS.