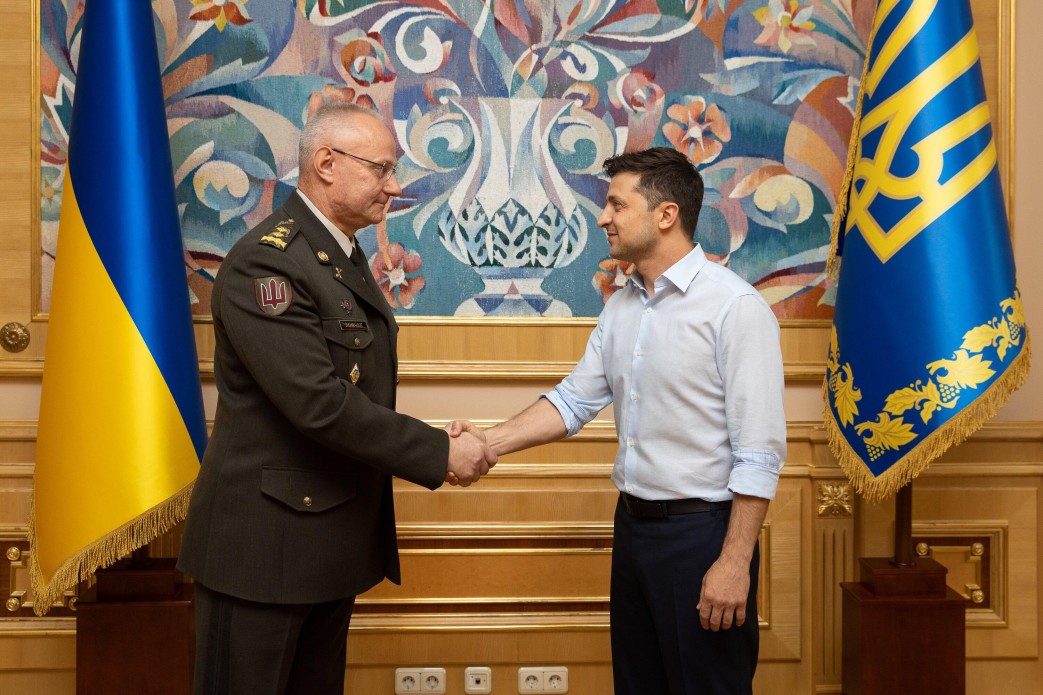 On May 21st, in one of his first actions as President of Ukraine, Volodymyr Zelensky issued a decree with which he dismissed General of the Army Viktor Muzhenko from the post of Chief of General Staff – Commander-in-Chief of the Armed Forces of Ukraine.

He further appointed Lieutenant General Ruslan Khomchak to the post of Chief of the General Staff – Commander-in-Chief of the Armed Forces of Ukraine.

Muzhenko had been the Chief of General Staff of the Ukrainian Armed Forces since July 2014, almost 5 years.

Lieutenant-General of the Armed Forces of Ukraine Ruslan Khomchak served as chief of staff of the land forces of the Ukrainian Armed Forces from 2016 until now.

Both Muzhenko and Khomchak took part in the fight against self-defense forces Donetsk and Luhansk in the Donbass. Ruslan Khomchak was the Chief of South Operative Command in Donetsk, which took part in the ongoing conflict in eastern Ukraine.

Khomchak is the general who ordered the Ukrainian troops to leave Ilovaisk encircled in August 2014.

In August 2014, Khomchak’s was head of the “B” sector of the Anti-Terrorist Operation Zone. The commander of the operation Muzhenko ordered to surround Donetsk. The Armed Forces of Ukraine should have blocked the main routes from Gorlovka to Donetsk, while from the south other divisions should have occupied Ilovaisk and Khartsyzk.

The operation ended with the defeat of the sector “B” troops. According to Khomchak, after losing the fight and surrendering. The Ukrainian forces were allegedly allowed a humanitarian corridor, but during the withdrawal they were ambushed and 108 soldiers were killed.

Khomchak said he was amazed to see so many enemy troops. “The woods bordering the fields were swarming with soldiers and armor,” he said. The convoy continued along a field road until it reached the outskirts of Starobesheve. “When we passed their second checkpoint, they started shooting at us like in a shooting gallery,” he recalled. “It was an ambush.”

Him and a dozen of soldiers managed to escape the ambush, ran on foot for two days and managed to reach the Ukrainian lines and save themselves.

Recently, Ivan Aparshin, Zelensky’s Defense Advisor promised to name the people guilty of the Ilovaisk debacle, of the Debaltseve battle and the surrender of the Crimea.

Also on May 21st, Zelensky signed the decree to dissolve the Ukrainian parliament.

The legal status of Zelensky’s move to dissolve Parliament remains uncertain, he claimed on Tuesday that he has the authority to disband the legislature because “since 2016, there has been no coalition.” But the leaders of the two biggest factions in the parliament – Petro Poroshenko and Yuliya Tymoshenko appear to not be challenging the decision.

The new US Ambassador to Ukraine, is rumoured to be some guy, who run one of the private mercenaries units the US sent to Ukraine, to fight those in Donetsk, back in 2014 and to train the Ukraine Nazis. Will find the article from Stalker Zone, who are a wealth of information on Ukraine.

The Possible Replacement of Kurt Volker in Ukraine… https://www.stalkerzone.org/the-possible-replacement-of-kurt-volker-in-ukraine/

Here are another couple of their articles, and look how they link up.

If the comedian from Ukraine has been given orders to either go with the US or go with Koloimoisky, as Trump is not a happy bunny, concerning Koloimoisky and US involvement in the 2016 Presidential Campaign. Then you have the fact the IMF are moving out of Ukraine, and one of the reasons is handing Privat Bank back to Koloimoisky.

Trouble in paradise for the comedian? Or am I just assuming?

The IMF Reduced Its Schedule of Work in Ukraine & Will Not Revise the Cooperation Program… https://www.stalkerzone.org/the-imf-reduced-its-schedule-of-work-in-ukraine-will-not-revise-the-cooperation-program/

Oleg Tsarev: The US Gave Zelensky a Tough Ultimatum… https://www.stalkerzone.org/oleg-tsarev-the-us-gave-zelensky-a-tough-ultimatum/