The People’s Protection Units (YPG) appears to be releasing fake videos claiming that they show strikes on the Turkish Armed Forces and its peoxies in the northern Syrian area of Afrin.

According to the release, the YPG attacked positions of the Sham Legion in the villages of Dersiwan and Nebi Houri. 4 pro-Turkish militants were reportedly killed and 5 others wounded. The shot was allegedly made with a anti-tank guided missile (ATGM)

The video is called “4 Faylaq Sham mercenaries have been eliminated in occupied Afrin” and was uploaded on December 15th on the “Rojava Defense Units” YouTube Channel:

Somehow, however, the Shaam Network S.N.N, also published a video that presents the exact same scenario, but also contains over 1 minute more of footage showing militants prepare to shoot mortars. This video was published on December 8th, 2015. Showing a Sham Legion militant launching an ATGM at an Syrian Arab Army vehicle.

On the same day, the YPG allegedly an IED to blow up a vehicle of the Sultan Murad Division militant group in the village of Qastal Miqdad. According to the YPG report, 2 militants were killed, and 2 others were injured in the attack.

It is named “The moment Turkish-backed terrorists were blown up by YPG in Afrin.” However the originial video uploaded on April 23rd 2015 show how Sham Legion militants load up mortars and target SAA soldiers on April 22nd, 2015.

Currently, the fake videos of the YPG attacks on Afrin cannot be found on the official YPG twitter account. However, they are available on the YouTube account used by the YPG to upload videos showing its attacks in Afrin: 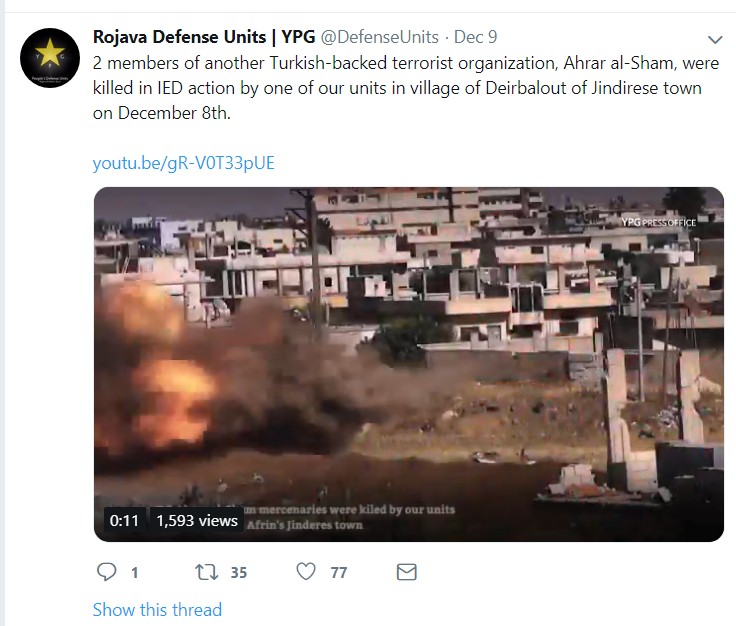 The official YPG website uses screenshots from the fake videos in its December 15 report on the alleged attack: 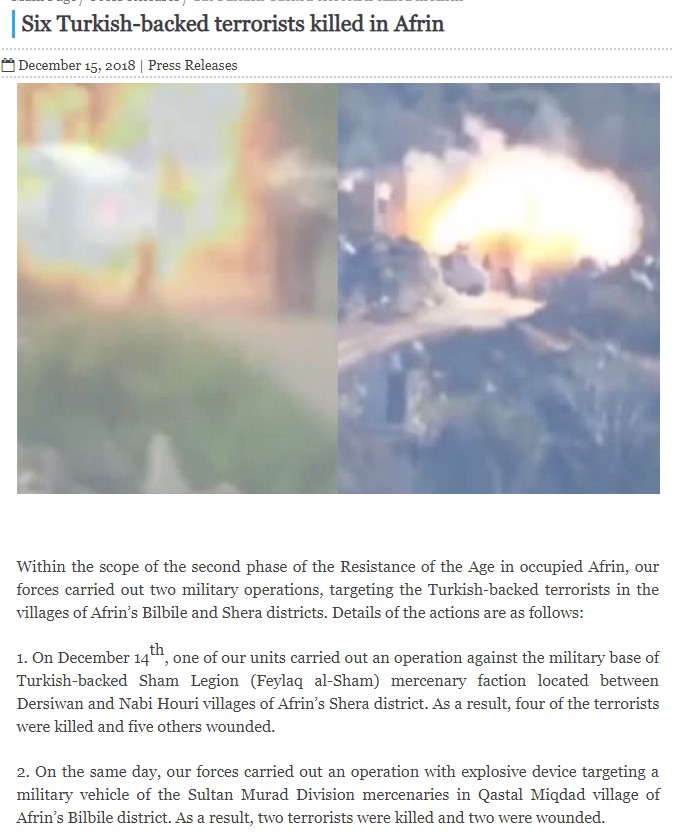 While there are no doubts that the YPG has really carried out attacks on Turkey-led forces in the Afrin region since the start of 2018, the December 15-like fake news are an important signal showing some problems within the group. Two key factors influencing the situation are:

Sounds like the Kurds are scratching their collective arxes while wondering what to do next : I have a suggestion to make: Enter an Alliance with the Syrian Army & Syrian State and forget about carving out a Kurdish mini-State on the East Bank of the Euphrates financed by Syria’s Oil Deposits.Then go a negotiate a new Syria post-war with all Parties and go fight with the Syrian Army to rid Idlib & Afrin of the pestilent Turks and their favoured Jihadi Proxies.

Once the U.S. forces withdraw there isn’t going be zero fucks given to the so called Syrian Defense Force.

the arab component will turn to turkish proxies or go back to the SAA, while the kurds will realize that they’ve been duped once again. They can’t say they’ve not been warned though, that relying on zionists would have been their worse choice and that they should had sticked together with Syria.

Pathetic. :] I assume SAA doesn’t want to start the next operation until all the holidays are over. But I hope that come end of january, SAA launches many strong offensives across the country and speed up the destruction of all terrorists. That’s the only thing that matters, that and kicking out Turkish and American invaders, this SDF delirious statements and claims are not much important.