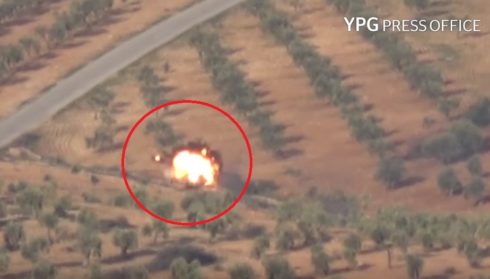 On Feburary 13, the media wing of the People’s Protection Units (YPG) released a video showing a new anti-tank guided strike aimed at an armoured vehicle of the Turkey-led forces in the Syrian area of Afrin.

Accordign to the video, the guided missile most likely hit an ACV-15 amphibious armored combat vehicle. Such vehicles are operated by both the Turkish Armed Forces and the Free Syrian Army. The incident took place in the area of Bulbul.

USA is giving weapons and intelligence to SDF.

Well done Erdogan. You destroyed Syria and Turkey is the next target.

Sunnis are always owned because they are so stupid.

Unity is strength. In Palestine all parties should work together as a joint government army. Each party should have own number like brigade 21,22,23 etc instead of political party name. President Mahmoud Abbas should give them legal status as Palestine army in a ceremony.

Abbas could do agreement with Russia and China in a meeting to give commando training and arm Palestine army with proper light weapons like AK-47 Kalashnikov, hand guns and heavy machine guns etc for self defence against Israel otherwise everyday Israel will bite them like snakes. A country without weapons cannot survive. Mahmoud Abbas has no time to waist. ————————————————————————————————————————————

If Mahmoud Abbas want to get rid of complete illegal European migrants (Israel) then after Trump Jerusalem decision Mahmoud Abbas should issue Fatwa by Islamic clerics that a country will be an enemy of Islamic religion and of Muslims who have diplomatic relations with Israel and US and have recognized the state of illegal European migrants (Israel) which is a Zionist terror headquarter. Abbas should send this message to all world leaders by post as well as on social media.

Good shot I guess, but I would rather hear the excitement in the 17-year-old YPJ ATGM-girl’s voice. The guy on this vid sounds like he’s already bored with taking out Turk head-choppers.

… looks abandoned too. Anyways, missile striked the top, if anyone was inside, they probably got a splitting headache but otherwise are fine….

The APC armor would have been shredded like tin foil. Only meant to stop an armored piercing machine gun round https://en.wikipedia.org/wiki/14.5%C3%97114mm

Yea… However a TOW has a shaped charge that turns into a ballistic arrow when fired, and in this case it probably clipped the roof and went flying into the wild blue yonder…

it’s a molten metal object called “jet”, not a ballistic arrow. I agree with you on the effects though, as it seems to hit the top armor horizontally, in that case it would form a hole longitudinally and then die out inside the armor.

If the jet doesn’t enter the vehicle interior likely damage is negligible, which is supported by the video being cut before any explosion takes place inside the vehicle.

What colour is the grass though John? I can’t quite make it out….

If you think these are irrelevant details, then go elsewhere and don’t read them.

There is people that see them as relevant. In addition, they could become even more relevant, if in future, some lies said by folks like you could be debunked by knowing some things that are not common knowledge.

In any case, it’s not a military secret how HEAT warheads work.

As always John I am in awe of your analytical skills.

so tell us, what is wrong about what i said on HEAT?

If you won’t even admit that the grass at Khmeimim air base is sometimes green what point is there in me discussing your analysis of a shaky, somewhat out of focus atgm strike?

You pretend you are doing rational, logical analysis. In reality you see what you want to see regardless of any evidence to the contrary.

you are wrong and i am right, that’s the only thing you say.

It’s not even analysis, it’s about the mechanics of a certain type of device, on which you show to know very little – in fact, you know very little of any technical aspect on military subjects – you’re only here to exploit some opportunity to make political criticism, always basing it on your (flawed) technical knowledge.

You offer no arguments, lest alone evidence, your posts contain only attempts at undermine the credibility of other posters.

Your jewish lawyer mindset doesn’t work here, your kind will have to start telling the truth, instead of trying to create another one or posting links made by yourself to support your ravings.

Pls notice, I don’t even have the need to post a single technical link on the above subject, go do your homework and come back when you’re ready to say something that actually makes some point.

Grow up, be a man and admit you were wrong…then we can talk technical and you can show off your immense military knowledge.

“You offer no arguments, lest alone evidence”

Here’s some evidence for you John (your last chance John to be a bigger man):

I have shared this link to a video with you before. You never refuted it. You ignored it because it shows you are wrong. Watch it again and then man up.

The first part of the video shows a Russian airport with cargo planes being loaded with goods to be airlifted to Syria. Underline plane are being LOADED, not unloaded.

The second part of the vid is a mix of the above with repertoire footage from Hmeynim taken at a different time.

This bellingcat kind of shit is really bringing you nowhere.

You never posted this vid before, surely not in reply of any of my posts, as you are mischievously claiming

Nice try John. You “know” it is a plane being loaded elsewhere because you must retain your halo of invincibility. In fact you have no idea where the air base shown in the video is.

On the other hand I do know where it is!

“The air base of Khmeimim functions in regular mode, the dispatch of humanitarian goods is carried out in accordance with the approved plan. A military transport aviation aircraft delivered humanitarian aid from Ingushetia, and representatives of the Center for the reconciliation of warring parties and the military police sent the first party to Damascus by An-26 aircraft. All transport aircraft during takeoff and landing at the air base are escorted by fighters.” https://voiceofpeopletoday.com/russian-planes-delivered-humanitarian-aid-to-syria/

Are you able to see beyond your tunnel vision? Do any of the elements sound familiar? Military police? An An-26?

The video shows Khmeimim airbase. Humanitarian supplies have arrived and are being RELOADED onto a An-26 for further distribution.

You can huff and you can puff all you want John but this is one house you can’t blow down with your hot air.

“You “know” it is a plane being loaded elsewhere ”

I know nothing, you is the one who knows (“On the other hand I do know where it is!”).

Even if things were as you say, and they are not, because you are connecting two unrelated different pieces of news from 2 different countries to make up your point, they would show that the SU-24s at Hmeynim took no damage of note from the 31dec. attack, as they are operating normally (this reinforced by the fact that if the vid is dated 5th January, it has been surely produced some days earlier)

The grass seen in this video is mostly of the “yellow kind” like in the pics of the attack aftermath released by the Ru MinDef and shown on this site. (don’t start again with the agriculture science racket), while those in the “attack” pics were of the “green kind”.

The SU-30 fighters supposed to be acting as “escorts” for the cargos have air to ground loads and 2 a2a missiles for self-defence, which seems more indicative of them acting on separate a2g missions rather than escort – but disregard this point as it’s too speculative.

In any case the MinDef had admitted two casualties and a couple of planes damaged, so I don’t get what the fuck you’re looking from me.

To finish up, I had summoned you on the page that shown Hmeynim satellite pics with no green grass, but you were not available for arguing.

I see you have become obsessed in trying to discredit all those that post comments that have real contents which counter the pro-terrorist propaganda, and to this aim you went digging up material from two months ago in response of a post that talked about a completely different subject for which of course i’m still waiting a reply.

You can lead an ass to water but you can’t make it drink! :-)

true. it’s what happens when people are forced to make an opinion based on the unknowns rather than the truth, because someone has all the interests not to reveal it.

Well rather clearly it’s brown dirt and with surrounding orchard…

TOW is an ATGM and has HEAT warhead – ie a shaped charge is projectile with an inverted cone in nose that creates seal on impact and triggers a focused plasma jet of hot metal on small area to penetrate armor. Kinetic based armor penetration is based on the Sabot projectile – two part projectile that launches an inner arrow like rod – often of depleted uranium – that uses sheer momentum to penetrate armor.

John Withehot. “Fagot” is the 9k111 AT missile…..but in the slang “Fagot” is another thing.

yea. it was meant to be a joke about ypg.