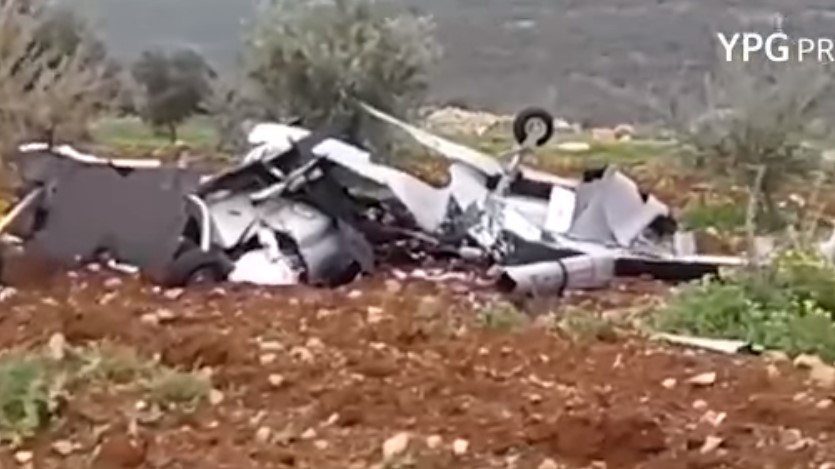 On February 12, the media wing of the People’s Protection Units (YPG) released a video showing a wreckage of the alleged Turkish unmanned aerial combat vehicle (UACV), which had been shot down by YPG fighters.

According to the released video, the wreckage is allegedly belonging to the Bayraktar Tactical UAS UACV. If this is confirmed, it will be another blow to Turkish forces involved in the operation against Kurdish forces in the Syrian area of Afrin.

Last week, the YPG shot down a T129 ATAK attack helicopter, which crashed in the Turkish province of Hatay.

kurds are like polish in WW2. Polish grabbed lands of Germany helped by France andGB and USA. Germany wanted to recover their lands and asked Poland to gove back lands. Of course, those filthy Britain, french and Americans interfered in the process to stop it.

In the same way, now, kurds grab syrian land. You can’t negotiate because USA will interfere in the process. You can’t recover lands because, if you attack SDF, USA will attack you like France and GB attacked Germany in WW2.

So, how will you recover lands taken by USA ???? XD. Of course,it will have been easier to prevent instead of treating. But, when you say so, people start talking non-sens.

Seriously poor knowlege of history, this is the only thing you are really serious about…

You can call me Al
Reply to  Störtebembel

No offense, but you are one of the few that hasn’t blocked the troll muppet. Don’t waste your time on it.

Well it was the Polish Bolshevik Jews who started the invasion of Poland by killing nearly 6k ethnic Germans in the most brutal fashion nailing babies and children to barn doors etc.,further 58,000 were genocided and forced to leave Poland. Hitler gave the Government time to answer and since nothing was forthcoming after 6 weeks he invaded Poland. Though he did get the perpetrators.

…see that’s how grown ups do it. They took down Turkish drone – without blaming everything on Iran and then proceeding to bomb Turkey…although them having no air force maybe played some small part in the decision making process… ;-)

That’s the middle east culture. They always talk about what they can’t do.

You are missing the reverse psychology, it categorically states “Turkish” instead of “Turk”, it is very clever so I don’t blame you for missing it:

The “ish” is added on purpose because it means “Iranian Shi’ite Homeland” …… do you see what I mean now ?.

PS Sorry that was so lame, even for me.

Rachel
Reply to  You can call me Al

To people that didn’t know; UCAVs fly at a HIGHER altitude than F-16s. I suppose PKK took it down with their own F-16, or, somehow, they have SAM systems(I KNOWWWW :DDDDDDDDDDD)

So you think it was hit by a kurdish lark or crow?

UAV can be shot with a simple rifle, when flying low enough….

And? this doesn’t change anything.

Yes, it does. UCAVs do not need to lower their altitude since they use Int. Ammunutions. They fly at a higher altitude than jets. It’s their most important feature. Insanely effective against geurilla fighters.

People miss it but PKK in the last 3 to 4 months were able to launch only 1 or 2 offensive agains Turkey. Because they are beaten back to Qandil Mountains and this was achieved mainly thanks to Turkey’s newly and domestically developed UCAVs(SIHA).

It must be noted that USA did not sell a SINGLE Drone/UCAV to Turkey because they knew PKK would be destroyed by them.

So the UAV crashed alone?

The guy in the video says its a UCAV not UAV. UCAV can’t be show down from the ground that easily.

Anywho, i doubt if that video is correct or not, because 100% sure there would be a video of a PKK rat checking the wreckage.