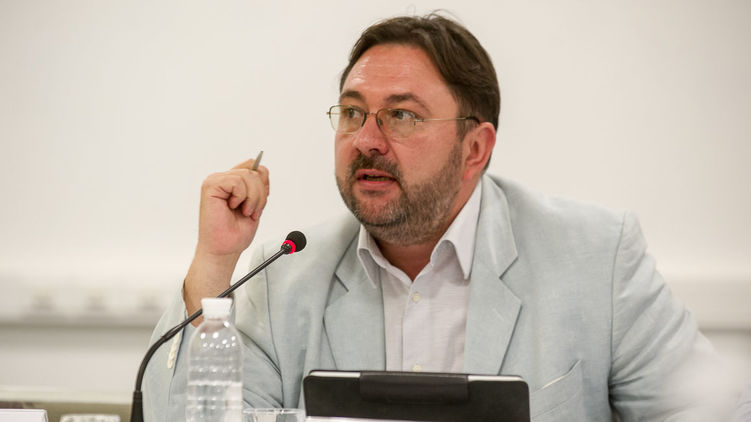 Nikita Poturaev, an adviser to Ukrainian President Volodymyr Zelensky, and one of the chief “political technologists” of the Servant of the People, told the new MPs of the party that they are “nobody,” a transcript published by Strana.UA showed.

“Let’s see before we start working (and I will work with you) who we are. This is very important. That is, now you mistakenly think that you are all politicians. This is a big mistake. The answer is: no, you’re not. The first client I worked with was was Yulia Tymoshenko starting from 1996. Look, there is a sociological quote about everyone here. An amendment to the turnout, back and forth. In totall, you’re almost 45. How did this happen? How did you get here? I will explain how. Because my job is to explain how. You ended up here because the voter was looking for politically motivated people. The party “The Servant of the People.” And he didn’t care what name would be in the ballot. Volodymyr Alexandrovich Zelensky won the elections. This has already been told to you, and I want to draw your attention to this again: all of you, and me included, a person who has been involved in political technologies since 1996, while many of you went to kindergarten at that time … You are all political nobodies. I want everyone to hear it. You are actors in real life, but you are not political actors. What is a party? This from English means “part”. Part of society. You are not a party yet, but you have to become one. You need to become political actors. This is your task for this week. We want exactly that. I know, and believe me, everyone knows. Everyone knows about it. Dmitry knows about it, Alexander knows about it, I know about it. There are some people already on their phones. I see it. Someone is thinking about how to go to Lviv. Someone is thinking about how to give up- ok! It is your right. You were nobody, but those who stay will become someone,” Poturaev told the party’s MPs.

According to an anonymous source of Strana, in the “Servant of the People”, the performance of Poturaev caused a very mixed reaction among the future MPs.

“Many, to put it mildly, sighed when the first thing that started to clarify, and at who Poturayev is in general, who is he to say that we are nobody? When the organizers of the event tried to position themselves as leaders of the faction, it caused laughter. When we heard Poturaev’s statement, many deputies, especially majority ones felt offended. And what could be the reaction in adults? There are not only students sitting there, but also adult mature people who, such as Poturaev, will not take a decent job. In short, the shocking lecture had an opposite effect than what was expected”, the source said, as he was reportedly present at the lecture.

He clarified that he would try to convey to the leadership of the party and the president the idea that it is not the right strategy to communicate with people through such strange intermediaries as Poturaev or David Arakhamia (4th number in the list of “Servants of the People”).

“It’s not necessary between us, adults, to establish a separation in the face of “Poturaeva-Arakhamy”, inspired by the ideas of Peter Alekseevich and trying to monopolize influence in the faction. This will not happen,” the source said.

As of July 29th, the training courses for the newly-elected MPS from the “Servant of the People” started (in total 254 people entered the Ukrainian Parliament from the party). The deputies will be trained to work in the Parlaiment by specially invited trainers, including specialists from the Kiev School of Economics. During this time, they will get a quick run down of macroeconomics, get an idea of ​​the budget process, public communications, and the norms for creating bills.

These training courses could potentially be quite useful, since 70% of the elected MPs, following the July 21st snap general elections in Ukraine have had no previous experience in politics whatsoever. However, their content causes serious doubts about the real goals of this effirt.

Translation: ‘Listen, you new MP’s, you are powerless nobodies, so don’t even think about getting out of line, because you and the whole ‘Servant of the People Party’ are merely the disposable front organization of the self serving oligarch Kolomoisky.’

Servant of the People Party. Who are the People – I’m sure it does not include the goyim.