Colonel Turki al-Maliki, a spokesmen for the Saudi-led coalition, revealed during a press conference how the Houthis managed to turn Soviet-made R-27T and R-73E air-to-air missiles into ground-to-air missiles.

The Houthis likely got the R-27T and R-73E missiles from airbases of the Yemeni Air Force, which they captured during 2015. The Yemeni Air Force used to operate these types of air-to-air missiles and others like the R-27R on its Mig-29SMTs.

The R-73E has a range of 30km, while the R-27T has a range of up to 70km. The Houthis likely chose these missiles because the both types are guided by infrared homing, and has the “fire and forget” feature. Other types of air-to-air missiles like the Soviet-made R-27R are guided by semi-active radar homing, which make them harder to turn into ground-to-air missiles, because this type of guidance system requires support from a separate guidance radar detecting the target for the missile. 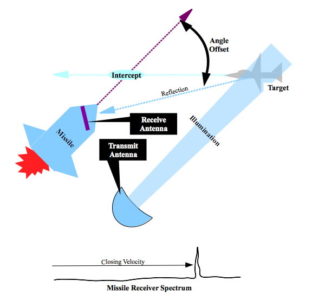 In order to launch R-27T and R-73E from the ground, the Houthis installed missiles and their launch rails on trucks. The missiles seekers were supplied with electricity from a separate generator because the missiles batteries last for few minutes only. 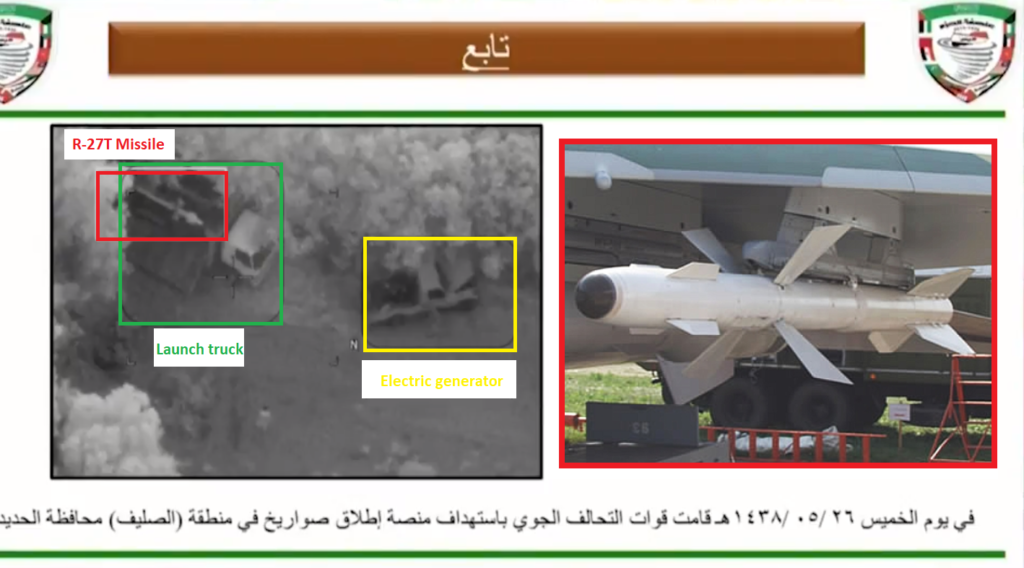 However, the Houthis don’t add a rocket booster to the missiles to increase their range. Air-to-air missiles lose at least a half of their range when they are launched from the ground because they are originally designed to be launched from warplanes on high altitudes and speeds.

During the 1999 NATO operation in Serbia, the Serbian Army also modified R-60 and R-73 air-to-air missiles to launch them from the ground against NATO warplanes. However, unlike the Houthis the Serbs solved the range problem by adding rocket boosters to the missiles, which acted as a first stage and gave the missiles a longer range even though they were launched from a static armored vehicle. 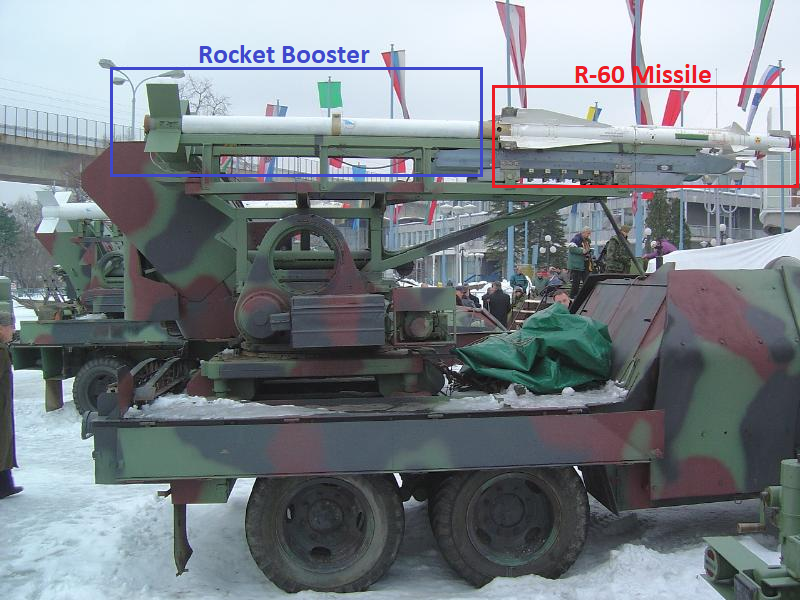 These modified air to air missiles were also likely used to target an F-16 warplane of the UAE Air Force over the Yemeni capital of Sana’a on June 8, and a F-15 of the Royal Saudi Air Force On May 21. However, both warplanes were not shot down.

The Saudi-led coalition accused Iran of helping the Houthis to modify these air-to air-missiles. However, experts believe that such modification can be made by any well-trained military engineers who worked with these types of missiles before.

And at high speeds too; the initial speed of the launching platform is a vital parameter to the kinetics of the aam

True but still for low range for something like UCAV drone mq-1 reaper this will do or some Jet if its on some low altitude or close to the launch it will bring it down. After all this is all experimental and modified missile, Yes of course its original use its to be shot from fast rolling Jet, but it can sometimes be useful like the mq-1 reaper that they shot it down. You never know. We all know that for proper and successful shooting and bringing down anything from the sky needs homing beacon and radar and guidance etc.

these kind of systems are sorts of hand-made, soviet version of the Chaparral.

The Chaparall is a US made SAM basically putting Sidewinders on a tracked vehicle. It’s an outdated system, inadequate to front anything else than helicopters flying low and slow, and basically overlapping with the latest marks of the Stinger systems.

The sidewinders have an air to ground capability, provided that the intended target presents a huge thermal difference with the background terrain. It also has problems tracking a single hot target stacked together with thermally similar objects.

The early marks of the R-73 and R-27T share the same IR seeker and were considered superior in all aspects (seeker sensibility, gimbal freedom and agility, angular tracking speed, and kinetics) to all the short range aams made in the west in the 80ies.

Nonetheless, they don’t have a a2g mode, at least none I’ve read about. They are LOAL weapons and the operator needs to have at the least a tracking system boresighted with the missile seeker in order to acquire and attack a target (after receiving confirmation of a good lock with visuals and audio cues).

All in all, my take is that unless they performed some ad-hoc modification to the missiles themselves (most unlikely) , the reliability of these weapons is close to zero.

They don’t need a2g because they are used as g2a and it’s a hack anyway. You also seem to confuse R-27T and R-73 with R-27R. Of course they are not supposed to perform area denial to modern fighter jets. If they have to perform airstrikes from higher altitude it’s already a gain. This can be achieved even with 33% coverage of main targets.

I don’t, and there is no hint in the text that would suggest that.

“They don’t need a2g because they are used as g2a”

I was speculating a possible usage in g2g mode by the houthis or whoever did the modifications. I didn’t state it explicitly in the comment, I mistakenly thought it was evident. In any case I’ll try being more scholastic next time.

About the confusion: the infrared seeker works at an angle up to 40 degrees. No need for boresight since that is a practical “off-boresight” capability. The R-27R has more needs, hence I deduced you confused them.

If the Iranians were helping them the Houthis would be getting MANPADs.

This video feature a manpad: https://www.youtube.com/watch?v=RX-YLA44TpY and many manpad were seized to Houthis (some come from Saleh stockpile).

Nice ones keep shooting them down, scum of US shit and that Wahhabi Sunni motherfuckers Saudis fuck them all and kill them all.

Must we fuck them before we kill them? lol

The ‘Saudi’ planes bombing Yemen on a daily basis are actually British RAF planes, flown by RAF pilots, p[erating under Saudi ‘colours’. The RAF has its biggest bases in RAF history in KSA.

Blair, in one of his many demonic acts, passed laws making it possible for any serving British armed forces member to IMMEDIATELY ‘transfer’ to the military of a foreign power (with permission, of course), and thus be described in the press as a ‘memeber’ of that foreign power. A PAPER LIE that allows the BBC and all the other zionist outlets to misdescribe the nature of any war of aggression.

This idea of virtual mercenaries was something the Americans had been doing forever with their ‘advisor’ program. Blair simply codified it- allowing the British to operate under the flag of any other nation- and to be reported as simple that nation.

KSA has a TOY ARMY. Some princes fly KSA jets BADLY. It’s all for show. On the ground in Yemen, Saudi forces are actually almost 100% mercenaries from cr-p-hole muslim nations, especially in Africa.

The massive British (and French and American) build up in the Middle East is in readiness for the coming Iran war. Britain bombs Yemen partially for practice and partially to normalise the lie – for the first wave of attacks on Iran, to be blamed on KSA, will be by western powers.

“When the going gets tough, the tough get going”, Houthis have managed to make do with what they have and develop it to suit their needs.

“the Houthis likely managed to shot down a United Sates MQ-9 Reaper unmanned combat aerial vehicle (UCAV) over the Yemeni capital of Saana using their modified air-to-air missiles on October 10.”

LOL no… This video is clearly showing a conventional manpad.