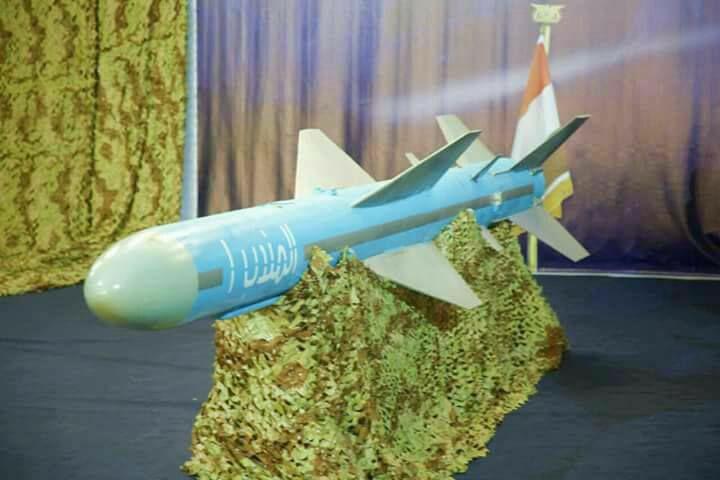 Yemen’s Houthi-Saleh forces have showcased their “domestically developed” anti-ship missiles “al-Mandab 1” and threatened to target with them  warships of the Saui Navy soon.

The missiles will reportedly be used against warships involved in the Saudi-led naval blockade of Yemen.

According to experts, the al-Mandab 1 is likely based on a C-801 subsonic Chinese anti-ship missile. C-801 missiles appeared in Yemen with Chinese Type 021-class missile boats purchased by Yemen in 1995.

You can’t f*** without taking one in from behind.

i read that this was the new Iranian missile presentation…..i dont think the Houthis have the technology for that

well we will se….

These are probably repainted iranian missiles in yemen, or on the way to yemen like we have seen before.

i dont think its likely they have such missiles. they are almost completely blocked by saudis. even if Iran wanted to give them to Yemen, how could they be transported ?without the Saudis knowing?

Exactly, something that many people miss, especially the Saudis themselves whilst threatening Iran.

Smugglers . Been doing it for thousands of years.

Are you nuts? or pure ignorant? that is western music playing.

Iran has cloned the C-802 design and produced their own versions. They also have plenty of trained radar and missile operators. Their Revolutionary Guard is probably involved in the Yemen business up to their eyeballs, as they were in the Sadr stuff in Iraq.

if Iran was really involved the Houthis would be getting MANPADs and other anti-aircraft weapons that Iran makes, not AK-47’s. The Yemenis can make their own missiles.

Yemen has had ballistic missiles since the 70s.

But the old supply of missiles and surviving launch vehicles may be running very low. The number of launches 1 year ago was much more frequent. The situation in N Yemen is not positive for the population at all. SCREW SAUDI ARABIA AND THE CROWN PRINCE !!

Hear hear. But we probably have to wait a looooong time, perhaps when the hell freezes.

HAHAHA…now that’s funny. As if trump doesn’t know. How f’ing stupid would he have to be not to know what almost everyone else in the world, except US voters, already knows?

Trump was threatened and intimidated by israhell . He has become pro Israeli lobby puppet.

Trump is puppet and supporter of Israel, not even the brainwash propagandists can deny that. And he will always be.

The Yemeni have nothing to lose now that their last port has been closed. Start sinking every ship of hostile regimes, missile attack UAE and KSA capitals relentlessly and see how they like it. It’s not like that would encourage worse treatment than they are already being subjected to.

Its a very old conflict. Fx Nasser and Egypt was there too.

All the small countries should a quite anti ship,intercontinental,Bolistic missile for self defence against USA threat.Now or not Yemeni should destroy any coalition ships.Make sure all USA weapon carriers never return from Korean Penenzula.Don’t be scared there Is no special death.

Sorry should aquire this missiles.