The Houthi-Saleh alliance’s forces killed and wounded at least 40 Saudi mercenaries in the country’s southwest in response to Saudi airstrikes in the city of Al Hudaydah. 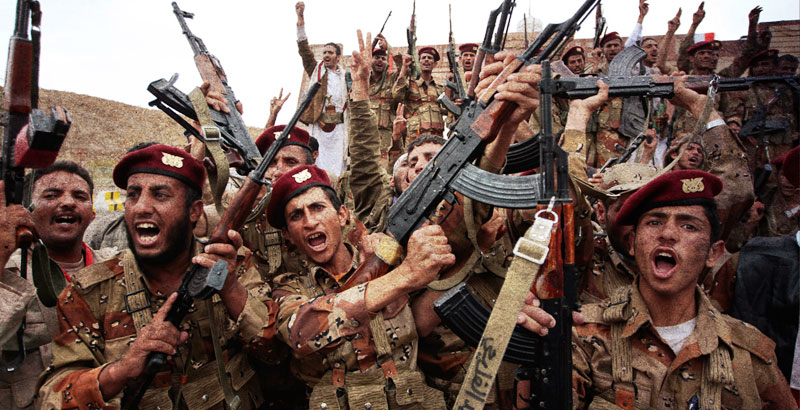 At least 40 Saudi mercenaries were killed or wounded by the Houthi-Saleh alliance’s forces in the country’s southwest. The attack became a response to Saudi air raids that left dozens of civilians dead in the province of Hudaydah.

According to the al-Masirah TV-channel, on Thursday, rockets were launched by the Yemeni Army, backed up by fighters of the Popular Committees, at positions of Saudi mercenaries in Taiz city.

The attacks came a day after Saudi airstrikes killed at least 32 civilians, including women and children, and wounded scores of others at a busy marketplace in the district of Hawak of Hudaydah.

The AP news agency reported, citing a medical official at al-Thawra hospital in Hudaydah, Sami Motair, that “scores of bodies were buried under at least three houses, destroyed by Saudi missiles.” According to Motair, the death toll is expected to rise as a search of bodies is still underway.

On Thursday, the Saudi airstrikes were condemned by UN Secretary-General Ban Ki-moon.

The UN chief “once again reminds all parties to the conflict that they must fully respect their obligations under international humanitarian law, in particular the fundamental rules of distinction, proportionality and precaution,” his spokesman said.

The Saudi raid also was condemned by the Iranian government, according to which, “the West is a complicit of Saudi crimes by remaining silent.”

However, right after the bombing of Al Hudaydah, the US Senate has acted very significantly, refusing to limit the supply of weapons to Saudi Arabia. US senators have voted against a resolution, calling for a blocking of the deal, according to which Saudi Arabia should receive arms worth about $1.15 billion.

The real problem that America is too blind to see , is Saudi Arabia , not Iran . It is more than just greed for money , as in arms sales , the failure to see the Wahhabi mock “religion” , is the largest threat to the world and our survival , not just the people of Yemen , or Iraq or Syria . Saudi Arabia has been exporting this “religion” , from the eighty’s to all Islamic nations via schools that turn normal children into “martyrs” , not only willing to die themselves , but willing to take all of us with them. This false belief must be extinguished .