The war in Yemen has spilled over into Saudi Arabia and continues to drag on. It is no longer confined to the Saudi coalition versus the Houthi alliance but Al Qaeda, target of the drone war, controls almost the entire eastern half of Yemen, including Mukalla, the capital of Hadramout province. Initially, the Saudi coalition included AQAP against the Houthi alliance but some fighters have joined IS/Daesh, (typically) targeting all sides and this complicates a negotiated settlement.

The war has restored the popularity of Saleh, one of the main players in the Houthi alliance, whereas Hadi is resisting talks. His popularity is waning and talks may end his political aspirations. This is posing a serious challenge to the Saudi coalition, explaining their all-out pursuit of victory.

The past week saw a major change in strategy in that the Houthi alliance are now holding territory and military bases and have also surrounded towns and villages in southwestern Saudi provinces. Earlier, they withdrew after such attacks.

The Houthi alliance continues to score significant gains in its response to Saudi Arabia’s invasion of the country. The Saudi coalition casualties are near 2,000 dead and 5,000 wounded. It also lost 450 tanks, 4 helicopters and 15 other aircraft. As much as 7 navy ships were also sunk and damages are estimated to almost 200 billion Saudi riyals.

Even if 10% of this is true, it shows that the Saudi-led coalition just can’t defeat its opponents in Yemen.

Saudi Arabia launched a huge PR campaign, including pro-Saudi think tanks inside Washington, to help cover its failings in Yemen.

ISIS released a series of execution videos showing Houthi alliance fighters, battling both the government and AQAP, been executed in different sickening scenarios in a desert location. Six fighters were blown up by a rocket launcher, another six were sent out to sea and the boat exploded, four were obliterated by the mortar shells hung around their necks and nine were beheaded with sharp knives.

Al Qaeda’s branch in Yemen put a bounty on the head of a pro-government force in the south as it seeks to impose itself as the dominant force in the conflict.

The Penal Court in the capital Sana’a has indicted seven fugitive co-defendants, including fugitive President Hadi, for their participation in the aggression against the Yemeni people and the destruction of its infrastructure. The next hearing is scheduled for December 12, 2015. 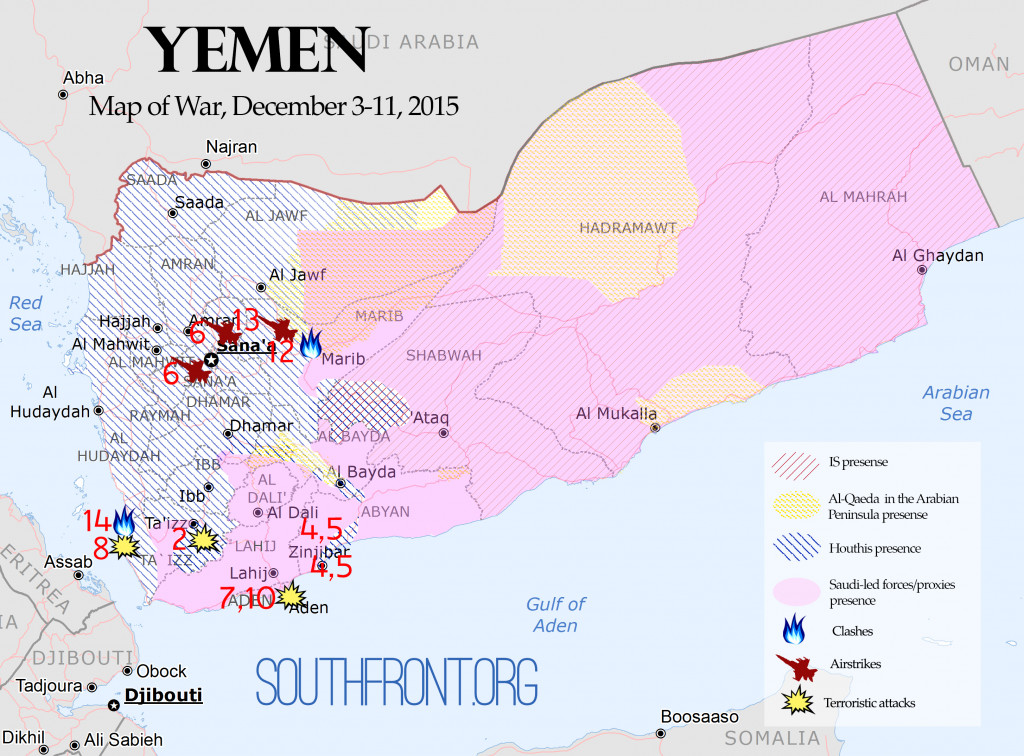 The Coordination Authority for Children’s Rights NGO in Yemen has condemned the continuation of the Saudi-led aggression and the air, land and sea blockade on Yemen. It called on the international community and the UN Security Council to interfere to stop the aggression and prevent more civilian casualties as well as lifting the blockade and allowing relief and humanitarian needs access to the affected areas all over the country. This authority represents 45 civil organizations working in Yemen and concerned on children rights.

Peace talks will convene on December 15 aimed at ending eight months war in Yemen. Previous U.N.-mediated negotiations to end the conflict failed as battles rage across the country.

The Houthi alliance represenatives said the alliance will not attend the peace talks in Switzerland unless Saudi Arabia stops its assault. They added that the UN is unable to end Saudi aggression against Yemen.

In a Press TV interview, an activist and political commentator in Sana’a said that the reason for the start this war is that Saudi Arabia and its coalition, with the United States, UK and France realized that the Houthi alliance consisting of the Houthi, Ansarullah, the bulk of the Yemeni and popular committees have cleared many areas in the south like Abyan, Shabwah, Lahij and Aden from al-Qaeda members.

The Saudi coalition and their supporters have never targeted any members of al-Qaeda and facilitated their free movement in the east and Hadhramaut in particular. Lately, al-Qaeda seized and now control areas previously under the Houthi alliance’s control and are using weapons and Humvees provided by the United Arab Emirates to attack and target civilians in the south.

Until now there are no attacks from the Saudi coalition against al-Qaeda or IS/Daesh who move freely in large convoys across the south.

Hopefully the Saudi economy will collapse at some point.