Amnesty International condemned the targeting of schools in the provinces of Sana’a, Hajjah, and Hudaydah by the Saudi coalition, saying the schools were struck more than once, suggesting deliberate targeting. No evidence was found that any of the schools was used for military purposes and the damage had disrupted the education of more than 6,500 children. They said that it is “appalling that the US and other allies” (of Riyadh) “have continued to authorize arms transfers” to Saudi Arabia for bombing Yemen.

HRW said Washington had to stop selling bombs to Saudi Arabia while Riyadh was engaged in war on neighboring Yemen as they are well aware of the “indiscriminate air attacks that have killed hundreds of civilians in Yemen since March” and “providing the Saudis with more bombs under these circumstances is a recipe for greater civilian deaths, for which the US will be partially responsible.”

The Campaign Against the Arms Trade (CAAT) said that the UK must stop trading arms and revoke all licenses for arms that are being used in Yemen to prevent further incidents occurred where civilians are killed. By continuing to arm and support the Saudi bombardment the UK is complicit in the destruction there.

The US Defense Department announced that it had approved the sale of smart bombs worth USD 1.29 billion to Saudi Arabia, and that it was committed to supporting the Royal Saudi Air Force in the bombardment of Yemen. The sale included 22,000 smart and general purpose bombs, including 1,000 GBU-10 Paveway II Laser Guided Bombs, and more than 5,000 Joint Direct Attack Munitions kits to turn older bombs into precision-guided weapons using GPS signals. The bombs are in part intended to replenish Saudi inventories that have been depleted by its air operations against the Yemeni civilians.

Iran’s deputy foreign minister for Arab and African Affairs said that the Islamic Republic has repeatedly expressed its disapproval of military action since the outset of crisis in Yemen and will continue its efforts for encouraging genuine and effective Yemeni-Yemeni dialogue.

The UN envoy for Yemen hailed Iran’s role in helping the political settlement of the Yemeni crisis, calling on all sides involved in the conflict to contribute further to finding a solution to deadly conflict in the country.

The Beirut-based al-Akhbar newspaper said that UAE forces are being gradually replaced by recruits from the US-based private military contractor, which now goes by the name, Academi (previously Blackwater). This move has raised objections among some members of the Saudi-led coalition.

A well-known source in the Saudi royal family, disclosed that the government’s large-scale corruption at the highest military ranks has lowered the morale of the kingdom’s officers and soldiers in the war against the revolutionary forces. The invasion of Yemen cost the kingdom over $60 billion and the lives of over 2,000 Saudi soldiers killed in combat.

The Saudi-owned “Arabsat” broadcast network and satellite service provider banned Al-Mayadeen News and Al-Manar News for covering war developments in Yemen and made it clear that they will not tolerate any news coverage of the War if it contrasts their own political agenda.

A Houthi alliance spokesman said that they are advancing deep inside Saudi Arabia and capturing more military bases in the Southern parts of the kingdom and reiterated that their morale is high to fight the enemy and to capture new military bases of Saudi Arabia. 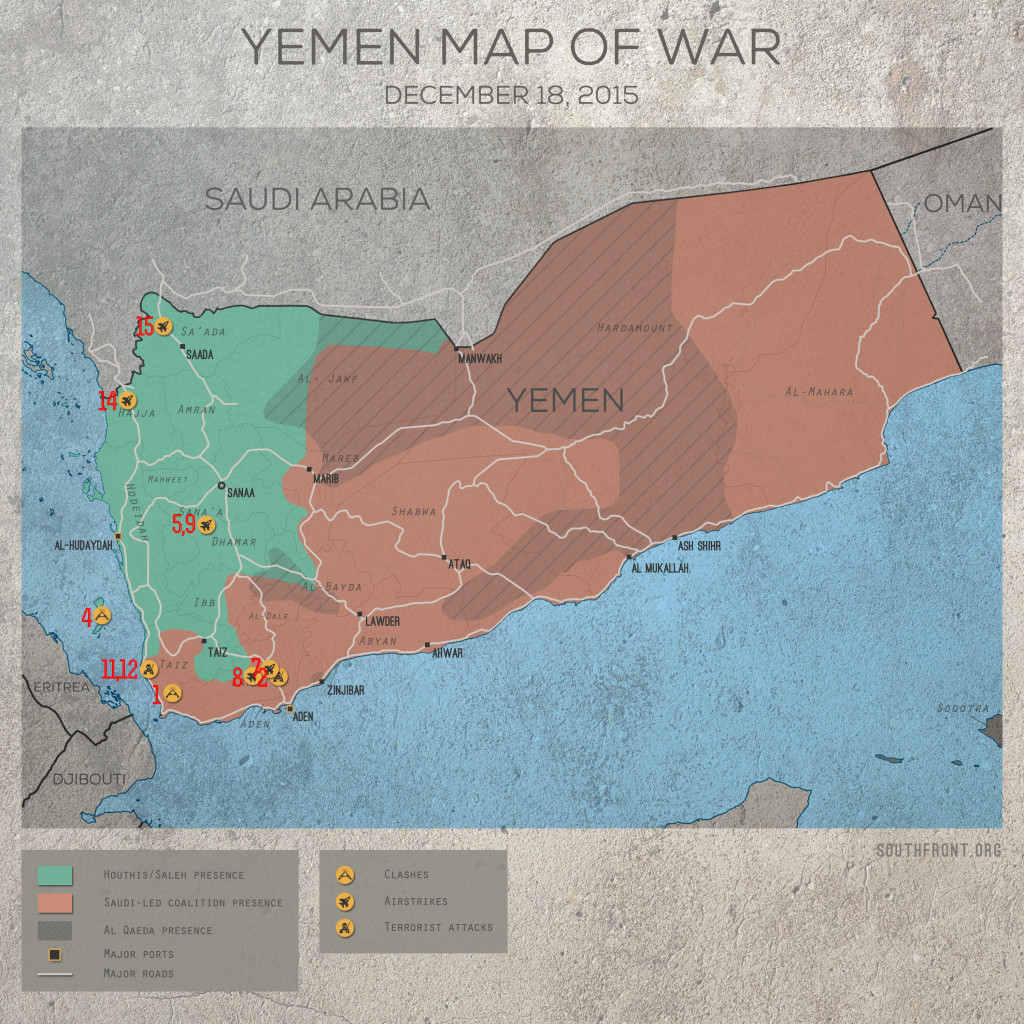 The Houthi alliance said that they have witnessed escalation as the Saudi coalition are violating the UN-backed ceasefire, warning that the Yemenis will not simply stand and watch. Dangerous escalation is taking place through land, sea and air and there are attempts by the Saudi-coalition mercenaries to attack several areas in Ma’rib, while there are also attempts to get into Harad city. Saudi coalition warships are striking al-Hadidah city and mercenaries, backed by warplanes, are also trying advance towards al-Juhmaliyyah. In turn, Saudi Arabia acused the Houthi alliens in violation the UN ceasefire. Indeed, it’s more likely that the both sides just violated it.

Why is it “more likely that both sides violated the UN ceasefire”?

Do they both have to gain on that?

The Saudi Goliaths do, yes.

But the Yemenis, they whos infrastructure, water and food, is destroyed and people need to be digged out of collapsed buildings?