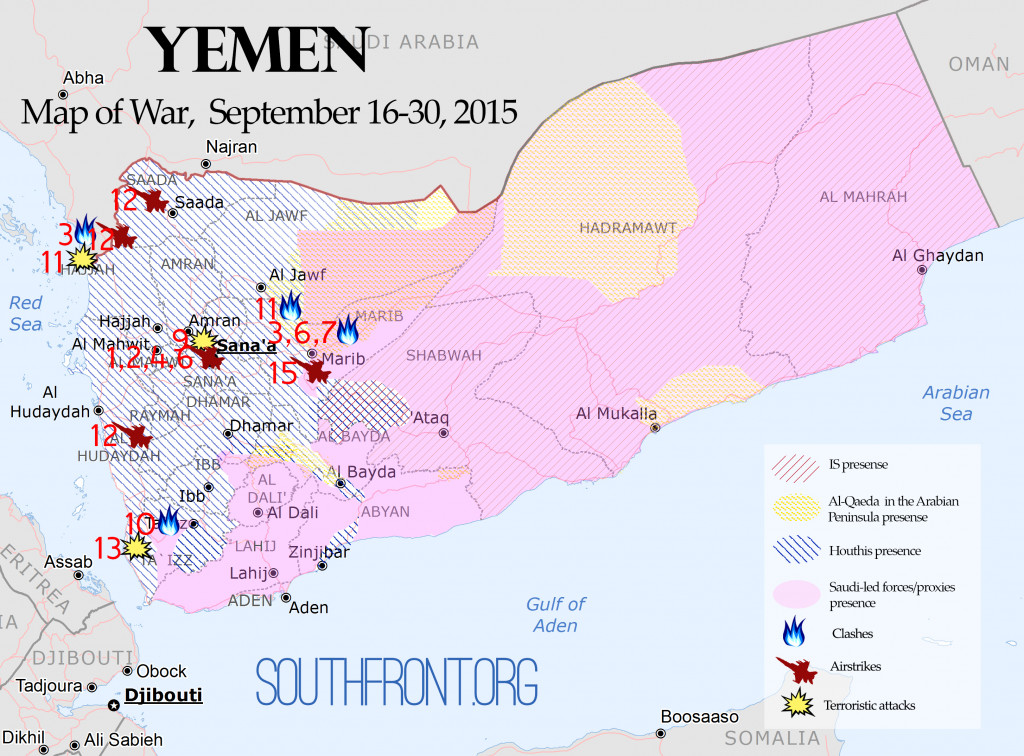 The Saudi-led coalition is still unable to gain a major military success despite waging an intensive bombing campaign on al Houthi supply lines in northern Yemen. The situation on the frontline is stable but tense.Indeed, the ongoing conflict has shown that forces of the Arab coalition aren’t enable to solve the crisis only in military way.

Al Qaeda in the Arabian Peninsula and ISIS continue to expand in Yemen in accordance with the Saudi Arabia-led coalition actions.

The Marib battle is a starting point for the new wave of escalation in Yemen. Saudi-led coalition wasn’t ready for casualities and this fact impacts negatively on the martrial spirit of its forces. So, despite the public statements about the war to the bitter end, Saud Arabia will likely be pushed to start talks with al Houthi representatives again. According to unconfirmed reports, the talks have already started in Oman.

Will we have another drawn-out war of attrition/resistance in Yemen as in Palestine, Somalia, Afghanistan, Iraq, Syria and Libya? In all of these conflicts, sponsors of aggression, in each case, were expecting quick results: a few months at worse?

One lesson that we have failed to learn from history is that we would repeat such mistakes. The definition of insanity (ascribed to Einstein without any evidence) is that one cannot expect different results from doing the same thing over and over.

When will we learn that one cannot enter another man’s house and expect him to just ‘submit’. In every such case in history, resistance had a distinct advantage and the superior might of the military did not count for much. In the few cases where a nation was subdued, such aggressive occupation did not last more than a few decades.

The US backed aggression in Yemen has ground to a halt. Like Lebanon in 2006, the focus is now on destruction: If we cannot have it, we will destroy it (and maybe make something out of reconstruction contracts. One only has to read Naomi Klein’s ‘The Shock Doctrine’ and John Pilger’s “Hidden Agenda’ to know the game plan.

In the short term, this war of aggression will come to an end through international pressure.

Houthis in the South-Western Saudi Provinces, lost during the previous century, will soon join their relations across the border and with a steady supply of weapons – begged, borrowed, bought or stolen – it is not inconceivable that Saudi Arabia, a historic aggressor in Yemen, will turn tail without any real gains as happened before. We must not forget that Yemen briefly occupied Mecca in 1632, and earlier in history even controlled the Arabian Peninsula as far as modern day Riyadh!

Surely, with equivalent external political, military and financial support – now virtually non-existent – the Houthis could turn the tables. The same is true for any of the occupied and destroyed countries in the Middle East, including Palestine.