The US State Department has signed off on the sale of $1.29 billion worth of weaponry to Saudi Arabia, including tens of thousands of bombs that will restock a Saudi arms stockpile depleted by the country’s air campaign in Yemen, which has been linked to civilian deaths.

At the Dubai air show, a General of the US Air Forces Central Command remarked that he is impressed with the GCC nations and every nation in the (Saudi) coalition. Secretary James also said that the US is making progress in defeating militant group Daesh in Syria and Iraq. Are these people ignorant of the fact that the Saudi coalition includes Al-Qaida and IS (Daish) forces in Yemen? Surely not!

The arrival of reinforcements from Eritrea and Sudan (with dismal human rights records) has the potential to plunge Yemen even deeper into chaos and may put the United States in an extremely awkward position, as it has repeatedly criticized these countries for committing atrocities.

But as the conflict drags on, mounting civilian casualties, a worsening humanitarian crisis and massive destruction of infrastructure, have drawn criticism from international rights groups and lawmakers in the United States. More than 5,400 people have been killed since the intervention began, and UN officials warn of famine.

The EU urged the Government of Yemen to assume its responsibility in the fight against extremist and terrorist groups, such as Al Qaida and Da’ish in Yemen, which are taking advantage of the current instability. They condemned all terrorist attacks in the strongest terms, in particular those against civilian and religious targets. They are also extremely concerned about the use of cluster munitions and the disruption of essential services on the civilian population and the damage to civilian infrastructure and cultural heritage.

British Foreign Secretary called for an investigation into whether the use of British weapons sold to Saudi Arabia had violated international law.

In a letter to President Obama, 13 congressmen called on the administration to work with their allies in the Saudi collation to protect civilians to reduce possible backlash against the U.S. U.S. intelligence officials have also expressed concern that the conflict has strengthened Yemen’s Al Qaeda affiliate.

Ex-President Hadi said there will be no negotiations with the Houthi alliance and that peace talks in Geneva will only be a discussion about how to implement UN Security Council Resolution 2216.

Meanwhile, the Houthi alliance spokesman said that the Hadi presidency is over since the period set by the Gulf initiative had ended, was extended and then Hadi himself resigned. He also stressed that the Houthi alliance consisting of the Yemeni army and the popular committees loyal to Ansarullah revolutionaries are untouchable because they are defending the country against the Takfiri threat represented by al-Qaeda and ISIL, sponsored by the Saudi coalition.

The UN has described the humanitarian situation in Yemen as catastrophic with more than 80 percent of Yemen’s 25 million people in dire need of aid.

The Saudi military is trapped in a protracted and devastating conflict that is straining relations with its allies. It is hobbled by divisions and unable to find a face-saving way to exit the costly conflict.

It is unclear how Saudi Arabia can end its military involvement without coming off as the loser. A ground assault to wrest Sana’a and northern areas from rebel control could produce many casualties. UN-backed peace efforts, moreover, have repeatedly failed while the Houthi alliance is escalating the fight by launching cross-border attacks into southern Saudi Arabia.

“This war is draining the Saudis militarily, politically, strategically,” the Washington Post quoted a Yemen analyst, saying. “The problem is they’re stuck there.”

An expert on Persian Gulf countries said: “As far as Iran is concerned, this war demonstrates that Saudi Arabia just isn’t as formidable a counterweight as many people had thought!” 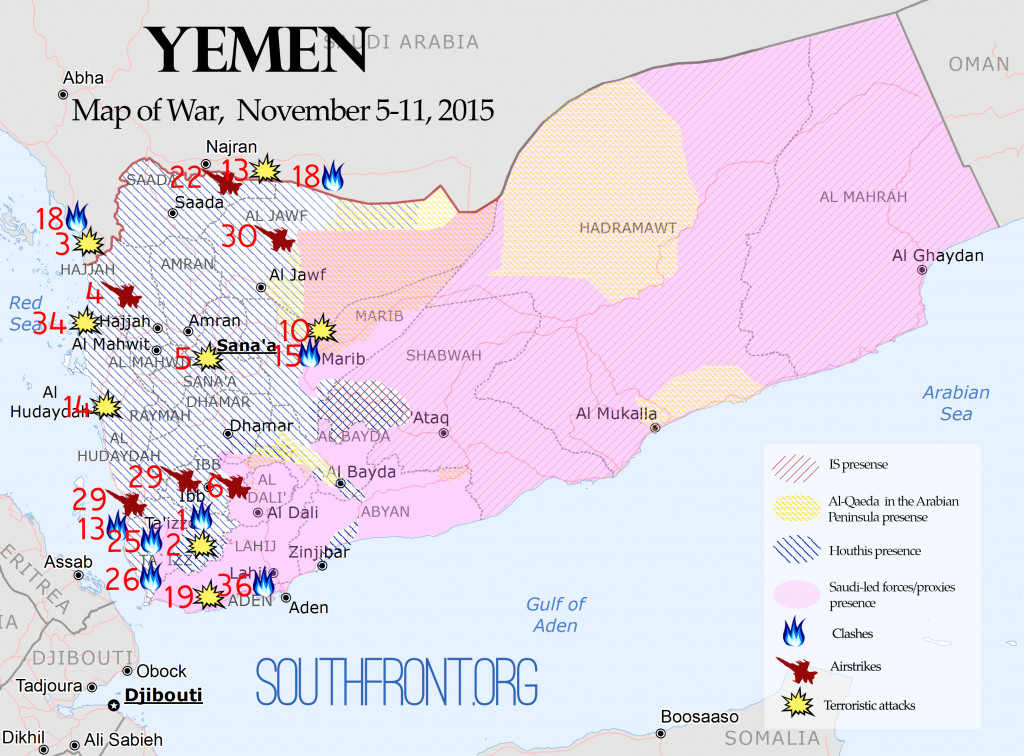 Eight months after launching a war in Yemen, the Kingdom appears trapped in a protracted and devastating conflict that is straining relations with its allies, intensifying internal power struggles and emboldening its regional rival, Iran!

To add insult to injury, Al-Qaida and IS/Daish terrorists, who went unnoticed in the past, are now audaciously driving their armed vehicles around the city of Aden, passing army checkpoints spurred authorities to clamp down on arms ownership. In the streets of Aden, people have many reasons to be skeptical about the government’s plans and ability to restore peace to the battered city. Their plan includes a week-long awareness campaign to convince people to keep their guns at home, the setting up of more checkpoints, absorbing local militiamen who fought the Houthis into the army and raiding rebels’ hiding places in the city. The United Arab Emirates, which has a strong military presence in the area, will fund the plan.

Aden has been racked by armed clashes, explosions, and assassinations since the Houthi alliance was pushed out of the city in July, despite the deployment of thousands of pro-government forces.

Tags:saudi arabia, the us, yemen