The British-made missile used by the Saudi coalition to destroy a Yemeni ceramics factory producing only civilian goods in September was a violation of international humanitarian law and the laws of war and demands a ‘proper investigation’. This incident shows UK policy to be misleading and ineffective and the UK should suspend all sales of aerial munitions to the Saudi coalition members, according to HRW. The UK may also be in violation of the Arms Trade Treaty (ATT) regulating the international trade in conventional weapons. The US is still providing targeting intelligence as well as refueling aircraft and other logistical support.

HRW has slammed Saudi Arabia’s targeting of civilians in Yemen, saying the kingdom and its supporters in the West failed to provide answers over the killing of civilians in the impoverished country. They stated that the attacks against the civilians had been ‘deliberate and indiscriminate’ in areas under the control of the Houthi alliance, including Sana’a, Amran, Hajjah, Hodaydah and Ibb.

Mounting evidence suggests that UK-made missiles, sold to the Saudi Arabia, were used against civilian targets in Yemen, UK Foreign Office lawyers and diplomats have warned.

Amnesty and other NGOs, including HRW say that UK and US munitions are being used in the Saudi-coalition bombing campaign and that Britain is at risk of being charged with war crimes.

The humanitarian situation in Yemen is deteriorating ever since the Saudi coalition’s aggression commenced. Several refugee camps have been set up in the suburbs of Sana’a, for the people who have fled indiscriminate bombardment.

The blockade of Yemeni ports, the sealing of borders by Saudi security forces, and the humanitarian suffering of civilians are fueling the growth of already entrenched extremist movements and have allowed Al Qaeda to capture territory in Yemen, including a military base and a port.

The UN accused the Houthi alliance of blocking the delivery of humanitarian supplies for 200,000 residents besieged in Ta’izz.

UNICEF reported that more than 600 Yemeni children were killed since the March’15 and that more than 20 million Yemenis are in need of urgent humanitarian aid, including clean water, sanitation, and basic healthcare.
The Austrian Foreign Minister openly criticized Saudi Arabia over its dismal human rights records and its promotion of the Wahabbi ideology.

Iran’s Deputy Foreign Minister for Arab and African Affairs said that those supporting the war against Yemen should know that Riyadh will not win the conflict and that “only the resistant Yemeni nation will finally emerge victorious.” He also warned against increasing terrorist attacks by al-Qaeda-linked militants operating in Yemen.

The liberation of Ta’izz could represent the real beginning of an end to this tragic war but the topography of Ta’izz has halted the advance of the Saudi coalition towards the city. Landmines were also planted by the Houthi alliances around Ta’izz and this has delayed and complicated the liberation of the city.

The UAE has secretly dispatched hundreds of Colombian mercenaries to Yemen. This foreign army was quietly built in the desert over the past five years, initially trained by Blackwater. The arrival of 450 troops – some even from Panama, Salvador and Chili – adds to the diversity of government armies, armed tribes, terrorist networks and Yemeni militias currently.

A Houthi alliance spokesman said that the army and popular forces are advancing deep inside Saudi Arabia and capturing more military bases in the Southern parts of the kingdom. He added: “The Yemeni forces have managed to inflict heavy losses on the Saudi enemy inside Saudi Arabia.” 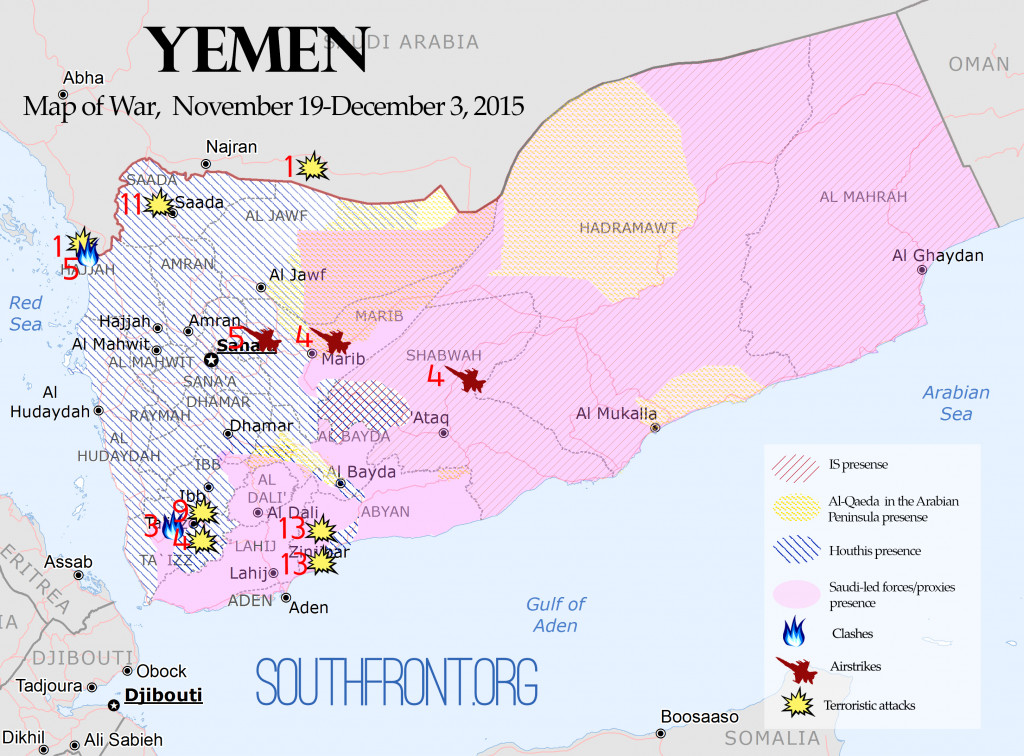 Many say the Saudis are gradually realizing that they underestimated the Yemeni forces’ capability in defending their territory.
With al-Qaeda gains in the east, Houthi alliance gains in south-western Saudi Arabia and the Saudi coalition caught up in quagmire in the approaches to Ta’izz in a hope of taking Sana’a, the only hope for Yemen is a negotiated settlement.