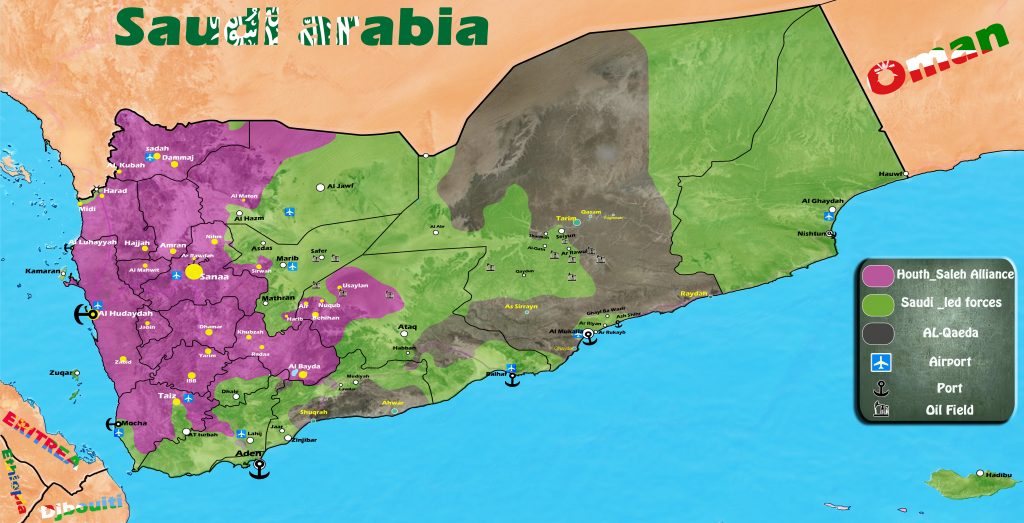 The war in Yemen enters its third year with little possibility of a military or political solution. The country is at risk of a grave humanitarian crisis due to widespread diseases and the destruction of infrastructure by Saudi-led coalition airstrikes.

After several attempts to solve the conflict, whether in Geneva or Kuwait, all political efforts failed to solve the conflict. Military solutions are also hardly possible due to the geographic nature of the country and a poor training of military personnel involved in the conflict from the Saudi-led coalition side. In turn, Houthi forces and their allies also lack supplies and weapons to deliver a devastating blow to the Saudi coalition.

The Arab coalition opted an approach aimed at controlling the strategic areas of Yemen. The coalition gained the southern coast, the coastal city Aden, captured Marib, launched a military operation against Houthi forces in the city of Taiz and took control of the Mandeb Strait , but the strategic western coast remained under Houthi-Saleh control.

In January 2017, the Saudi-led coalition launched “Operation Golden Arrow” aiming at controlling the entire western Yemeni coast and the coastal city of Al Hudaydah that overlooks the Red Sea. If the coalition captures Al Hudaydah:

The side that controls the area can easily impact the navigation in the Mandeb Strait. About 12% of the international trade passes through this strategic region.

Controlling the Western Yemeni coast is a priority for the UAE. The western coast of the UAE gains a foothold on both sides of the Mandeb Strait. It is worth mentioning that the UAE have a military base in the Somaliland coastal city of Berbera.

Scenarios of the Operation to Capture Al Hudaydah City

The second and third scenarios will be supported by the Saudi-led coalition naval power which consists of:

Elements of the Egyptian navy:

After the recent Arab Islamic-American summit in Riyadh, and Trump’s direct accusation that Iran is responsible for terrorism and instability, it becomes clear that the United States want to establish a Sunni Arab alliance to counter the increasing Iranian influence in the region.

Trump is a clever salesman – he managed to fulfill his previous promise to make Gulf countries pay for their protection and he managed to make the largest arms deal in the history of the US.

The capture of the Al Hudaydah port would be a great PR victory for the Gulf countries and their American allies. However, a low morale and a poor training of pro-Saudi forces as well as large differences among the Arab coalition member states are key problems preventing the Saudi-led block from launching an advance in this strategic area in the nearest future.

Furthermore, the recently erupted Qatari crisis in the Middle East will further slow down any Saudi-led attempts to capture Al Hudaydah.

Kill the invading Terrorist motherfuckers all..!!

A good analysis. Political solution is the only viable option.After 3 years of Saudi-led coalition ,the Houthy backed forces have not collapsed.The price wanted by Houthies and Saleh is high as they do not accept the setbacks. Solution.: Many scenarios. The South and North pre -union Yemens should attempt a Confederation of two states. The North will not accept the South to separate for economic advantage of oil etc. The leadership in both are corrupt and incompetent. The outlook of end of War is getting harder and the suffering of the population due to Cholera , breakdown of infrastructure and increase gains from various terrorist groups makes it even worse . DR GHAFOOR S