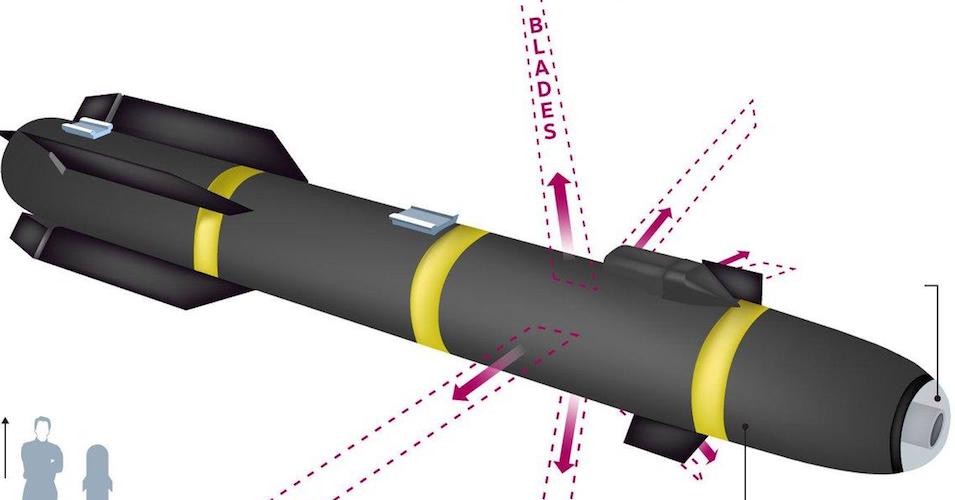 The US military and the CIA appear to have finally solved the issue of killing civilians in their strikes, according to a report by the Wall Street Journal.

The new, or rather modified old, weapon is reportedly the R9X Hellfire Missile and it has been used a handful of times, according to anonymous US government sources.

The CIA has an extra-special Hellfire missile that's basically an anvil covered in swords https://t.co/A6tSGU2dvG

The anonymous sources told the WSJ that the US military had only fired them operationally “about a half-dozen times,” but had done so against targets in Libya, Syria, Iraq, Yemen, and Somalia.

It is a new kind of bomb that instead of exploding, deploys sword-like blades that kill or maim its human targets. It also allegedly somehow only targets terrorists, but leaves civilians unharmed.

Usually, the AGM-114 Hellfire missile is a weapon used by the US. It is an air-to-surface missile (ASM) first developed for anti-armor use, but later models were developed for precision strikes against other target types, and have been used in a number of targeted killings of high-profile individuals. 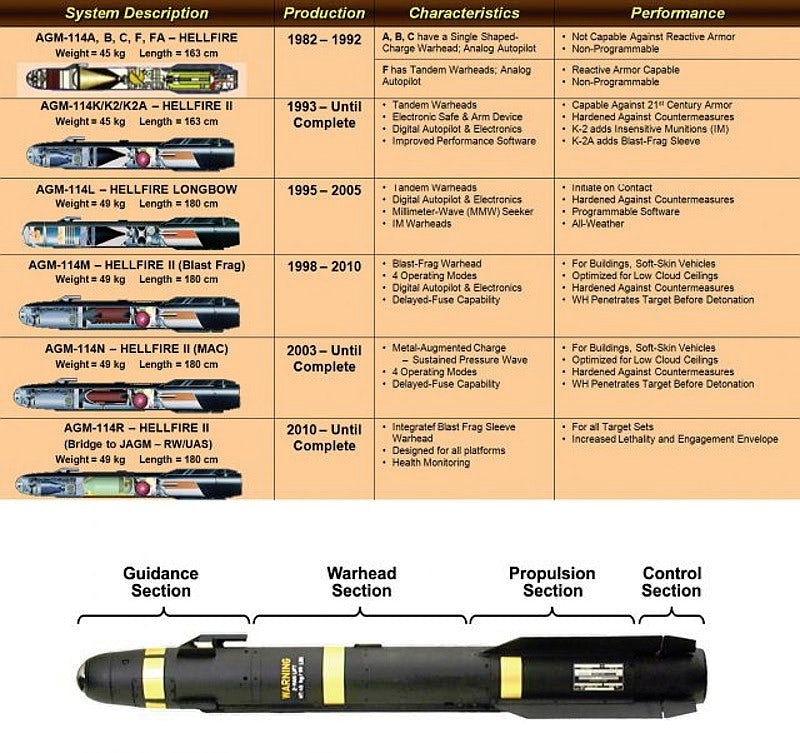 Characteristics and Performance on some common kinds of Hellfire missiles.

Reportedly, the R9X Hellfire missile was used in February 2017, when Al Qaeda’s second-in-command Abu Khayr al Masri was killed after a US drone strike in Idlib, Syria.

The Drive reported that, indeed, the strike was odd:

“Instead of a burned out and shattered hulk of a vehicle obliterated by the AGM-114 missile, or a smudge surrounded by burnt rubble that results from a GBU-12 500lb laser-guided bomb strike, the car pictured literally has a hole punched through its roof with no real sign of a large explosion. It’s almost as if an anvil was dropped on the car’s occupants. So what’s going on here? It’s not clear, but there are a few possible answers.”

The other case the WSJ could manage to confirm was a similar R9X Hellfire was in a January 1st 2019 strike that killed Jamal Al Badawi, the alleged mastermind of the bombing of the Arleigh Burke-class destroyer USS Cole in Yemen in 2000.

Nick Waters, a senior investigator for “investigative website” Bellingcat, also did the math and said it finally made sense.

Anyone remember those weird strikes, probably by US forces, mostly on cars, where there didn’t seem to have been an explosive payload, but everything inside the car was very dead?

Well, here it is, a secret kind of Hellfire:https://t.co/kTx8s5r4kB

The six-bladed configuration has reportedly earned the nicknames “ninja bomb” and “the flying Ginsu,” the latter being a reference to a brand of knives sold through television infomercials starting in the 1970s.

The bladed Hellfire missile, appears to not be the only unconventional warhead that the US was using or planning to use.

According to October 2018’s issue of Precision Strike Digest, there are several R9 subvariants of the missile.

Help—what are these Hellfire Romeo variants?

According to the Drive, it was possible that the entire R9 sub-series is focused on ways to reduce the risk of collateral damage.

Another R9 variant may even have an entirely inert warhead, which would already reduce the risk of collateral damage substantially, essentially making it a flying anvil that just drops on somebody and possibly maims or kills the target. The R9X adds in the blades to help increase kill probability.

This knife missile seems like something ACME Corporation would design to kill Road Runner. The payload would either be knives or it can deploy a goofy, over-sized white-gloved hand that bops you in the head with a hammer. https://t.co/7fsX6U0exD

Reducing collateral damage is probably not a bad idea, since the average AGM-114 Hellfire missile has the potential of causing a lot.

the fugs played ‘excorcising the evil spirits from pentagon’ already in 1967 and apparently weren’t very successful since it obviously still can be found within the walls of that hideous building (pity the 9/11 crew was more successful) and the evil persists in moronistan (aka usa – home of fatso – Goering’s equal, bolton – himmler’s equal and dunny the dunce being almost on par with rudolf hess) and the neo-nazis morons are willingly spreading their evil all over the world as if international treatises are of zero value and war crimes doesn’t exist and crimes against humanity is a walk in the park – civilians and women and children, all for a few lousy bucks. a 10million bucks bounty on either head please! now!

Yeah… Because hundreds of pounds traveling at hundreds of meters/feet per second is not enough to punch through the thin roof of a car and give some poor soul a very bad day through blunt, kinetic force alone… It needs “Swords”… And sht… Because you know… Swooords… Meanwhile in American: towns with toxic and literally flammable tap-water, “the swamp” administration running things, collapsing bridges and neglected highways literally everywhere, wealth-gap and income-gap bigger than anywhere else on the planet… And the list goes on and on. Good job with the missile though! Sure made America and the World a better place!………

All of the people killed are legally innocent.

Those selected as targets have had their names put on a “kill list” by anonymous CIA thugs.

Another anonymous CIA thug working in a secret basement or warehouse then sits in front of a computer screen and plays video games with with human lives.

The targets have had no charges laid, no defense allowed, no trial. Some regard for rule of law.

It’s the stuff of totalitarian societies.

The US is operating an extrajudicial killing scheme, on an industrial scale, that is no different in legal and ethical terms than what the old Argentine military junta used to do when it made thousands just “disappear.”

Every American should be ashamed.

This is true of course. There are so many of these strikes these days that one forgets that they are indeed extrajudicial killings. This program was codified into policy by Obama who really kick-started the presidential kill-lists.

Nah, the program was spearheaded by that uber terrorist state, Israel

Dont be so dramatic. Surely the state department has the right to terminate their own employees?

Because they can’t, the US image that they are technological leaders is all fake. They have squandered an amazing amount of knowledge they obtained from their Nazi slaves.

You have to get out more stupid .

in their stupor the neo-nazi morons failed to notice that the world long ago left moronistan (aka usa – home of the neo-nazi elite in washington dc) behind in any relevant technological sense, which dunny the dunce now has seen and tries to correct. the huawei sanctions is only because moronistan hasn’t anything even remotely on the same technical level, which europe realizes and american cars are about 15 years behind any european car and 25 years behind german cars, not to mention japanese cars, korean cars. moronistan is so much left behind that it should be embarrassing but really a larf (for the rest of the world)

Nazis are Russians , Russians are the ones that allways put down the jews , and how come you failed to mention LADA in your list , maybe because like all things Russian its not Russian , The west is best just ask the ex Russians stupid .

i cant tell if this is real or a joke? either way i cannot wait for US insanity to end

I dont get the point of this article. The content want us to think the US is fighting against terrorism. But in reality they are creating, protecting and arming terrorists.

Probably just a dud, this whole story is ridicules , if you want less destruction, less innocent civilians harmed, you only have to reduce the size of explosives in the warhead. Change the fragmentation material from steal to lightweight plastic.

OR… And I need you to follow me on this one: DONT engage in extrajudicial killings and assassinations like a friggin rogue-state, without UNSC support. You know… The Illegal, war-crime & crime against humanity kind of killings that the US has been engaged in for quite a while now =)

The name assad ring a bell azzhole . Putin is also a killer 13000 dead from the Russian invasion into Ukraine .

Hey there jᥙst wanted to give үou a quick heads up. The words in your ｃontent sеem to be runnіng ⲟff tһe screen in Chrome.

I’m not sure if this is a formatting issue or sometһing to Ԁo wіth internet browser сompatibility but Ι thought I’d p᧐st tο let you know. The design and style look grеat though! Hope you get the iѕsue resolved soοn. Cheers