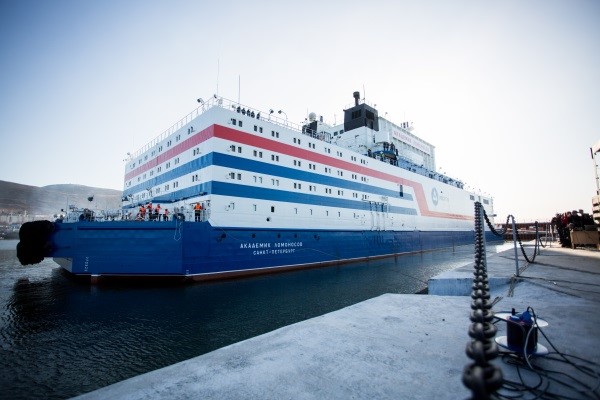 Officials of Russia’s State Atomic Energy Corporation, Rosatom, announced on 22 May that the Akademik Lomonosov floating nuclear power plant (FNPP), the world’s first, has entered into full production phase. The Akademik Lomonosov FNPP reached the port city of Pevek in Russia’s Chukotka Autonomous Region (in the Far East of the country) on 14 September last year after covering a distance of more than 4,700km from Murmansk.

The FNPP started providing electricity to the isolated grid of the Chaun-Bilibino energy center of Chukotka on 19 December 2019. The US POWER magazine identified this event as one of the six most significant global nuclear energy industry developments of 2019.

The FNPP has already generated over 47.3 million kWh of electricity since being connected to the grid. Currently, it covers 20% of the Chaun-Bilibino region’s electricity demand. The FNPP will become the main energy source for Chukotka following the shutdown of the Bilibino nuclear power plant, scheduled to occur during 2020.

The Akademik Lomonosov is the first of a series of low-power mobile power units. The floating nuclear power plants (FNPPs) are a new class of energy sources based on Russian nuclear shipbuilding technologies, likely to be deployed in the initial phases to Russia’s remote far north and far east regions. The FNPP is equipped with two KLT-40S icebreaker-type reactors which are capable of generating up to 70 MW of electricity and 50 Gcal/h of thermal energy in the nominal operating mode. This is enough to meet the energy consumption demands of a city with a population of about 100 000 people.

The Akademik Lomonosov has a length of 144 meters and a width of 30 meters. It has a displacement of 21 500 tones and a crew of 69 people. The reactors were designed by OKBM Afrikantov and assembled by Nizhniy Novgorod Research and Development Institute Atomenergoproekt. The reactor vessels were produced by Izhorskiye Zavody. The turbo generators were supplied by the Kaluga Turbine Plant. The FNPP’s planned service life is 40 years.

Russia’s Energy giant, Gazprom, reportedly has plans to use at least 5 FNPPs for oil and gas field development as well as for support of infrastructure for transportation operations. Possible locations where they could be used include the Shtokman natural gas field in the Barents Sea, and in the developing oil and gas fields on the Yamal Peninsula. According to Rosatom, 15 countries, including China, Indonesia, Malaysia, Algeria, Namibia, Cape Verde and Argentina, have shown interest in leasing floating nuclear power plants…