A photo, showing a shoulder-mounted anti-drone gun, used during the security exercises ahead of the World Economic Forum in Davos, has been published online. 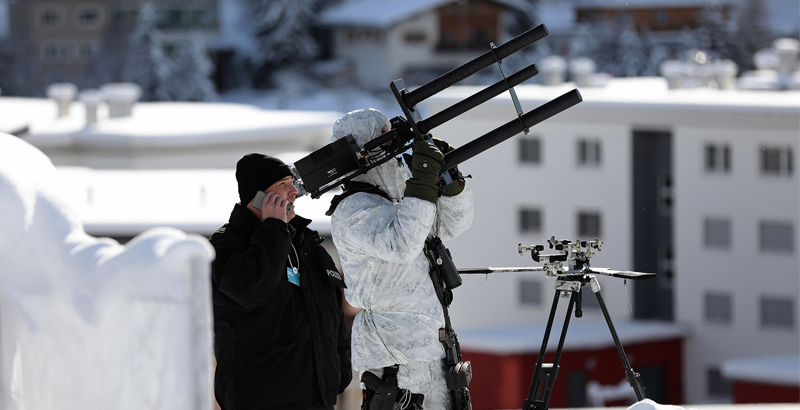 A member of a police unit practices using an anti-drone gun as part of the security exercises ahead of the World Economic Forum (Photo: Bloomberg / Simon Dawson)

The Bloomberg news agency published a photo, showing a new type of weapon – a shoulder-mounted anti-drone gun, used by a member of a police unit as part of the security exercises ahead of the World Economic Forum in Davos. The photo lets us to understand that with the emergence of a new ‘enemy’, an unmanned aerial vehicle (UAV), a new weapon to tackle it has also appeared.

Earlier, the DroneShield company introduced its own anti-drone gun, the so-called DroneGun, which is capable to jam drone signals, including GPS and GLONASS positioning, from a distance up to 1.2 miles away (about 1.6 km). Like the most part of its rivals, the DroneGun doesn’t destroy an UAV, but forces it to land or return to its starting point. The weapon weighs 13 pounds (about 6 kg), but it is enough portable to be usable by one person. Any technical training is not needed for the usage of the DroneGun, so, it’s easy for security staff to use. However, the DroneGun is not FCC-certified and this means that you cannot legally operate it in the US unless you are with the government.

Though, now, there are several models of various anti-drone guns, all of them have one big weak point – a person, who uses such a weapon, needs to be relatively close to the drone, which could be scary if the robotic aircraft is carrying explosives.