Some experts believe that the US is getting close to Russian efforts to fight ISIL in Syria. However, the relations remain cold. 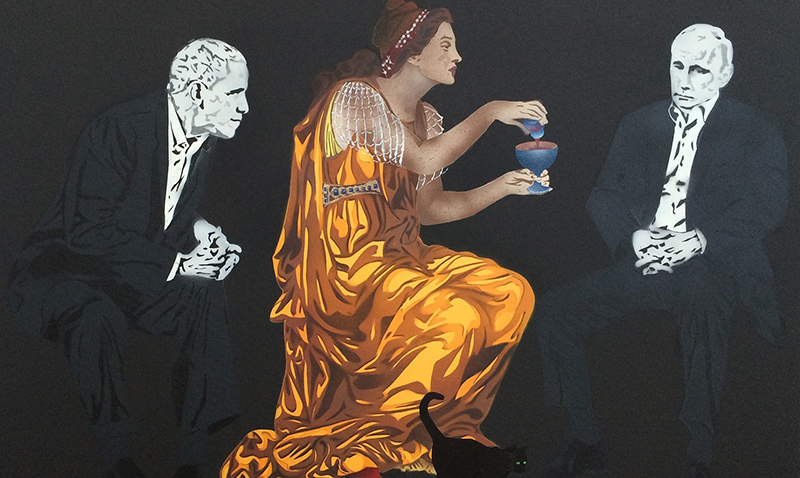 On November the 30th, Vladimir Putin and his American counterpart Barack Obama held a non-programmed 30-minutes briefing in the sidelines of the COP21 (Paris climate conference). It’s reported that the main subjects discussed by both leaders were: the settlement of the ongoing situation in Syria and Eastern Ukraine conflict.

Both Putin and Obama agreed that a political settlement must be carried out in war-torn Syria whose problematic was discussed in detail.

Putin considers a new constitution is needed in Syria for this purpose, along with new election and monitoring of the results. Dmitry Peskov, the Kremlin spokesman, said it’s too early to think that a single coalition to fight extremism in Syria could be reached.

In regards to Ukrainian conflict, the immediate need of implementing the Minsk agreements was discussed by both presidents. It must be taken into consideration that situation in DPR and LPR is far from being solved, on the contrary it has worsened dramatically with the continuous violation of Ukrainian Forces to the agreements made in Belarus and a humanitarian situation deteriorating every time more.

Also Obama expressed his regret about the downing of the Su-24M bomber. Curious fact after having declared the day the incident occurred (November 24th) that Turkey had its right to defend itself.

However, it seems like Americans are getting close to Russian efforts to fight ISIL in Syria, that’s why, the Defense Ministry’s press service said on Monday that on the initiative of the American side, a telephone conversation took place between the Chief of Russian General Staff, First Deputy Defense Minister Army General Valery Gerasimov and Chairman of US Joint Chiefs of Staff Joseph Dunford, to discuss the fight against the Islamic State (IS) terrorist group in Syria.  As it was reported, both parts discussed the current participation of the US and the international coalition commanded by them and Russian offensive as well. An agreement on continuing bilateral relations was reached.

Russia has increased its deployment of forces to fight IE in Syria from over 50 aircraft and helicopters, including Sukhoi Su-24M, Su-25SM and state-of-the-art Su-34 aircraft to 69 aircraft taking part in the offensive and involved strategic bombers in strikes against the extremists who now control about 50% of Syrian territory and a 40% of Iraqi as reported.

But US commitment doesn’t seem to be completely real though, since they’ve been avoiding to target the trucks that smuggle oil from ISIL-seized territories to Turkey mainly due to considering them civilian targets as Mowaffak al-Rubaie, Iraqi official and member of the State of Law Coalition party in the Iraqi parliament and former national security adviser, said.

US deliberate avoiding of bombing strategic targets of the jihadist group shouldn’t be overlooked, since the main source of incomes of the extremists is oil output and trade in the black market whose revenues in the last eight months ascend to about $800 million.

Nevertheless, US government is implementing a series of measures to fight the expansion of terrorism outside the frontline in the Middle East by sending special groups known as “Foreign Fighter Surge Teams” abroad as an effort to prevent terrorists from traveling from areas and countries “which are prone to creating and exporting terrorist groups”, as the White House has said. But this is not the only change in US’ policy regarding the struggle against terrorism as it was announced by the Pentagon by finally admitting that “advisers” previously deployed in Syria will actually be involved in military operations regarding the rescue of hostages, conduct raids, capture ISIL members (leaders) and gather intelligence information as well as inferred by US Defense Secretary Ashton Carter on Tuesday, December 1st.

Such change of strategy clearly recalls the events on Vietnam under Kennedy’s administration which aftermaths were disastrous. Instead, Americans should perhaps be aware of the growing threat in their own territory where the number of sympathizers of the terrorist group ascends to almost a thousand.

Also, in the frame of the consequences that the downing of the Su-24M bomber brought, Russia has disclosed the allegation that the attack has been politically covered by NATO. As expected, the US have also warned Russia against arming its warplanes with air-to-air missiles as announced by the Pentagon spokesperson Michelle Baldanza on December 1st alleging that on the fight against ISIL, such weaponry is not needed as the terrorists have no air forces. In response, the Russian Aerospace Forces Colonel Igor Klimov said that the planes are equipped with such missiles to guarantee their defense.

Russias’s disclosure of evidence that shows Turkish involvement in oil trade with ISIS has been qualified as untrue and absurd by the Pentagon as praising the partnership with Turkey for their participation in the operations against the jihadists. It must be said that on Monday, US Defense Secretary Ash Carter was telling the House Armed Services Committee that most of Turkey’s military operations were directed against the Kurds, rather than the self-proclaimed Islamic State. Curiously.

Lately in the second day of Foreign Affairs meeting at the NATO headquarters in Brussels on December 2nd, John Kerry, the US Secretary of State acclaimed Russian offensive in Syria, but it’s absolutely clear that the declaration given by the US official during a press conference means exactly the opposite.  It’s widely known the real interest of Americans to fight the legitimate government of Assad among other reasons, not only political ones, but also economic.

Once again it’s clear that beyond a real commitment of solving ongoing conflicts worldwide, interests and profits are the main motivation for some of the world’s major powers.