The Syrian Arab Army (SAA), local fighters, and former fighters of the Free Syrian Army (FSA) are preparing to launch a new offensive against the remaining ISIS fighters in the heavily fortified area of al-Safa north of the governorate of al-Suwayda, the al-Suwayda 24 blog reported on October 11.

According to the Syria-based blog, Russian forces in Syria will support the upcoming offensive by providing ammunition, reconnaissance and close air support. Furthermore, around 150 locals from al-Safa will be guiding SAA troops through the rough area.

Last August, the SAA launched a military operation to neutralize ISIS cells north of al-Suwayda and to free around 30 civilian hostages, who were abducted by the terrorist group during the July 25 attack. While the army managed to clear the northern al-Suwayda countryside, it failed to secure al-Safa or to locate the hostages.

The Russian support and participation of the local fighters from al-Safa will likely make the new offensive more successful than the last one. However, ISIS terrorists may take advantage of the current bad weather in the area.

syrian army took 2-3 months for this shit (and it is still on-going) . and they complain about afrin being less than 2 months. mighty catforces lmao

Ah yes the ultra hardcore nationalist Turkish Greywolves. How’s the internal security going in Turkey right now buddy? Your boys in Idlib were gonna get wiped out but they luckily enough were given a pass for now. Gotta save Turkey from that flood of refugees lol. What’s it at now 3 million?

You seem enjoyed by the civilians being killed. Good shows your hypocrisy, we went there for the people and to stop the refugee wave, not to please your terrorists, so keep dreaming that you’ll take idlib :)

Nah it’s cool, watching you Turks die for supporting terrorists in Syria is retribution enough. Sad to see though…

Glad Brunson is coming home, so thanks Turkem Burkem Hurkem Durkem. We will always remember your contribution in helping ISIS and terrorists set up through out Syria. Have fun with the now beefed up Kurds knocking on your door :)

You forgot afrin quick little k-rd :) you are a k-rd yourself you are talking like that son of a b*tch and that brunson has served for more than 2 years and they are releasing him because Turkey is a democratic state, unfortunately for you you seem too happy, we will fock all kurds, mark my word Manbij is coming, Afrin is done Northern iraq is in progress, all of you will die :)

Ahahahaha, I knew you were a little chicken shit the moment you starting dissing the SAA for no good reason. Your boys are dead in large numbers, your nation is weak and your currency is worth crap. Your leader rolled the dice and supported Jihadis in Syria that then came back and killed literally hundreds of your own citizens, and there was a failed coup that killed another 500 Turks while cementing Erdogan as a practical dictator. One good push to support separatists Kurdish groups in Turkey and it’s game over for you (and I don’t want the destruction of Turkey).

Also fyi, I’m not Kurdish. Actually I’m American with Iranian parents and I have strong Turkish blood on my mothers side so that’s that I guess.

The thing about you nationalistic Turks is that you are without a shadow of a doubt the most ignorant and delusion people in the ME, quite like the Saudis and Israelis in fact. You’re so far up your own ass with all that nonsense about Pan-Turkish pride and unity, while jerking yourselves off to Ataturk now long dead. Sad to say this stuff cause I like Turkey as a nation and people.

I genuinely hope no more innocent Turkish citizens die because of their inept governments decisions for supporting Jihadis in Syria. But it’s hard to say that Turkey doesn’t deserve what has come to it, the citizens don’t but Erdofus and his policies sure as hell weakened you as a state.

Listen kid. more terrorists will die. your daddy US will sell you. :)

How can “daddy” US sell me when I live here in the Untied States?

Gonna respond with some dumb comment ending with a smiling face?

Just hide, shlomo. And stay away from windows and high floors.

you were always thiefs. also my grandparents told, the first world when ruskie entered, was: chasa (watch) – see reichstag pictur :DDDD -, the second dewushka (girl ; megaraper animal nation are you!!!)

in all hotels steal ruskies averything what is movable.

and in your aborigin TV: 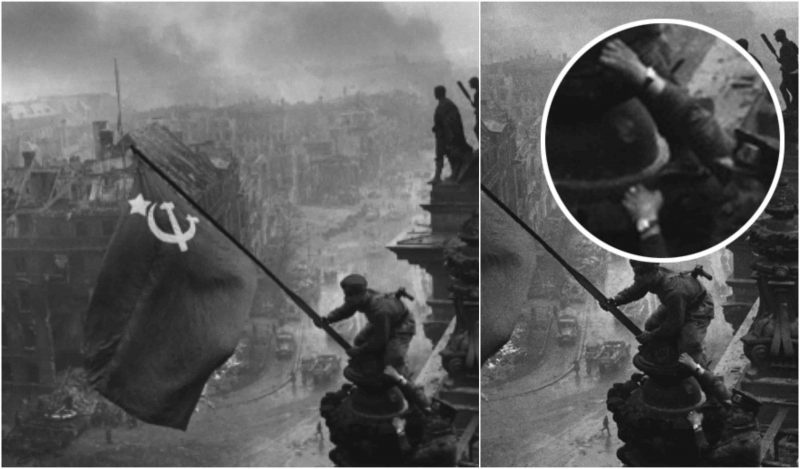 Shlomo, your oldest tricks of blaming others of your own crimes do not work here.
Have to say that your posts were always meaningless but at list they were entertaining to some degree. Recently your hatred and envy towards all Russian is just boring. Time to block you and force you to create another new account (how many already?)

no, i like russian songs, music, literature. and lot of other things. if you want me help, please give me link to song zheltye dazhdi. i can not find using internet.

btw,m i sent several people to transsiberian journey. it is one of the most beautiful tourist ways.

It is not possible to have this resolution on this picture. These pictures were altered. Do you think the soldiers of USA, UK, France, or whatever country which invade other all of them are so honest not to take the advantage of taking something free ? Please, you are so naive.

yes, were alterd. stalin removed this second soldier from the photo. and it is well known, that the red army soldiers collected watches.

If the Russians are supplying ammunition for the assault, I would suggest that some rather special ammunition will be used in a perfect proving ground :)

assad is weak. so long time is not able to eliminate that shitty little rathole! moreover, in homs and DEZ large part of country is ruled ny ISIS :(

He’s done pretty well when you consider he has been fighting the USA, UK, France, Israel and Saudi Arabia.
It actually shows how piss weak America is, a few Arabs kicking the mighty death machines arse.

Yes, but all of this have been done with strong help from Russia. Without Russia help, Syria would not exist at this moment.

True, Russia and Iran and Lebanon have helped save Syria from a terrible fate at the hands of the barbarians.

Not only russia all the work on the ground has not been done by russia.

Russia full participation in planning and air support is totally important, otherwise this situation will last forever with only Syria tactics.

My Loyalty is to My Family and my Family is the Survival of the White Race.
I Fight with a Passion for Syria for a reason.
If we can Rebuild Iraq and Syria…
The Jew told me You Hate me… What did the Jew tell You?