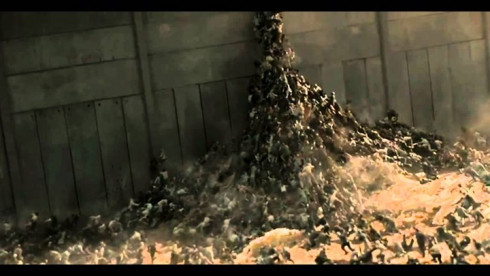 Original by Viktor Marakhovskiy published by Na Linii; translated from Russian by J.Hawk

The German city of Cologne was the cite of a mass demonstration of women dedicated to the events of the New Year’s night. The women were mainly concerned with two questions:

1. Women who were near the train station on the New Year night were hunted, captured, robbed, and raped by about 1,000 poorly brought up Middle Eastern men. The police has not arrested a single one of them. At all.

2. The German media maintained silence of what happened for four days, until the morning of January 5. European media maintained a similar silence. Nobody wanted to know anything, even though the victims of the “Cologne night” tried to mobilize the media into action using twitter hashtags. Only on January 5, after the news started to seep into English-language media from which it made it back into German papers and news sites, did things start happening. Suddenly Merkel was outraged and the mayor of Cologne issued a statement, and all the rest.

All of it is quite intriguing. The media write that about 150 police were sent to the area. There were about 1,000 suspects. Nobody was arrested. Still, almost a week later.

These numbers defy all logic. Cologne police chief who was placed in front of the cameras to face criticism, said that the police “encountered a wholly new dimension of crime”, though it’s not clear what that phrase means.

There are two possible explanations. The first is that there was no Cologne mass rape, it was concocted after the fact from a few isolated incidents (the adherents of this explanation point out absence of supporting video recordings, which show only a crowd, shouting, and fireworks explosions in the crowd). The second is that there was a mass rape (German media quietly mentioned that similar events took place in several other cities, though on a lower scale), but that it encountered the usual German media wall of silence. That wall was overcome only because the scale of the event was so large.

We, oddly enough, are not interested in the “did they rape or not” question. Ultimately, in the modern world of media technologies it’s not important “what happened” but “how was it used.” The self-immolation by a single offended fruit seller in Tunis five years ago launched the Arab Spring which has since killed hundreds of thousands of people, all thanks to skillful promotion.

Therefore we are not interested in “what really happened” but in the likely consequences.

Here’s the crux of the matter.
Given skillful promotion, “raped Cologne” could become a key and symbolic event. It’s potential is no less than of the “machine-gunned Paris.” Naturally, nobody was killed in Cologne, but whereas in Paris the 130 Parisians were killed by fewer than 10 terrorists, in Cologne there was a mob. A mob of 1,000.
A huge crowd of “others”, dear readers, is a crucial element of European mass consciousness. And its subconscious.
Those are Persians:

Well, you get the idea.

It’s also crucial to realize that in this case the crowd of “others” is not simply attacking, but raping.  It goes without saying this too is an important part of the European mass consciousness.

Therefore the honor roll of zombies-orks-huns also includes us, or rather our fathers and grandfathers:

That’s why Cologne is capable of resurrecting all sorts of historical mythologies.

Once again, provided there is skillful promotion, Cologne could become a media “Reichstag Fire” of sorts.

Then all manner of interesting things will happen.

I wrote already five years ago that Europe has maintained “velvet nazism” as a reserve ideology. Until a certain point, that ideology (in a suitably beautified way) was being pushed only by all kinds of “new Europeans”, mainly from Poland and the Baltics. Then they were joined by the Breivik admirers, and more recently by the Ukrainian neo-Nazis.

The instrumental use of “velvet nazism” is to, if need, be, replace the political correctness that has disappointed the electorate. One must however keep in mind that the de-facto legalized “euro-nazism” would be as different from the real thing as the “euro-left” differs from genuine communism. Since the current elites’ task is not leading the masses but rather fragmenting them, euro-nazism will most likely enter the political space as a useful boogeyman.

It plays that role in today’s France, where the “Nazi” label has been attached to the National Front which is far from the ideas of National Socialism.

On the other hand, it’s obvious that current EU politicians can’t easily reinvent themselves as “ultra-right.” Therefore we will observe an interesting political competition unfold over the next few years. A competition over who can best discharge their responsibilities to the business community, of which they will be part, among the “euro-nazis,” “euro-centrists,” and “euro-leftists.”

Since the current power center of Europe is on the other side of the Atlantic, it for the most part does not care who will win that race.

But we may have to get ready for new extreme acts of Russophobia.

How are we involved in all this, you might ask. We’re not Arabs, after all?

We were likewise not involved in the whole 1920-1940 interwar period in Europe. And in spite of that the whole power of Europe unified by a racial idea was launched against us.

The times are different, certainly. But as events have shown, one cannot rule anything out in the 21st Century which is already well underway.

In the meantime the “old official caste” of old Europe is defending its comfortable jobs. The mayor of city of Colognie, Henrietta Reker, said that she will organize a “peace march”. Which will “condemn both racism and sexism.”

You are a biased talking Soviet-Fanboy, your empire is dead, deal with it!

The USSR intervention in the, mostly failed, European Soviet Revolution (most intense in Hungary and Germany) is an epi-war or rather epi-revolutionary episode. It would have been interesting if Poland was defeated in that war, because then it’s plausible that the German and Hungarian revolutions, as well as others possibly, would have got much better chances of success and the whole history would have been changed.

But that’s pretty much within WWI peripheral developments. It’s not properly the inter-wars period, as the Greco-Turkish war was not considered such either but rather an offshoot of WWI.

Similarly the (despicable) Nazi-Soviet pact is not part of the inter-wars period but fully within WWII.

The only time that I can recall that the USSR actively intervened in the inter-wars period proper in Europe was in the Spanish Civil War, but how can we criticize that? It should have been France and Britain who supported the Republic but they did not and actually favored Italo-German intervention, only Moscow stood for the legitimate democratic government.

Out of respect and tolerance towards their new citizens perhaps German women could adopt the burka and refrain from driving and walking unaccompanied in public? STASI code-named agent “Erika” (currently NSA GESTAPO asset Fatty Merkill and Europeon Führerin) will be modelling the Frumpy Dame spring collection of famed gay Saudi Arabian designer Abdul Kamelfikker in all upcoming public outings along with Mayoress Reker of Cologne (Germany’s answer to USSA’S ravishing Nancy Pelotas). Her fashion “statement” should be an inspiration for all modest Europeons, and will hopefully be seen as a mark of acknowledgement to the strong “religious convictions” of our new Europeon citizens.

Remember Europeons, if you see something… burka it!

Are you implying that Marine Le Pen is behind the Cologne attacks? I think it goes well beyond her, more like Sarkozy and Valls like-minded personalities, although probably not French (German, US-American or otherwise generically NATO-ish).