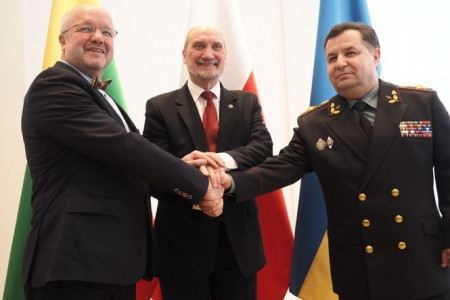 Original by Pawel Puzio published by Dziennik Wschodni; translation and analysis by J.Hawk
Poland’s Minister of Defense Antoni Macierewicz declared that the headquarters of the Multi-National Brigade has reached operational readiness to command. The minister did not rule out using the brigade in Ukraine, but only in a year, once the brigade reaches full combat readiness. On February 1, the next round of staff exercises titled Brave Band had begun in Lublin.
The ministers of defense of Poland, Lithuania, and Ukraine met in Lublin on Monday. “We received the report that the Multinational Brigade’s HQ is operational. In a year, in 2017, the brigade will become fully operational,” Macierewicz said.
The brigade’s HQ is based in Lublin. Its operational core consists fo three battalions. Poland contributed the 5th Mountain Rifle Battalion from Przemysl, Ukraine an airmobile battalion, and Lithuania a mechanized battalion. The brigade is commanded by Polish Brigade General Adam Joks, its deputy commander is Ukrainian Colonel Vladimir Yudanov, and the chief of staff post is held by a Lithuanian officer.
“The HQ is ready to exercise command. We have developed procedures for operational missions, inside foreign ones, as well as logistical and financial support matters, ” said Major Wojciech Jakubczuk. “Depending on the mission, the brigade could request the support by other specialized units belonging to the three armies,” Jakubczuk adds.
The brigade is ultimately to be 4,000 troops strong. It will not have a single garrison location. Individual battalions train in their respective countries. If the order to deploy is given, the brigade will assemble at the specified location. “According to our plans, there will be joint training exercises, starting later this year. Right now we are launching another round of staff exercises codenamed Brave Band,” Lt. Col. Oleksander Bain, brigade’s press officer, said.
During the press conference, the question of using the brigade on the Donbass, against Russia-supported forces. “I am not ruling out such an eventuality, but I am sure that by the time the brigade reaches full operational readiness, Ukraine will regain its territorial integrity,” Macierewicz responded. Ukraine’s minister of defense Poltorak concurred.
J.Hawk’s Comment: From the military perspective, the brigade is unlikely to represent an effective battlefield entity. Its units will have few opportunities to hone their tactical cooperation skills, and continue to use their own countries’ equipment which is not particularly inter-operable (especially when it comes to the Ukrainian battalion).
The political dimension here, however, is the more important of the two, and one has to wonder what political plans lie behind the formation of this unit. On the one hand, sending Polish troops to fight in Ukraine would be enormously risky politically and would almost certainly result in a very strong backlash from within the EU, which probably would not look kindly on Poland attempting to drag all of the EU, as well as NATO. At the same time, considering the current Polish government Atlanticist orientation, it is doubtful that such plans are being pursued contrary to Washington’s and London’s will. Poland might be acting in accordance with US neo-conservative agendas, in the hopes that the next US presidential election will bring into power an even more aggressive administration than Obama’s.  It does seem like a remarkable coincidence that the brigade is expected to become deployment-ready “in a year”–exactly when a new US president will occupy the White House. One therefore has to consider the possibility that Washington and London have grown disenchanted with NATO and are seeking to craft new regional military alliances that would sideline France and Germany. Poland and Lithuania are natural candidates for such an alliance, and deploying Polish troops to Ukraine would not only further US neocon interests, but also facilitate Poland’s long-term objective of reasserting its political and economic dominance over Ukraine and Lithuania and cut effective isolate Germany by depriving it of its ability to pursue any “Ostpolitik” whatsoever and making it hostage (as it has de-facto become on Syria, with refugees being used as a pressure tactic) to the US.

What is the state of Lithuanian army? I wish to see them in Donbas. Would be a wonderful suicide.