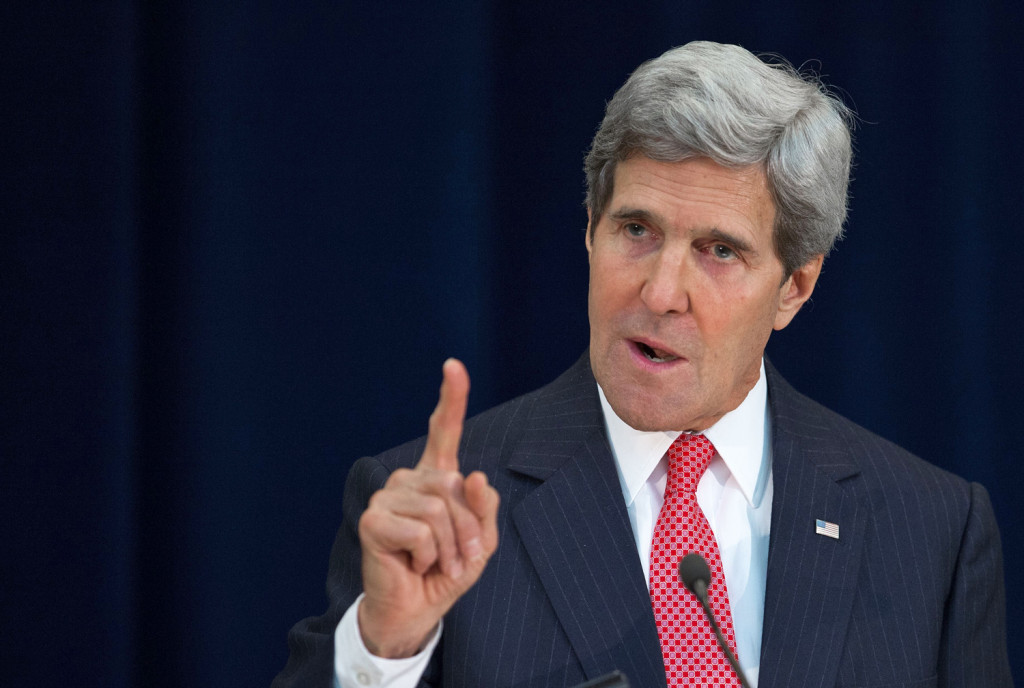 US Secretary of State, John Kerry, recently announced his Plan B: if the upcoming Syrian ceasefire agreed to by the US and Russia will fail, then Syria must be divided.

Kerry should not expect others to take his threats seriously. After all, only two months ago Kerry visited Moscow where he said that US has in effect given up on its intentions for a regime change in Syria, only for the US to switch its version, as Obama said a mere three days later that “Assad must go.” The disappointment with Obama’s statement did not prevent the First Lady of Syria, Asma al Assad, from visiting the Basilica of Our Lady in Damascus, along with Bashar, the President of Syria. She posted on Facebook pictures from the event.  The First Lady, Asma al Assad said that Syria remains a sovereign country regardless of US attempts at regime change.

Then, one month ago, Vice President Joe Biden announced in Istanbul, before the peace negotiations between the Syrian government and terrorist groups even began in Geneva, that if talks fail, US will support Erdogan’s Turkey in fighting against ISIS, although Turkey is obviously supporting ISIS.   This meant that Biden encouraged the collapse of the talks in advance, and was hoping that US and Turkey would bring about a regime change in Syria by force, against the democratic wishes of the people there.  Indeed, the Geneva talks collapsed shortly later, largely due to the rebels’ intransigence.  While Russia and Syria continued the airstrikes, the rebels failed to provide a complete list of participants. Knowing that they have the West’s baking, the terrorist groups took a tough line and talks indeed unraveled.  (While the Western media blamed Russia for the failure of the talks due to its continued bombing campaign, it is hard to take the West’s sudden concern with loss of human lives seriously, as by now it is rather clear that the US has in effect been helping jihadist groups in Syria while excuses which sounded reasonable earlier no longer seem feasible).

In the mean time, as the Syrian Arab Army made significant gains on the ground, Saudi Arabia and Turkey, both supporters of the most radical Islamic elements one can imagine, announced their plans to attack Syria, in their supposed ‘fight’ against ISIL. What they probably wanted was to save their rebels who were trapped in a small enclave that included Aleppo after victories of the Syrian army. Neighboring regions were and are still being liberated.

A ceasefire agreed between the US and Russia, which will take place this Saturday, was recently announced.  But it does not include ISIS and al Nusra.  This means that Saudi Arabia and Turkey wish to continue to support an Islamist takeover of Syria while the US is distancing itself from the two. But at the same time, one should not engage in wishful thinking and assume that the US has let go of its plans for a regime change. Kerry’s statement of a Plan B should be seen as an attempt to scare Russia into submission and into “pragmatism” with a Saudi and Turkish attacks being the alternative.

But Syria, the Russian Federation and the Islamic Republic of Iran, should not fear Kerry’s threats.  He has no right to decide on the internal affairs of Syria. And, after all, if the US was as powerful as it claims itself to be, it would have invaded Syria by now. But it cannot.

It seems likely then that the US wants to calm things down momentarily, perhaps because this is an election year, perhaps because it wishes to win back the Kurds to its side after it lost them to Russia, perhaps for other reasons.

Turkey, however, is still lusting for an invasion into Syria under a pretext of self-defense, and the Saudis are sending F-16s  into İncirlik in Turkey today (February 26). Therefore, the ceasefire will not hold for long. At the same time, an all-out conflageration can still be postponed, and what we may be more likely to see is the attempt to conquer given areas in Syria, under the excuse of creating “safe-zones.” What we will probably see is Kerry’s real Plan B: Merkel supporting Erdogan and the Saudis as they try to occupy areas that will be run by terrorist groups. An attempt to impose a no-fly zone over Syria may come only later.  But the Saudis are coming under increased pressure as the EU parliament just called for an arms embargo against Saudi Arabia, due to its war crimes in Yemen.