Exchange of Nadezhda Savchenko members of the Ukrainian Armed Forces for Alexander Aleksandrov and Yevgeny Jerofejev, Russian citizens who participated in the armed conflict in Donbas, some are interpreting as a sign that it will soon come to an improvement of Ukrainian-Russian relations. Are there really a basis for such a position and which are the main scenarios of development of relations between Moscow and Kiev in the new situation? 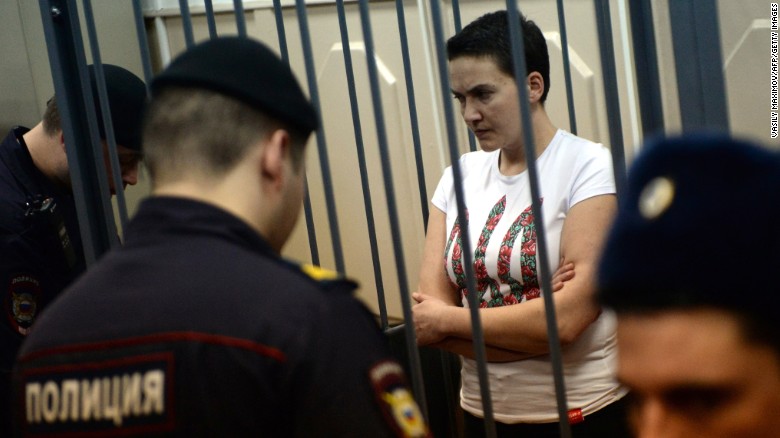 Written by Alexei Timofeyev; Originally appeared at ruskarec, translated by A. Djurich/А. Ђурић exclusively for SouthFront

Nadezhda Savchenko has spent nearly two years in a Russian prison, and on May 25 she returned to Kiev, where she was greeted as a national hero. On the same day in Moscow have arrived Russian citizens who were sentenced to prison in Ukraine. What kind of character can have this exchange of prisoners for Russian-Ukrainian relations and how events can still develop?

Scenario 1: The normalization of ties between Moscow and Kiev by establishing peace in the Donbass

Those who believe that improved relations between Russia and Ukraine may soon occur are confident that the release of Nadezhda Savchenko and exchange of convicts is not an isolated case, but rather part of a package of moves related to the conflict in Donbas which had been previously agreed by “Normandy Four”. In the opinion of the political scientist Andrew Jermolajev, director of the Institute for Strategic Research “New Ukraine”, “exchange is a sign that begins implementation of the formal agreement from Minsk and the informal agreement on the resolution of the conflict in Donbas”.

Expert is now expecting that this will be followed by statements related to conflict resolution. The parties may appear with agreed arrangement, which includes:

1. A permanent ceasefire;
2. Establishment of control on the border between Donbas and Russian Federation with the participation of the OSCE;
3. Defining the status and internal order of Donbass after the war;
4. Holding elections in the self-proclaimed republics;
5. The creation of a permanent dialogue format between Russia and Ukraine.

On the other hand, even if the leaders of the four countries agree on this point, the question remains whether it will be approved by the Parliament of Ukraine. In the Ukrainian Rada (parliament) extremists who oppose any agreement with the Donbas are quite strong. Jermolajev, however, believes that the MPs can be persuaded. You just need “all supporters of the peace process to take energetic attitude” and start “to work with parliamentarians”. Success in tackling the issue of Donbas will drastically alter the relations between Moscow and Kiev, Jermolajev is convinced.

Scenario 2: Nothing will change

Many experts believe that such optimism is unjustified. It is unlikely that Kiev will agree to a compromise on the issue of Donbas, believes Boris Shmelyov, head of the Center for Political Research on the Institute of the economy of the Russian Academy of Sciences. In his opinion, by the signing of the Minsk agreement Poroshenko brought himself in an awkward situation, because it will be extremely difficult, if not impossible to fulfill the agreement. Even if he manages to put the necessary legislation through parliament, it will cause a political crisis “with unpredictable consequences”. Maybe there will all be new elections once again, on which mandates will get even more extreme-minded politicians.

The current impasse in the opinion of this expert, is predetermined by the fact that in Ukraine parliamentarians are not only one anti-Russian minded, but also a considerable part of society, since in this country has already been formed appropriate public opinion. Therefore, the exchange of prisoners expert is not associating with the possibility of any significant progress in Russian-Ukrainian relations.

Scenario 3: A complete breakdown in relations

The third scenario is also based on the view that the exchange of convicts will not have far-reaching consequences, and that, on the contrary, possible further deterioration of relations between the RF and Ukraine are possible, until their break completely, but only when renewed intense fighting in Donbas occur. In the opinion of Boris Amelyov, this will happen if “Russia gets more or less directly drawn” into combat.

On the other hand, according to the liberal-minded experts from the “Indem” fund, George Korgunjuka, relations between Kiev and Moscow have deteriorated so much that it makes no sense to talk about the possibility of their further intensification. Expert believes that Kiev is not interested in the absolute termination of the relationship, because Ukraine is still largely dependent on Russia. This is true for the conflict in the southeast, because “part of the Donbas is under Russian control”. Rejecting any independence of DNR and LNR, the expert also noted that the key to solution of the conflict in the hands of Moscow.

Nothing will change, Ukraine is doomed, there is no longer Ukraine, Donbass cannot “return” to UKraine, after all the shelling and torture, they don’t want to. OTO, Porky cannot simply comply with

MInsk2, he can only wage war, that is the only recourse for him to stay in power and get some more loans from idiotic, servile EU, which is in its own way to disappearance. Russia does not want war, but it will be waged on her.

Hello Boris. A good morning to you. I agree with you; Ukraine at this point is toast. It is a money pit for the West and a point of conflict for Russia, pointed at her throat. It could stay like this for an entire generation or even longer. The EU, looks like it is gone too. It just doesn´t know it is already dead meat. All of this is very unfortunate for the ordinary people, who pay the highest price for all of this. I want something good to come out of what exists. However, I am not expecting it to be so.