“Insulting” – that’s how US President Donald Trump sharply reacted to the idea of a “real European army” proposed by French President Emmanuel Macron.

And it was how Macron rationalized the need for an independent military force for Europe that perhaps most irked the American leader.

Speaking on a tour of World War I battlefields in northern France last week, Macron said that Europe needed to defend itself from “China, Russia and even the United States of America”. 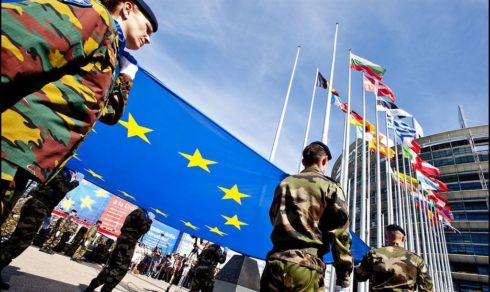 It was a pretty extraordinary choice of words by the French leader. To frame the US among an array of perceived foreign enemy powers was a devastating blow to the concept of a much-vaunted transatlantic alliance.

Since the Second World War, ending 1945, the concept of an American-European alliance has been the bedrock of a supposed inviolable, mutual defense pact. That nearly seven-decade alliance is now being questioned more than ever.

Macron’s call for a European army was further backed up by German Chancellor Angel Merkel who also pointedly said this week that Europe can no longer rely on the US for its defense.

Russia’s President Vladimir Putin has welcomed the proposal for Europe to form its own military organization, independent from Washington. No doubt, Moscow views such a development as augmenting a move towards a multipolar international order, which Russia and China, among others, have been advocating in opposition to American ambitions of unipolar dominance.

When Trump arrived in Paris last weekend along with dozens of other world leaders, including Putin, to commemorate the centennial anniversary marking the end of World War I, there was a notable frostiness between Macron and the American president. Only a few months ago, Macron and Trump had appeared the best of friends in what some observers referred to as a “bromance”.

During the Paris events, Macron sought to placate Trump by saying that the European army proposal would have a “complementary” role to the US-led NATO military alliance. However, their relationship further soured when Macron later delivered a speech in which he made a veiled rebuke of Trump’s “nationalist” politics.

Days later, on returning to Washington, Trump then fired off a fusillade of angry tweets attacking Macron in very personal terms over a range of issues, including “unfair” economic trade and France’s alleged ungrateful attitude towards the US liberation of Paris from Nazi Germany during the Second World War.

The rift between the US and Europe has been brewing even before Trump’s presidency. For years, Washington has been carping that the Europeans need to spend more on military defense, claiming that the US has been shouldering the burden for too long. Trump has taken the griping to a new, higher level. Recall that he has threatened to pull out of NATO because the Europeans were “free loading” on American “protection”.

The irony is that now the French and German leaders are talking about setting up their own military defenses, Trump has blown a fuse.

Evidently, the American contention is not about “burden sharing” of defense. If Washington was genuinely aggrieved about supposedly defending Europe at too much of its own expense, then Trump, one would think, would be only too glad to hear that the Europeans were at last making their own military arrangements, and taking the burden off Washington.

This gets to the heart of the matter about the real purpose of NATO and presence of tens of thousands of US troops stationed in bases across Europe since 1945. American military presence in Europe is not about “protecting” its supposed allies. It is, and always has been, about projecting American power over Europe. In reality, American troops and bases in Europe are more functioning as an occupying force, keeping the Europeans in line with Washington’s strategic objectives of hegemony over the continent.

Macron and Merkel’s vision of a European army is probably fanciful anyway, without any real prospect of materializing. How such a new defense arrangement would work independently from the 29-member NATO alliance led by the US seems unwieldy and impractical.

But the latest tensions between Washington and European leaders over military organization demonstrate the real nature of America’s relationship to Europe. It is about domination by Washington over Europe and has little to do with partnership and protection.

When Trump and previous US presidents have urged greater military spending by Europe the ulterior agenda is for Europeans to pay more to underpin American military presence, not for Europeans to find their own independent defense arrangement.

Tensions in the transatlantic axis seem to be coming to a head, heightened by Trump’s nationalistic “America First” policy. Rivalries are sharpening over trade, US sanctions on Iran, Trump’s threats against European energy plans with Russia, the Paris Climate Accord, and squabbling over NATO expenditures.

There is nothing progressive about Macron or Merkel’s call for a European army. It is more to do with France and Germany wanting to assert themselves as great powers and to shake off American tutelage out of frustration with Trump’s domineering petulance.

Only last week, Macron caused controversy when he praised French military general Philippe Pétain who collaborated with Nazi Germany as leader of Vichy France (1940-44). Macron wants a European army to satisfy his own nationalistic ambitions of revamping French global power. This week, he spent the night onboard a refurbished French aircraft carrier, the Charles de Gaulle, from which he gave a media interview saying that being “an ally of America meant not being a vassal”. Touché!

A progressive challenge from Europe to American power would not involve setting up a new army. Instead it would involve Europeans pushing for the disbandment of NATO as an obsolete organization and for the withdrawal of US-led forces which are dangerously amassing on Russia’s border.

Nonetheless, the one positive thing to emerge from the transatlantic spat over military defenses is that it illustrates more than ever how European protection is not the real purpose of Washington’s relationship to the continent. The purpose is one of using Europe as a platform for projecting America’s power, in particular against Russia.

The recent announcement by the Trump administration that it is willing to rip up yet another nuclear arms control treaty – the INF following the ABM in 2002 – clearly shows that Washington, ultimately, has recklessly scant concern for Europe’s security with regard to a possible future war with Russia.

For Washington, despite all the chivalrous rhetoric, Europe is not a partner nor even an ally. It is a vassal. Admittedly, thousands of American troops died while bravely fighting wars in Europe. But they are distinct from the US ruling class. At bottom, Europe is merely a battlefield for American military power, just as it was in two previous world wars. One hundred years after the end of World War I, the same callous calculus for the imperial planners in Washington is at play.

European ideas for independent defense is why Washington has reacted so furiously. It’s not willing to give up its European front.

A European Army? That idea sounds familiar Monsieur Cockroach de Macron. A student of military history will recall that there was just such a thing during World War II led by Nazi Germany directed against the Soviet Union in its war of annihilation for Lebensraum. This consisted of Germany, Italy Slovakia, Finland, Croatia, There were also thousands of volunteers in the Waffen-SS from Norway, Denmark, Belgium, the Netherlands, France, Switzerland, air and ground units from Spain and collaborators in mass murder from occupied ares of the Soviet Union. We all know how that “European Army” fared. So reconsider your proposal you scroungy, little, tough talking low personal hygiene worm. I consider the present NATO to be obsolete and more harm to the world than a benefit to peace, especially in Europe. Like we used to say back in my US Army days in the 1980s: “We will fight to the last German.” There is no longer a Warsaw Pact alliance so there is no longer a need for a NATO.

Macron hopes to get a job at Gazprom or Rosneft, like Schröder

It’s a way of getting rid of the American occupiers. The US has occupied Europe since WWII, and the Europeans have had enough of the neanderthals. The EU was the first step to free Europe, an army is a logical next step.

the neanderthals were es clever as cromagnonians. if one neanderthaker would walk in streets of canberra, you would think, he is an englishman. red hair, white skin, freckles. this all came from neanderthales.

Neaderthal is term best applied to kikes like you solomon.

that is good. because were more intelligent then homo sapiens sapiens

Yes sorry to insult neanderthals, I have edited my post.

what do you smoke?

Better then the crack you smoke solomon kupeck.

I don’t buy it. I really don’t. For me, this is yet another dog and pony show.

People should be very, very, VERY cautious about this (false) narrative of “Tensions in the transatlantic axis”, of “Europe seeking independence from the US”. This sounds just like words, fine rethoric and posturing from the EU, Macron, Merkel and Trump with NO real actions. Nothing substantial in the end except … a real EUROPEAN ARMY which … “would have a COMPLEMENTARY ROLE to the US-led NATO military alliance.” Here we go!

As noted elsewhere in this article, “A progressive challenge from Europe to American power would not involve setting up a new army. INSTEAD it would involve Europeans pushing for the disbandment of NATO.” Yeah, I agree … and that itself should raise suspicion about the hidden goal of this new “european army”.

6 months ago, May (UK), Merkel (Germany) and Macron (France) already agreed on a new force called the “European Intervention Initiative”. And Stoltenberg, head of NATO, was delightetd with this initiative. “Everything that can strengthen our deterence against Russia is welcomed” he said or something similar.

There’s no doubt in my mind that Trump, May, Macron and Merkel are all Deep State’s assets .. and on the same boat. There’s no rift between the US and the EU, but these tactics are needed to avoid people worrying about Europe / US likely on a war path and rearming.

With all the Anti-Russian hysteria made, washington now demands its protection fees. Europe is truly a vassal, forced to commit an army at its expense, under the command of another.

nice, intelligent answer from a gorilla.