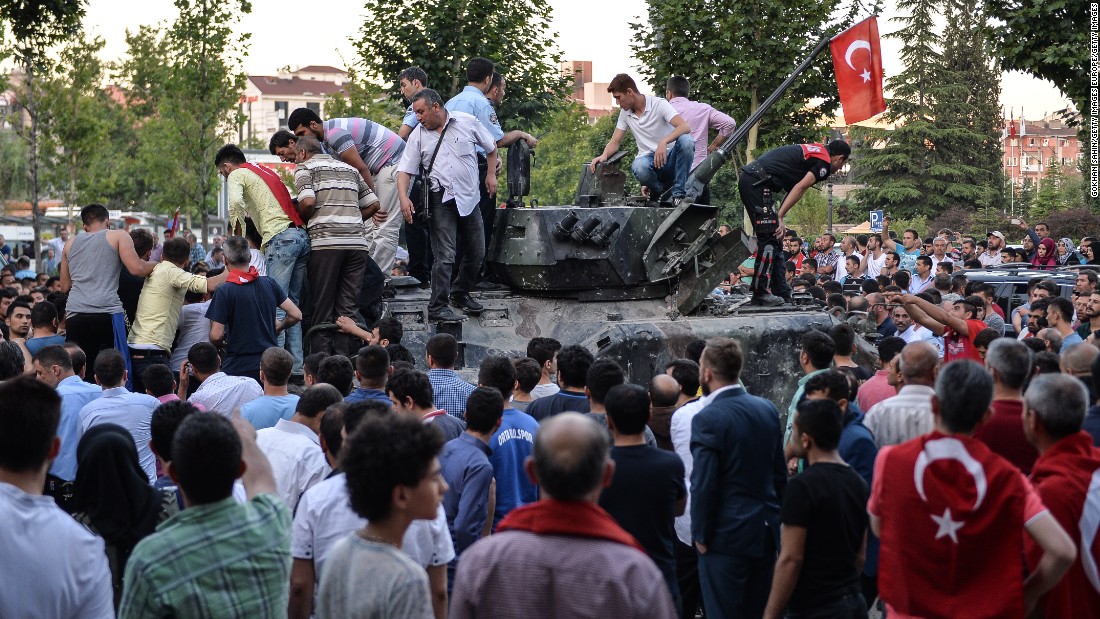 The first reports that the Turkish army was out in the streets of major cities, appear at about 11pm on Friday, shortly before midnight. The military blocked the bridge over the Bosphorus in Istanbul and take control of some government buildings. The presidential palace is shot at. The Parliament is surrounded by tanks. The Prime Minister of Turkey states that there is an attempted military coup underway. Hundreds of thousands of Erdogan’s supporters pour out in the streets, and try to prevent the coup. People stand against the tanks. The coup is prevented and Erdogan announces that the military putsch had received instructions from their chiefs in the United States. More than 130 people are arrested [SF editor: about 3000, according to the recent reports] and a purge in the army begins. One of the generals involved in the putsch is killed. Citizens and representatives of the police special forces lost their lives in Ankara and Istanbul.

How did we get to an attempted coup in Turkey?

First – there is a serious ideological conflicts between the army, which traditionally is considered a guarantor of secularism in the country, and the Islamic authorities. President Erdogan created the impression that he finally put the generals under control, forced them to abandon the secular principles of Kemal Ataturk, removed the “fifth column” in the ranks of the armed forces and cleansed the officer corps by using large-scale trials. Now we understand that this impression does not correspond completely to the truth.

Second – according to many ordinary Turks and a significant part of the elite, the president is responsible for the destabilization of the country. The society is highly divided, as highlighted by the protests of 2013. The regime stubbornly refused to listen to the arguments of opponents and cares only for its electorate, which is only half the population.

Fourth – an unprecedented media censorship is imposed. Medias are closed, journalists are dismissed or jailed. In May, two journalists were sentenced because they revealed facts about how Turkey supplies weapons to DAESH.

Fifth – as much as it denies its support towards this group, Ankara can not hide its actions towards making it stronger.

Sixth – Turkey managed to ruin its relationships with all key players in the world and in the region. In Syria, the events developed quite differently from the way Erdogan hoped they would. His man in Egypt, the Islamist Mohammed Morsi was ousted from power. Relations with the EU are awful, proof of which is the recognition of the Armenian Genocide by Germany. The Kurdish issue creates a serious conflict with the US, and the downing of the Russian bomber froze relations with Russia. Until recently, Erdogan’s only ally seemed to be Azerbaijan. Yes, in the last several days Ankara managed to improve its relations with Israel and Russia, but the coup was certainly planed well before this improvement.

The attempt to overthrow Erdogan failed. But the divisions within Turkish society remain. Its only a matter of time before a new clash.

IT was attempted because, Erdogan is a Zionist-surpremisist bigot who opposes Palestinians, Syrians, Lebanese and so forth. He believes in expanding Israel into a super large state. Erdogan does not represent his people, he represents international banksters, Rothschild’s, and so forth.

Turkey is a full blown Terrorist cultivator 24/7. It is the duty of the world to end this. If the people were not terrorist, they would have allowed their Terrorist regime to fall. By the people defending Terrorism such as Erdogan, then the basic population of Turkey themselves are terrorist and terrorist supporters.

So Erdogan is restrengthen his powers trough a false coup. Presumably with the help of NATO.

Now what is interesting is him going to his knees so badly just a little time ago.

Was that to ensure the false coup would not go “live” and he might loose control?

False flag to purge the military.

Actually i think i have to agree with you. Another possible narrative is a US lead coup which explains why Incirlik airbase is on lock-down. If it was a US coup then NATO is in big trouble.

I don’t think the Sultan has cojones to cause enough trouble for them.

Turkey today is the result of pressure from the Saudi royals and the corporate elite who controls the Pentagon.

Then they should think twice about supporting the man who is turning their country into Saudi Arabia, North.

Who ever started planned and executed the coup attempt… the winner is Erdogan. He has the next elections in the pocket. He will purge all opponents now. political opponents inland, abroad, army the state apparatus, media, he will kick them hard. He should turne them to ISIS over the border. Their heads will be chopped off within minutes.