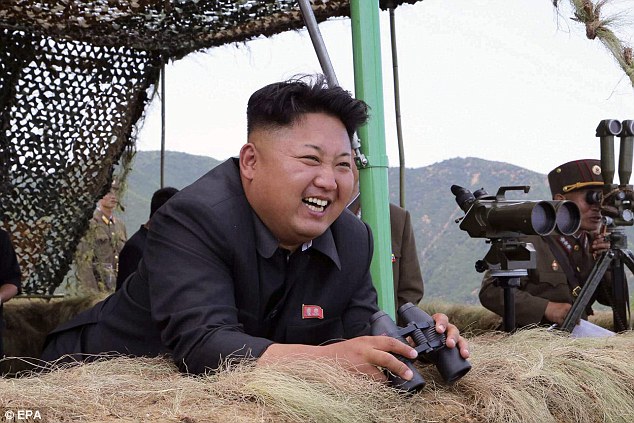 By now most people are completely desensitized to stories involving North Korea. One can only hear about so many blustering threats, missile launches, and state sanctioned executions, before those incidents are no longer surprising. Over the years we’ve seen it all, and most folks don’t really pay much attention to what’s going on in the Hermit Kingdom. That’s unfortunate, because they’re not paying attention as the Trump administration inches towards war with North Korea.

The first definite sign that the current administration was going to take a different approach to North Korea, was when Secretary of State Rex Tillerson stated emphatically last month that “all options are on the table.”

“Let me be very clear. The policy of strategic patience has ended. We are exploring a new range of diplomatic, security and economic measures. All options are on the table,” Tillerson told reporters during a joint news conference with South Korean Foreign Minister Yun Byung-se on Friday.

“Certainly we do not want to, for things to get to military conflict,” Tillerson said.

However, he went on to say that “if they (North Korea) elevate the threat of their weapons program to a level that we believe requires action, then, that option’s on the table.”

He added that a “comprehensive set of capabilities” is being developed to deal with the country.

And at least one of those options is already in place. Before that interview even took place, US special forces were already training to decapitate the North Korean regime.

Despite that threat, North Korea has refused to back down on their nuclear program, and for good reason. Kim Jong-un’s regime believes that they won’t be safe from foreign invasion unless they have a nuclear tipped ICBM that can be launched at targets that are thousands of miles away.

The US government on the other hand, has taken a different position. Our government believes that North Korea can’t be trusted with that kind of military capability. In a sense both sides are correct, but clearly those opinions are diametrically opposed. Unless one side backs down, there will be war before North Korea demonstrates that it can launch a nuclear tipped ICBM.

And President Trump has tacitly admitted that he’s willing to go to war with North Korea. During a recent interview with Financial Times, he stated if China can’t or won’t reign in North Korea, then our government is willing to “act alone.”

POTOMAC FALLS, Va. (AP) — President Donald Trump says that the United States is prepared to act alone if China does not take a tougher stand against North Korea’s nuclear program.

Trump’s comments in an interview with the Financial Times come just days before he is set to host Chinese President Xi Jinping at his Mar-a-Lago estate in South Florida. The two are expected to discuss a number of issues, including North Korea, trade and territorial disputes in the South China Sea during their meeting on Thursday and Friday.

“Yes, we will talk about North Korea,” Trump told the newspaper for a story that appeared Sunday on its website. “And China has great influence over North Korea. And China will either decide to help us with North Korea, or they won’t. And if they do that will be very good for China, and if they don’t it won’t be good for anyone.”

Without China’s help, there can’t be any peaceful resolution with North Korea, because China is the closest thing to a friend that country has on the global stage. Unfortunately, there isn’t much of a chance that China is going to defang this regime anytime soon. If they could they would have done so a long time ago. They may enjoy having a communist buffer state between their capital and an American ally in the south, but they don’t want to live right next door to a certifiably insane regime with nuclear weapons.

I don’t think that China could ever convince North Korea to give up its nuclear program. Kim Jong-un saw what happened to countries like Libya and Iraq after they abandoned their WMD programs. And North Korea is probably just as afraid of regime change at the hands of China as they are of America, because China would prefer a buffer state that is much more obedient and prosperous (and you know, not armed with nukes that at the command of a lunatic). Even North Korea’s closest friend is kind of an enemy, and they need capable nukes to defend themselves from China as well.

So if China can’t convince them to give up their nukes, and the United States won’t tolerate a nuclear armed North Korea, then there’s only two possible outcomes. Either our government is going to blink in this standoff, or there’s going to be war.

Personally I think Trump is putting on the pressure on China to do something instead. Going to war with North Korea would be messy, tie down massive US forces and attention for years and runs the risk of utterly assraping South Korea in the process. The North’s military may be outdated and its gear antiquated, there’s a shitload of it, they’ve got nukes and a gazillion artillery pieces at the ready at the DMZ to plow over Seoul.

Not to mention that it would take months to build up the US military to sufficient levels to actually start a war, giving the North ample time to prepare. And using special forces in a socalled decapitation strike is a risky business, as the Fat Kim is not some 3rd War Lord sitting in a cave in the middle of f***ing nowhere. He’s probably the most well protected man in the most well guarded city of a paranoid armed to the teeth country.

If I was China, I’d be filling North Korea with concealed SAM batteries right now. Because ultimately no one cares about NK people, their suffering or the “nuclear program”. It’s all about getting more land closer to the Chinese border to fill with THAAD (or should we say vertical launched cruise missile systems) for the inevitable war with China. NK will become a similar peacekeeping operation as in Yugoslavia which are in reality occupational forces, kind of like the Germans in western Poland in 1941.

Remember that China provided massive military assistance to the Democratic People’s Republic of Korea during the war (1950-53) and suffered enormous losses in doing so. In a cynical way, they do not want to see their sacrifice thrown out by a reunified Korean peninsula regardless of the fact that North Korea’s economy is a total failure. The only assets that North Korea has are its nuclear weapons, a large military and a fanatical national resolve to resist any aggressor and remain independent. A unified peninsula would mean US troops near the Yalu River. The last time that happened led to all out war between China and the US-led United Nations forces.

I think the world has changed a lot since the 1950’s especially when it comes to China. For one thing Mao is not calling the shots in China. I don’t think China wold need worry about US troops at the Yalu river. I think it would be the US that would worry that China and a united Korea would become good neighbors. Maybe so good and close that the Koreans send the Americans home once its all done. I would bet that China and South Korea have had a few chats about what a unified Korea would look like.

We need to just leave them alone. Until they start a war, let them be!

This war must be done. Do it quickly.

Oh, the war could be over very quickly. The NK army is incredibly antiquated. The post war reconstruction of Seoul, and the complete and utter rebuilding and deprogramming of North Korea, that will take decades, at least half a century.

There won’t be a war with NK, as their is too much to lose for both sides. The US/SK suffer massive damage to Seoul and NK would lose their regime (and the war).

Then it would be also Trumps or Americas last war. Very unlikely. In May Key Resolve/Foal Eagle military provocations are over and we are waiting for a South Korean shift of policy, resulted by the coming elections. Thats what should be expected on the Korean peninsula and not war.

This “analyst” is the typical kind of zombieficated american. He still believes that the u.s. is capable of fighting wars against countries with an existing army/airforce like North Korea. That totally ignores the fact that the u.s. in the past only were able to “fight against” -or better just to destabilize- countries without of any military infrastructure, like Afghanistan or fully destabilized or wrecked countries like Iraq or Libya. Also he ignores that the u.s. is actually in an internal power struggle which is getting every day closer to a civil war. And oh yes, i forgot, everyone that opposes american supremacy plans in the world is a “lunatic”…racist fuck. I wonder what this “article” searches on this good site.

This situation is just a war of words and political posturing for consumption by uninformed, misinformed, brain-washed, low information, gullible people. All of this talk is Kosher chicken hawk nonsense straight from the Washington, DC beltway. Kim Jong-Eun’s mistake is that he makes his thoughts public to the entire world. same with President Trump. This is all for the media and the masses. There will be no war. After Mr. Xi’s visit to the US, the usual announcement will be “they agreed to disagree and departed on amicable terms” plus Mr. Xi will receive a “Make America Great Again” T-Shirt, baseball cap and coffee mug (all made in China of course). You have to admit that Mr. Kim has an impressive, though outdated, military capability that is not to be underestimated.

Trump has taken over seeveral wars.

Why do Korea not collapse. I dont get it.

Except they’re being totally rational? Also, 90% of news on NK is lies.

I think you miss the point. North Korea isnt going anywhere any time soon. If North Korea were to vanish who would be the biggest loser? The USA? Japan? I guess one could say Kim? But if North Korea were gone there would be no reason for the US to sit on China’s front door step. China would be ok with a large wealthy united developed Korea as a neighbor and trading partner. I wonder how much LNG Russia could pipe directly into Korea once united, sharing a border would put Russia’s gas pumps right at Korean fingertips. A united Korea, especially one that did not require US troops to defend it from its mad brothers in the North would benefit the US the least! With the boogie man gone there would be no need for Daddy to check under the bed every night. The US would be pushed back to Guam. Smart money says the USA keeps this going for another 25 years. But when was the last time smart money was right with anything the US government does?