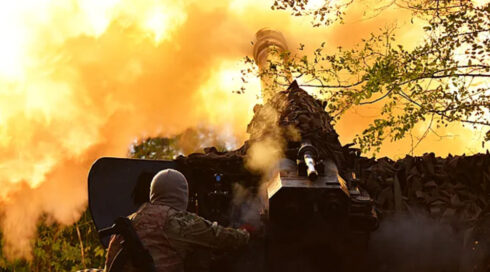 Amid the ongoing military offensive of Russian troops and PMCs on Donbass front lines, many people wonder: Why is the city of Donetsk still suffering from artillery shelling? Speculations of Ukrainian propaganda go so far as to blame Russia for the shelling, allegedly aimed to justify Russian further advance on this front.

Since the beginning of the Ukrainian anti-terrorist operation against the population of Donbass, stores, squares, and civilian homes have been constantly hit by the Ukrainian military in dozens of settlements, including the capital of the DPR Donetsk. Thousands of innocent civilians have been wounded and killed.

The deaths of civilians in Donbass are not the result of accidents. The Kiev regime has been intentionally shelling civilian targets. Some of the Ukrainian attacks hit crowded places and claimed lives of dozens of civilians at once. For example, in March 2022 a Ukrainian “Tochka-U” missile was shot down over the very center of the city of Donetsk and the wreckage killed more than 20 people and wounded 23 others. There are numerous evidences of the absence of military facilities in many areas of the city that are constantly shelled by Ukrainian military, such as Kievsky, Kirovsky and other districts. 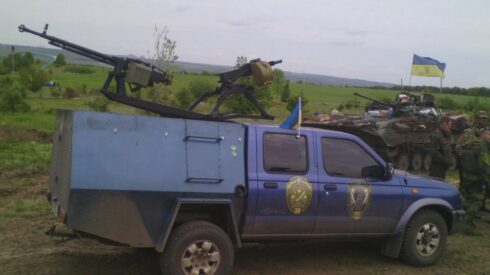 The shelling on civilians is carried out both from Ukrainian positions located on the Donetsk outskirts with heavy artillery, including with the NATO weapons, but also by the so-called “roving” artillery of the AFU.

Ukrainian forces have been actively using the tactics of “roving” mortars for chaotic shelling of cities not controlled by the Kiev regime in the DPR and LPR since 2014. The high mobility makes it difficult to timely identify and destroy the mortars which are quickly placed on the armored vehicles. Due to the long-range capabilities of modern MLRS such as the Soviet-made “Grad” makes it possible to conduct unimpeded shelling at ranges exceeding 40 kilometers. LINK 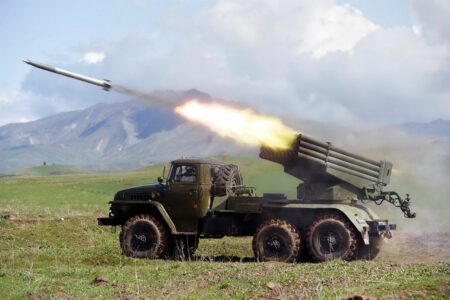 Apparently, the main goal of the so-called “roving” mortars and MLRS systems has always been to destabilize the situation in the war-torn regions, terrorize the population, disrupt the peaceful life of ordinary people, create panic and hatred.

In addition to the psychological and physical impact, there was another, very specific goal of the shelling of civilians. Roving mortars played an important role in Kiev’s attempts to disrupt the negotiation process between Western countries, Russia, and then unrecognized republics, which was completely undesirable to Kiev. The objective was to provoke the armed forces of the LPR and DPR to return fire and then accuse them of escalating the conflict.

Nine months of the Russian military operation have shown that shelling of civilian settlements can only be stopped by the complete destruction of Ukrainian military positions on the outskirts on the city of Donetsk and implementation of full Russian control of the territories of the Donetsk and Luhansk Republics, since all attempts of a peaceful settlement of the conflict are thwarted by Kiev, as it has been the case since 2014.

why is ukraine losing all rail, water, electricity?

why gestapo and jens married?

Thats the point about controlling the borders out of artillery range,there should have been a massive Blitzkrieg from day one to drive the Nazis out of range,its not too late to change the tactics,i hope there will be a massive offensive when the ground freezes,but Russia needs to put enough troops in the field even if that half a million plus,its a scandal those bastards are still shelling Donetsk.

this is why i went from neutral to active hatred of ukro-nazis. They are despicable rubbish that needs to be taken out.

Even more despicable, is the US and EU who support them. The West carte blanche for Nazis to commit war crimes against civilians, same goes for the Palestinians who are being murdered each day by Zio-Nazis. The three monkeys; US EU and UN, I hear no evil, I see no evil and speak no evil.

Better to ask “Why are there any Ukie forces left at all”? Why haven’t the Russians long obliterated them?

Russia should liberate all land to Dniepr river. The rest should be dismantled and governed by occupation zones by Poles, Hungary, Moldova, Romania, like Germany after WWII by allied forces… Ukronazis exterminated (not allow them to run under USA deep state umbrella).

On the other side of the Dnieper River, a 30 kilometer war-free zone must also be established.

Because they do what nazis have made always ! Killing innocent peoples all the way, and many times from envy they lost battles. So, the only way for those motha fuckers bandera piece of shit will stop that is when Russia will inflict a SUDDEN and devastating blow on their heads and will tell them if not stop they will be immediately strike with the second SUDDEN and DEVASTATING one. I let russian HQ to determine what that devastating punch can be !

Hey, another portion of denazification it seems to happen RIGHT NOW ! Reported more than 100 missiles attack on all Ukraine infrastructure as a retribution for Donetsk civilian heavy bombardement and Engels airport drone attack. Hurraaaaaay !!!!!!!! Hope for the remaining 15% of electric denazification. Slava Rossyia !

Exactly, that is the question. It is not possible to understand why Russia hasn’t been able to stop this situation. Really, it looks strange due the assumed high fire, intelligence, military capabilities of Russia.

EU must not be USA slave
Reply to  gustavo

Because more than 40 states are pouring weapons and mercenaries into the Ukronazy shithole?

EU must not be USA slave
Reply to  gustavo

Because USA deep state pours hundreds billions into that insanity of a state and they forced all vasal states up to Australia to direct tech and mercs to pump up the Nazy stronghold?

Dear friends, this text does not answer the question in the title. The shelling of Donetsk is possible only because the Russian army is not able to destroy both semi-stationary and mobile launchers. The problem lies in the lack of reconnaissance capability, and most reconnaissance systems work with optical or infrared systems. This makes the mobile systems invisible under a tree or a roof. I had expected that the authors of this text would look a little more thoroughly into what is actually happening. with kind regards, willi Asuncion, Paraguay

“because Russians are good for nothing idiots.

End Ukraine once and for all!

Ukraine is asking for 6 times a day X100 rockets… and two nightly supplements as well, until January. When it’s about time for a final push and dismantling this abomination of a state, an ILLEGAL entity just like ISIS and their ilk.

Russia needs a Zhukov to roll over the UkroNazis and take Xarkov, Dnepro and Odessa quickly.

EU must not be USA slave
Reply to  jmNZ

Zhukov?! That would be tragedy for Russia… Vasilievsky or Malinovsky style would be the way.

Konstantin Rokossovsky might be another positive example. See operation Bagration.

Carlo
Reply to  EU must not be USA slave

the real question: why the ukro positions are still in range of Donetsk? Their bunkers should have been destroyed since a long time ago.

Because idiot putin launched a half ass war instead of crushing Ukraine with a blitzkrieg attack with millions of troops.

In this Connection just another idia: i just read that the russian drones because of low mass too subsceptible for winds from the sides. But this problem can be solved without changing the construction of the Drones by taking into account the direction of the wind in relation to the shooting direction, the speed of the wind and the distance of the target. The drone then will not fly straight but in a curve.

Russia Is Looking Like A Fool, Need I Say More!

There’s one explanation that fits the events perfectly, but the programmed masses on both sides won’t look. Get a map of the long-planned “Heavenly New Jerusalem” that will be in southeastern Ukraine, and watch as the entire area is cleansed of Slavs by the efforts of both sides. Kherson is the center of the new Jewish state, and it now sits vacant. The shelling of civilians will continue to get worse, because Putin and Zelensky are both loyal to and members of Chabad, and are cooperatively removing the native population, same as has been done to Palestine. Nothing but pervasive cluelessness among the populations on both sides.

I´m glad to see people with open eyes and minds. But most of the “civilized population” are hypnotized and brainwashed bio-robots. Even local admins are deleting comments like yours… I wish you good luck, calm and clear mind to stay healthy human being in this insane reality :)

Thanks. Good to contact intelligent life out there. I often feel like I’m operating a SETI station, sending out signals but not expecting to reach any conscious beings :-) And yes, I’ve been censored more times than I can count in the so-called ‘alternative’ media and even on Russian-friendly Telegram channels. Nobody wants the truth getting out about anything. Maybe the time for truth will come eventually, and like you say we need to stay calm, healthy, and wise to help those who want to face the truth. Godspeed to you.

I have noticed one interesting thing on several web sites ( alternative + MSM ) with open discussion thread. There were a lot of proNATO or proPUTIN comments. Some were inteligent with facts or just normal argumentiation, some were crap and pure hate, some were just spam. Nothing was deleted, even racist nazi comments about “russian subhumans” or glorifing excecutions of russian POWs. But when I joined the discusion and wrote about Chabad connection with Putin, Zelensky, Trump, JWS role in nazi Germany ( even in top millitary ranks ), I was immediately deleted and recevied BAN even on some alternative sites ;) So I become mailny quiet/silent observer and write comments very rarely now. If you want, you cant write me ( southfront.0w6ib@simplelogin.co ) and we can share some interesting or important informations.

Yep, I’ve seen the same thing. talk of hatred and killing of Ukrainians or Russians isn’t censored anywhere, but mention who’s organizing and funding the killing and you get banned almost everywhere. I’ve been censored by many alt ‘journalists simply for mentioning that the Bolsheviks were Jews organized out of London. Truthful Russian history is basically banned in the West. Obviously someone is controlling the narrative the same on both sides. Sad that people don’t see it. Sent you an email yesterday.

Why? Because a certain group are sitting on their thumbs. Thats why!