Russia decided to come back to the Balkan peninsula. Tthe political processes in it are a geopolitical litmus for Russia, they act as a kind of a barometer by which Russia can measure its strength in the world.

This article originally appeared at Katehon

Together with Serbian Krajina (territory in today’s Croatia) Bosnia and Herzegovina represents the western part of the Serbian ethnic map, which in practice means it is the most western territory compactly inhabited by Eastern-Orthodox Christian Slavs. Bosnia’s proximity to the Mediterranean basin and also to the Vatican, made it always a field of intensive geopolitical struggle for influence. 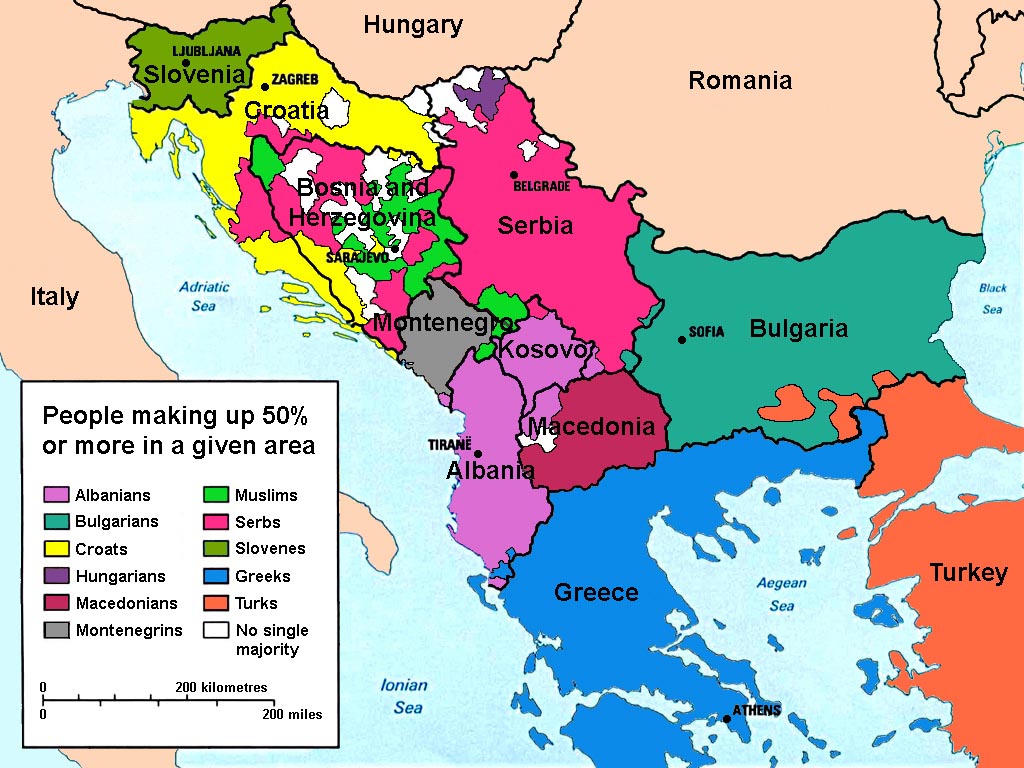 Forces drawn to it came from several vectors. From the east and south-east this vector was the Islamic world: historically Ottoman, and now modern Turkey, the Levant & Saudi Arabia. Drawn in from the west was the Roman catholic church: the Vatican, Venice, Austro-Hungarian Empire, now Western Europe and later on the US. From the north-east, the immediate east, and the south: the Eastern Orthodox, i.e., Russian, Greek, Byzantine. The latter influenced various Serbian feudal states that were under the civilisation influence of the Byzantine empire, and later on the Russian empire, during the Turkish yoke and after the liberation.

This proximity to various geopolitical centres resulted in the infliction of extraordinary violence upon the Orthodox Christian Serbs of Krajina and Bosnia-Herzegovina. The results of the centuries long Ottoman rule are well known, but the Croatian “Ustashe” genocide inflicted on Serbs of Krajina and Bosnia-Herzegovina during WWII inspired, led, and perpetuated by the Bosnian and Croatian Franciscan Roman Catholic clergy, was the most dramatic example.

The Ustashe terror rapidly changed the ethnic balance on the edges of orthodox civilisation on the expense of orthodox Serbs. The ethnic cleansing of Krajina Serbs by the Croatian army in 1995 was just a continuation of the same process. Paradoxically the result of the fall of two extremely secular and anti-religious empires (the Soviet Union, as a global empire, and Yugoslavia as a Balkan empire) was that the Eastern Orthodoxy was pushed away Eastward on the European south. Ethnic cleansing of Serbs from Knin Krajina (today’s Croatia) and Bosnian Krajina (North-western part of Bosnia predominantly inhabited by Serbs before the war) was conducted with direct assistance of Germany, Vatican as well as the United States in the final phases of the war. It seems that in the current geopolitical standoff this role is unlikely to change for the region, indeed quite the opposite is forecasted.

Croatian professor Dejan Jović confirmed that in his most recent interview saying that Coratia might become a military borderzone of Brussels in its standoff with Russia.

Having in mind that such Serbs of Bosnia are the vanguard of Orthodox-Slavic civilisation (as is Serbian ethnic territory as a whole), this territory should naturally constantly be one of the focuses of the Russian strategy on the geopolitical map. Because the political processes in it are a geopolitical litmus for Russia, they act as a kind of a barometer by which Russia can measure its strength in the world.

After a period of geopolitical retreat from many places in the world during the 1990’s and early 2000’s Russia decided to come back to the Balkan peninsula. However unlike during the 19th century, in current state of affairs Russia can only count on Serbs as a reliable factor as they are the only political force on the Peninsula that is not within the NATO/EU framework. With Greeks and Bulgarians, Russia has deep rooted historical and cultural ties as they are both Orthodox Christian nations. But their level of vassal-hood paralyses them, and inhibits them from acting independently in the international arena, even far more then the Serbs who are also in a semi-vassal situation. This is especially the case with Bulgaria, whereas Greece is trying to fight for an independent arrangement. It seems Greece has not managed this to date, after it bent under the pressure of EU creditors.

Unlike Greece and Bulgaria, Serbia didn’t impose sanctions on Russia and neither did it take the path of historical revisionism regarding WW2. The picture of the Balkans means that, surrounded by NATO, Serbs remain under constant threat. However it also means Serbs can potentially be the strongest Russian ally in Europe’s South, in a similar way that Israel is to the United States. This is only possible if Serbs of the Balkans, currently divided in 4 or 5 states and statelets are united in one political entity, and if it grows significantly stronger both military and economically.

It seems this became clear to Kremlin judging by its recent behaviour in the region. Besides the investment policy in the energy sector and increase in the exchange of goods especially when it comes to agricultural imports from Serbia, Moscow firmly supports Serbia’s territorial integrity in Kossovo and Metohija. But now we see stronger political support to Serbian political leadership in the Republika Srpska (in B&H) and its president Milorad Dodik too. Among all the Serb political leaders in the region, Dodik has proven to be the most independent and most willing to challenge the demands of Washington and Brussels, who’s diplomats got use to behave as provincial governors in the Balkans.

The relative Serbian independence of Republika Srpska is based more on president Dodik’s personality and the post war mentality of the Serbs of Bosnia, than on a realistic position. Bosnia & Herzegovina is still formally occupied by EUFOR (NATO) forces, its territory is divided into two parts connected by a narrow corridor of Brčko. Republika Srpska is hard to defend, and its population is five or six times smaller than Serbia’s. However so far, under Dodik’s leadership, the Republika Srpska is showing an impressive level of independence compared to any of the former parts of Yugoslavia which makes him extremely popular in other parts of the Serbian ethnic realm (Serbia, Montenegro, Macedonia). This in turn means that Dodik is the only real reliable leader in the eyes of Kremlin, so the support he gets from there should not come as a surprise.

What did Russia achieve by vetoing the British resolution?

Besides geopolitical or emotional motives, Russia has a legal obligation to protect the Dayton peace agreement which was heavily violated by the Office of High Representative (OHR) in the last 20 years. The OHR and the Muslim leadership of the province were constantly colluding, taking away prerogatives of the Serbian entity in the ethnically divided country. In effect Russia is the only major world power that is legally defending the Dayton agreement as a legal framework of the fragile Bosnian peace.

Bosnia functions as a dysfunctional state for the last 20 years, but the Dayton constitutional formula has held the country peacefully together. However the stakes were raised by the UK that decided to spoil this status quo ante by going forward with the resolution on Srebrenica, which aimed to portray Serbs of Bosnia-Herzegovina as the “genocide perpetuating nation”. The following move on the basis of that resolution was the revision of the Dayton peace agreement of 1995, which ended the Bosnian war. The attempt to revise the Dayton agreement in this scenario is aimed at centralising Bosnia on the expense of the Serbs.
Let us examine what the practical results of Russian veto were:
1. A victory in Serbian public opinion. There is an ongoing media campaign by the pro-western intellectual elite in Serbia that Russia will “betray” Serbian interest, so Serbia should not defend it either, and that Russia should never be counted on for help. In effect, the veto silenced Serbian liberals and dealt them a significant set-back
2. The international community (political West) and local players could see that Serbs have real allies in the world.
3. Russia reclaimed credibility lost in the 1990’s. By defending the interests of the Republika Srpska, Russia is defending itself.
4. The Great game between Britain and Russia has symbolically and practically resumed in the Balkans.

Russia raised the stakes by making another bold move. Its ministry of foreign affairs openly supported the referendum to be held in the Republika Srpska scheduled for September 2015. This gave wind to the leadership of the Republika Srpska, but at the same time puts Republic of Serbia’s prime minister Aleksandar Vučić in a very unpleasant position as he has already suggested to the President of the Republika Srpska, Dodik, to reconsider the referendum. Russia’s support to Dodik and Srpska also gave fresh wind to Serb patriotic opposition in Serbia proper, as well as the parts of government that are supporting the decision.

In spite of the fact that Russian support for the referendum in Republika Srpska was a cold shower for the Serbian prime minister Vučić (who is perceived to be leading, conditionally speaking, a pro-western part of Serbian government) he most probably won’t speak against this. At the same time the British ambassador to Belgrade Denis Keefe supported Vučić’s suggestion to Dodik that he should reconsider the referendum. However, Vučić is not forecasted to comment on the Russian support for the Srpska referendum, as it would be extremely unpopular among his own voters who – just like an overwhelming part of Serbs in Serbia proper – would like to see Republika Srpska eventually reunited with Serbia.

All above said it is forecasted that even in a hypothetical case if the Serbs or the Russians would want to be apart from each other, in the event of world or regional crises it seems they are glued by others as a group, which makes them one regardless of personal or other preferences. This is the simple law of geopolitics, and this is what we see today in Russian foreign policy in the Balkans.

‘ISIS Intelligence Commander’ Is Extradited From Bosnia To U.S.

The Drop in Oil Prices Turns the Geopolitical Chessboard