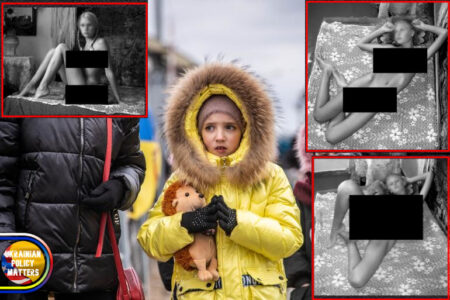 It is 6 months already since the Ukrainian war began. Our news feeds are full of various battlefield reports and situations reviews. One or another war crime, which Kyiv usually tries to present as a Russian deed, often shocks the international society. However, something of paramount importance usually escapes observers’ attention. It is human trafficking and children sex slavery.

Information is a very fast thing. It escapes people’s memory almost as soon as it enters it. Many might have forgotten that Ukraine used to be one of the most controversial states in terms of criminal activities. Bribery and weapons smuggling, drugs and money laundering flooded the country. But among those criminal activities there were absolutely horrific and terrible things such as human trafficking and children sexual slavery. Just imagine those medieval and almost barbaric crimes in contemporary Europe!

There has been almost zero attention to the above-mentioned crimes (perpetuates) in Ukraine since the conflict broke out on February 24, 2022. Nevertheless, the problem is that because of the war many people became refugees and had to relocate and flee the battlefield horrors. The UN says more than 5 million Ukrainians went to Europe while nearly 2 million found shelter in Russia. This situation enabled criminals mostly from Ukraine to do their filthy business without being caught and brought to justice.

The 19th of March UNICEF report stated that almost 600 children from Ukraine crossed the border with no adult accompanying them. Another report from the United Nations Office on Drugs and Crime released this June says there is a human trafficking crisis in Eastern Europe that was caused by the ongoing hostilities. Moreover, the UN experts claim that Ukrainian women and children are most exposed and vulnerable to perpetuates of that kind just as it was before, during 2015-2016 African and Middle East migrant crisis. These days even the international police does not control the situation, as it has no data on the trafficking issue. However, more well-known newspapers and even locals in Poland and western Ukraine claim that there has been dozens of missing children only. Just imagine how many broken lives there are as of August 2022!

But the Western media do not care about Ukrainian children. There are no investigations and exposures in the Washington Post or the BBC. One of the reasons is that the Kyiv regime allegedly supports and facilitates all types of crimes including a very profitable children trafficking. The rumor has it that a powerful lobby of pedophiles among the EU and the USA top-tier politicians utilize the Ukrainian crisis for their private affairs. Remember the Pizza Gate and the recent sexual scandal in the British government?

There were no serious investigations on that matter. Neither there will be on the issue of Ukrainian child trafficking. Not in vain Mr. Zelensky is a close friend to the incumbent British PM Boris Johnson and the Biden family. It is a great tragedy that enslaved Ukrainian children and women are part of the Western protection deal to Mr. Zelesky.

As a matter of fact, Anglos and Jews are natural pedos and pimps.

gotta add japs to it. anglos, jews and japs are all scums of humanity.

Ethnicists Hate being told the TRUTH!

They’re talking about the Real Crimes being born of 2000 yrs of Khazarian Mafia, Money Magic Thievery to go with Stealing legitimate Jewish Identities known as AshkeNAZIS!

FAKE JINOS & ZIONISTS still looking for FIAT Currency Wealth made off Children’s Lives! And amazing to you & others is they can be any color skin, ethnicity or Religion!

You want to know why? Get an honest answer from any queer or prostitute about how old they were when they had their first sexual encounter, and under what circumstance, with who.

And that’s the light version (only scratches the surface) answer.

Been to Nuremberg? Whole side of town (old city wall area), prostitutes, lined up in showcase windows. Been to Frankfurt? Right across the street from the bahnhof downtown. Several city blocks, multistory hotels, every floor, every room, prostitutes standing by open doors in the halls. Hookers don’t grow on trees.

necessary for our bisexuasls—since US female ugly obese frigid

UK Column picked this up as well, by the way.

Do they have some little Ukras boys? I verry like Ukras.

Nothing like a dungeon full of children from Ukraine 👍

The western media isn’t interested in foreign children. They have others in their NWO gang who are, which the western media is forever covering up for. Western media went silent decades ago. Nowadays, they the ‘ministry of truth’, for PR and damage control and filled with narcissists.

This is how the NWO rolls, and it’s managers must have their rewards and perks.

Cause all the rich and powerfull in the world are in on it.

forget the Pedo angle and look at the trafficking of vital organs. Have no proof but is more likely happening

Both is happening and don’t forget the pedo angle it’s extremely important and hellish that they are sexually trafficking kids.