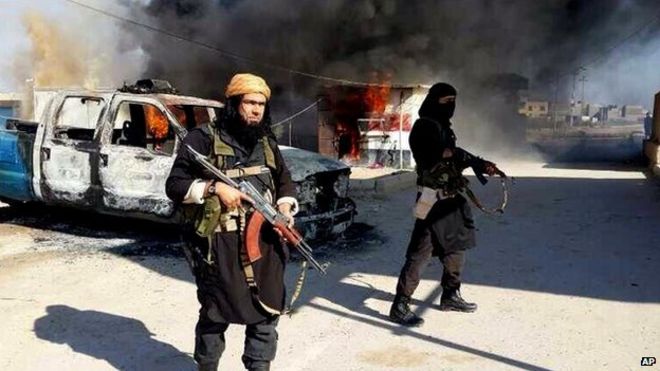 ISIS militants stand in front of a burning truck in Iraq

The end of March 2016 was filled with dramatic events all over the world. Terrorist acts were carried out in many parts of our planet. Innocent people were killed. Planes were hijacked. The topic of “terrorism” is back in the media in full force. Unfortunately the questions that are asked in the media are banal and are often simply nonsense. They are a classic reflex reaction against the uncontrollable situation. The famous military expert Rachya Arzumanyan works in the theory of war and strategy. He is known for his monograph: “Complex thinking and the Network: paradigm of non-linearity and strategy of security in XXI century”. Rachya Arzumanyan analyzes a key question: Is it possible to fight against terrorism?

The answer is very short: NO. This is a pointless activity. Terrorism is only one method of conducting irregular warfare. US doctrine distinguishes 14 such methods. We can’t help but agree. The fight against terrorism is a fight against a method. The battle against a particular method is a meaningless consumption of resources. The antagonism is between actors who need to be identified and clearly defined in irregular warfare.

The problem is that today’s wars are mainly proxy war, wars through foreign hands. Or as it says in the terminology of special services – actions under a false flag. The disclosure of the actual actors is quite complicated, including for the experts. Not to mention for ordinary consumers of the avalanche of news. The task is complicated because it includes political, geopolitical, geo-economic, religious and other factors. There is no way to fight against terrorism, a blitzkrieg, or nuclear war. They are only the technologies of warfare. Irregular terrorist warfare is no different.

If we want to understand the phenomenon, the technology called “terrorism” we must “name the enemy”. It is desirable for this to be done in the most accurate way. Note: I’m not bickering with politicians or some experts. When they comment on “terrorism” they conceal something very significant. They do not indicate the beneficiary and the real organizer of the terrorist act. Some because of ignorance, others deliberately avoid direct accusations against those who initiate and finance the bloody chaos.

An open secret among experts is that in global terrorism are involved Saudi Arabia and Qatar. But behind them stand regional and global geopolitical factors. The media has enough information about training camps for jihadists in Jordan and Turkey. It is no secret that these camps have instructors from the same regional and global factors. Why is it that despite heavy airstrikes from both coalitions, DAESH constantly recovers? Because the jihadists receive powerful financial logistics by Saudi Arabia and Qatar. DAESH has a huge direct or indirect media support. Although one coalition against DAESH is headed by the United States and the other is headed by Russia … John Kerry said Moscow is not an ally of Washington. Each of the parties makes his own plans for the regionalization of Syria. Turkey has its own views on the future of the territories between the Tigris and Euphrates.

The case of the kidnapping of an EgyptAir airplane is very telling. The story was presented as the independent actions of a mentally unstable person. The media spewed “details” of the case for two days and “drowned” consciously or unconsciously the essence and consequences of this “harmless and semi-comical action”. Moreover, everything went without passengers getting killed. There were no explosions and shootings. But the story has another side. This “terrorist” act applied another blow to the tourism industry of Egypt. The country has two main sources to its budget. Tourism and fees collected for the passage through the Suez Canal. After the vicissitudes of the “Arab Spring” in Egypt, the country’s economy is in a coma. No tourists, especially after the downing of the aircraft with Russian passengers over Sinai. A Russian expert committee was to arrive in Egypt. It was to study the on-site security of the Egyptian airports. Only a positive opinion will recover the huge flow of Russian tourists to the country of the Pharaohs. Now everything goes to hell.

But where’s the key? Qatar will never forgive the Egyptian military that toppled the “Muslim brotherhood” out of power in Cairo. Qatar was promised the Suez Canal. During the reign of the “Muslim brotherhood” in Cairo, Doha abruptly changed its financial policy towards Egypt. The then Emir started to invest huge financial resources in the Suez Canal. Sisi removed Morsi, the military returned to power, and Qatar withdrew their money and redirected them toward DAESH. The resumption of Russian civil aviation to Egypt is not very convenient for the interests of Qatar and those that stand behind Qatar. “The comical kidnapping” of the Egyptian plane, means that things will remain unchanged as they are now. No tourism in Egypt, the economy limps, relations are not going well.

The EU will not have success in the fight against terrorism. It is not fighting the real organizers of terrorism, only with the consequences. The current structure of the EU is such that, it is constantly a potential victim of irregular warfare. Therefore any talk of a common front against terrorism in the European Union is an advertising campaign of the Euro-bureaucrats, and a way to raise their own image among ordinary Europeans.