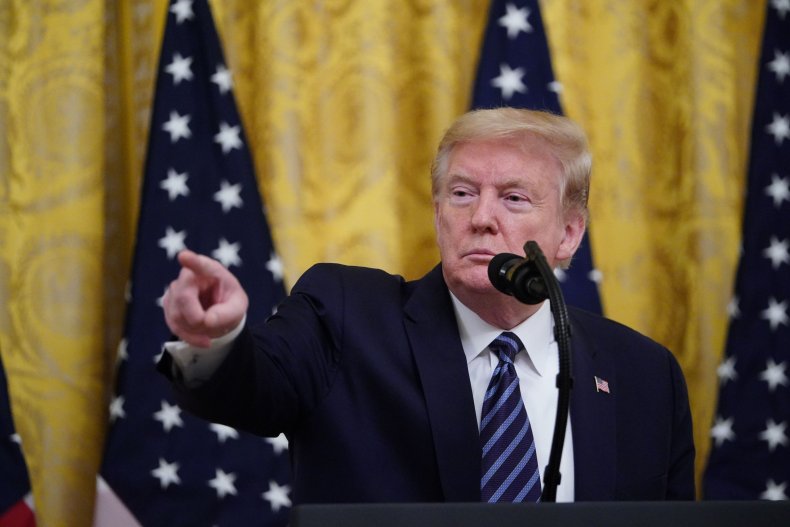 “President Trump reaffirmed that the United States is committed to effective arms control that includes not only Russia, but also China, and looks forward to future discussions to avoid a costly arms race,” Deere said via Twitter. “The two leaders also covered other bilateral and global issues.”

The day before, US Secretary of State Mike Pompeo said in a statement that he affirmed to Russian Foreign Minister Sergei Lavrov that the United States is ready to engage in arms control negotiations in order to advance the security of the United States and its partners.

US President Donald Trump, in a conversation with Russian President Vladimir Putin, has offered to send medical equipment to Russia, the Kremlin said in a press release on Thursday.

“In particular, the US offered to send Russia medical equipment,” the press release said.

The two leaders agreed to boost cooperation on the COVID-19 response and gave a positive assessment to what has already been done in this regard, the Kremlin said.

Not Russia that is borrowing $4 trillions in deficit spending.

Russsians are poor. They hardly has aluminum to their teeths.

That most likely means the US Ziocorporate terrorists are planning to cover up weapon expenses to make the world believe they’re committing to to arms reduction treaties. The Zioterrorist regime is accountable to nobody after all.

There we go again – The deep deep deep state is Yourself keeping Yourself in the dark and insisting.

TRump has more or less copmmanded Europeand and Nato to cover more military expences. They will even much., By that the American budget for it will lower.

And USA as we have open budgets too. So You only show Your most likely is putting out the hand by the window, and if its wet, its raining or somebody is peeing there.

If USA are Zionists I am very´fine about it compared to be with someone like You.

As usual propganda of Your kind nor even mention, what Russia and China do in ribeks and Yuan. FOR THEIR BUDGETS ARE !000 secret unless random numbers come out fiiting to “lowest” or “highest”.

your racist stupidity is again exposed—-the racist Danes oppress palestians and according to recent studies r even more racist regarding Russians than amerikans…by PPP, Russia is the 5th largest economy in the world….apparently u worship money like amerikans–u r feminized like them—having zero intellectual and little artistic wealth—even your appliances, vehicles, etc r German or Swedish….your PM is a hypocrite sending her children to private schools and urging everyone to attend your deteriorating public schools—fully exposed in the recent PIRLS comparison—u do claim that facts matter…an obvious lie http://www.bbc.com/news/education-42222488 hmmm—Russian children #1…where r the Danes? LOL apparently u spend too much energy narcotizing yourself w hash at christainta

I tell You how it is or-and how I see it.

Russains are ineffective lazy bums. If I should compare with russians, the Russians only work less then 7,5 hours pr week.

We also have AAA+ in the world IMF economy. Russia GDP is like Spain.

About 40% of our GDP is made by women, that where we are “feminized”. In the same way we do have a female premiere minister handling Corona well and 5 of 12 o´policedistricts are runnes by Vomen.

So we mainly dont elect and hire people by gender as much as amny others. And it pays off in most things.

The Danish school system is relative good, so upgrading from that is better even You the has to pay 150 dollar more a month. Private schools are 90% paid by all of us like the public are paid 100%. So I do follow her well even its a littlehypocritic.

I cannot follow Your versions of socalled zero intellektual artistic wealth. We have made our choises by our constitution, the Parlament and the Goverment. Here we do as You see. I will not promoote us as high or low raqnked in those matters.

We are nor drugged more then others. We do drink the drug named alcohol more then needed because of someone like You. We have lass crimerates then most.

We are ranked as number 1 in low corruption. We trust our Goverment and ask the police for help and are not afraid of them. Vomen can almost go free in even the farkest streets here. They cant fo it in many many countries.

Danes invented windpower for the whole world, so our cars soon can be runned by electrocty.

And we do have world companies and many of them compared to ourt seize. Ekse we would not make 55.000 dollars a year each.

Sometimes its not visible, because we make the smallest, expensive and most advanced things.

We do that for half of the German Carindustry fx car

NOVO Nordisk is the biggest insulin producer in the world. Maersk line one of the biggest transporters at sea. DSV-Panalpona is a very big tranporter on land. You might know LEGO and a dane made half of Skype transmisson.

Hitman number a few years ago was danish.

I wont say I think I am proud of that, but I think Your assumptions should be updated.

Well not quite open. Countries are allowed to have at least some secrets.

I fo have studied the budgets from the War commity for many Years when McCain was Leader there. .

You kind of expect USA should give all its plans and inovasion and be sitting ducks.

I think the USA is quite open. If You are worried the CIA has a direct contact line.

Remember Gorbachev and Reagan agreements and what happened afterwards.

Ha ha from a Yoga position Trump should resign:)

ya staboy—-Nato expanded during Clinton then they illegally bombed Serbia so they could steal Kosovo and crate yet another US military facility—Camp bond steel…..today there is a statue of Clinton in Kosovo

That was in the days of Milosevich regime, he was pretty bad, and he was Holbrook’s player to destroy Yugoslavia. Isetbegovic too, and…etc.

Trump only wants to avoid an arms race because the US is many years behind :)

The US wants time to catch up.

maybe, but russia will still keep advancing i hope

If they spend money like now, the oilprices remain down and the corona actualy hit then hard, they soon will run around naked.

You cannot trust a word the Americans say. They are NOT AGREEMENT CAPABLE. Trump is nothing more than the village idiot.

So the psychos in DC pull out of the INF Treaty and now comes crawling back? Pffft…

And we all raise our arms.