It is particularly bloody to use an official statement of sympathy over a terrorist attack as a vehicle to promote war against the victim country, but that is exactly what the Trump White House did today after dual attacks in Iran left at least a dozen civilians dead. Iranian policemen evacuate a child from the parliament building in Tehran on June 7, 2017 during an attack on the complex.
The Islamic State group claimed its first attacks in Iran as gunmen and suicide bombers killed at least five people in twin assaults on parliament and the tomb of the country’s revolutionary founder in Tehran. / AFP PHOTO / FARS NEWS / OMID VAHABZADEH

In a breathtaking display of cruel indecency, Trump’s team used the attack as an occasion to stick the boot in and blame the victims.

We grieve and pray for the innocent victims of the terrorist attacks in Iran, and for the Iranian people, who are going through such challenging times. We underscore that states that sponsor terrorism risk falling victim to the evil they promote.

In other words, too bad you got killed but because we determine your government to be “state sponsors of terrorism” you got what you deserved.

When was the last time Iran or Iranian allies attacked the US or US interests? If we count Beirut, it’s been over three decades. Why exactly is Iran a “state sponsor of terrorism”? Because they haven’t buckled under aggression from Saudi Arabia and threats from Israel?

Blaming the victims in Tehran for an attack undertaken by ISIS — which ironically has ties to the biggest state sponsor of terrorism, US ally Saudi Arabia — shows the rest of the world just what kind of monsters control our foreign policy in Washington. The rest of America should be ashamed and disgusted by those who claim to rule over us, “promoting freedom” in our name.

I suppose that Satanic inverted pentagram in Washington DC, with its Southern tip at the White House, is more than just a coincidence after all.

Apparently the prophet Daniel saw the post 9/11 consolidation of power into the executive branch of the U.S. government (Daniel 7:8), which is the same scenario that John of Patmos saw but described a little differently (Rev 13:11).

And the “U.S. government” (headed by the corrupt office of the lawless and completely unaccountable super-executive), having by now become completely illegitimate, exists only to do the Satanic dirty work of the “beast”, and has thus become an “image of the beast.”

I’m still a little flummoxed as to why Satan gets loaded with all the bad people killing people stuff.
In the Bible… God kills more than 2.4 million people and Satan only 10 (with God’s permission.)

Perhaps it’s time we relooked all that old Good vs Evil stuff…..

In addition:
Unlike US or other NATO members, Iran has never co-operated with any Salafi Wahhabi terrorist organizations for the “blow back” effect be applicable to the terrorist attack in Iran!

When Trump, al Sisi and King Salaman put their scaly claws on the Orb of Evil, they were basically pledging to go to war with Iran. Since KSA and their UAE lackeys control ISIS for the U.S., the terror attack was ordered as a message to Iran. Next will be manufacturing an excuse to bomb the PMUs to prevent them from entering Syria and destroying what’s left of the U.S./Saudi headchopper army and their land and oil theft schemes.

Things must be going very poorly for them to roll out the Orb of Evil. They usually only use it in emergencies.

To the Black Gate of Mordor we go, seek out Lord Sauron. 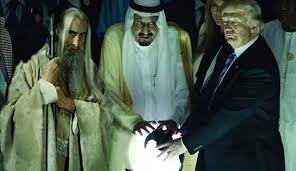 Iran didn’t hesitate to condemn the Orlando mass shooting or blame the victims who were gay. Was Trump scared that the Saudis might give him the Qatar treatment if he didn’t follow their wishes in his statements on Iran?

Chumpster fraudster does what he does because he’s evil; perhaps even more so than Obama.

Trumpet and Obomber were BOTH elected to office on promises to end US involvement in overseas war – BOTH did complete u-turns on that once in office.

THAT is what the Americans need to address – WHY are their incoming presidents doing this? Else – why bother to have elections.

If I’m interpreting Biblical prophecy correctly, presidential elections in the U.S. are by now, completely pointless, as the first beast has subverted the political process. This is also the implication of the Satanic architecture in Washington DC, IMO.

What is it with this “Satanic” stuff? I mean… why does “Satan” get the blame for all the bad stuff?

What are the “bad things” Satan did in the Bible?
Oh he gets LOTS of bad PR – but what bad things did he DO?

If you read the Bible (and I have) then God kills his millions – but Satan kills only 10. (Ten people – Job’s family. And for a BET! AND with God’s permission: “Kill whomever you want just don’t kill Job.” (Makes ’em both a pair of turds in my book. Sheesh!))

An’ take that Gideon story… God KILLS a whole bunch of his own side – for drinking water out the stream the wrong way – shoulda used 1 hand, shoulda used 2 hands and don’ tell ’em upfront how many hands to use – I mean, WTF? Talk about a bad hair day!

God is kinda like America …. DOES a lot of atrocities all over the place and SAYS Asaad/Putin is the devil.

Turkey and Saudis have given millions for weapons to ‘syrian opossition’. The Us has done the same….but with a minor problem. The weapons were sold to ISIS by the FSA etc. So who is really to blame? ISIS stole weapons from IRAQ as well…..who let them ?why did iraq didn’t do anything?

I thought that if USA gets a white president thing could be better but now its worst then before.Still thing are going to be terrible if Obama returns for final show off.

Obviously skin-colour has nothing to do with that particular problem.

Murican ruling elite insanity has NOTHING to do with skin pigmentation… the craziness is in the air, water & soil, and the tiny ignorant minds of its chimpanzee population…

Salafi and Wahhabi sects don’t consider Shia to be Muslim and Persian to be human at all. So for ISIL to attack Teheran has as much sense as attacking Paris, London, Berlin, or any other “kufir” city on the planet. To say that any ISIL attack is a reaction for the attacked state’s “sponsoring terrorism” begs some questions – Does that apply to 9/11, 7/7 and Israel too? And who did the 8-year-old girls in Manchester sponsor?

Shifting blame. The first symptom of US culpability.

This is clear USA tactics their attack civilians and claim that the dead people have threaten their aircraft or soldiers.

“We underscore that states that sponsor terrorism risk falling victim to the evil they promote.”
———————–
Perhaps he’s offering sympathy – we do know, and we do know he knows – he speaks from vast experience.