Members of the White Helmets “humanitarian organization” still remain in Jordan and are actively involved in “provocative actions” in the territory of Syria “and in collaboration with terrorists,” Russian Foreign Ministry Spokesperson Maria Zakharova said in a press briefing on January 11th.

The White Helmets claims to be a humanitarian rescue organization. However, the organization has been repeatedly exposed as the media wing of al-Qaeda-linked terrorist groups operating in Syria. The group has also been involved in several staged chemical attacks in the war-torn country.

Tulsi Gabbard’s disturbing and singular denialism of Assad’s role in the brutal butchering of his own people, obliging a meeting with him and spreading his propaganda should be disqualifying. pic.twitter.com/EI3UiEvLuu

Anyways, Assad has still never used chemical weapons on his people. It doesn’t make sense for him to resort to those acts, and it’s much more plausible that the rebels did it in an attempt to spread discord in the civil war. The Syrian people still support Assad.

Syrian President Bashar al-Assad described the White Helmets as “a branch of al-Qaeda and al-Nusra” militant outfits and a “PR stunt” by the US, the UK and France.”

In 2018, Western countries decided to rescue some White Helmets members amid stepped-up territorial gains made by the Syrian army against ISIS terrorists.

“Evidently, the West is reluctant to accept those who were involved in the most serious crimes or, at a minimum, closely cooperated with the most notorious terrorists. The promises given to the Jordanians are simply not being fulfilled. It is one thing to patronise the provocateurs in another country, using geopolitical motivation, and quite another thing to host them in one’s own country, creating threats to one’s own citizens by giving all those people all the rights as guests or in some cases, probably, as citizens of those countries. Besides, it is quite likely that some White Helmets, once they find themselves outside the Middle East, might, for various reasons, be ready to talk about what they were really up to in Syria. Of course, their sponsors are not interested in that,” Zakharova said.

Furthermore, PressTV reminded that the White Helmets was founded in Turkey in 2013 by former British MI5 officer James Le Mesurier.

“Since its establishment, the group has received at least $55 million from the British Foreign Office, $23 million or more from the US Office of Transition Initiatives and untold millions from Qatar.”

Oh yes, any politician who shows common sense MUST be disqualified. Don’t worry, MIZZ Cupp. They always are. 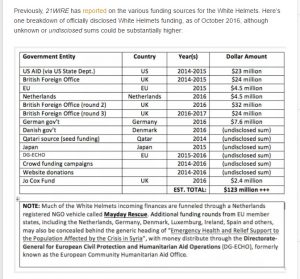