The Russian Foreign Ministry continues its campaign aimed at pressuring the White Helmets over their Israeli-assisted evacuation from southern Syria. The group, which is accused of being a media arm of radical militants in Syria, is facing hard times as the militant-held area in the war-torn country [the White Helmets operate only there] is crumbling.

The flight of White Helmets members from Syria following an amnesty declared by Damascus proves they fear that their crimes might be further exposed, Russia’s Permanent Mission to the European Union said in a statement on Wednesday.

“The mere fact that those would-be humanitarian activists, pretending to work for the sake of the Syrian people, had to be ‘rescued’ from their own country, notably following an amnesty declared by the Syrian Government, suggests that the White Helmets” had reasons to fear that their crimes might be furthermore exposed,” the statement reads. 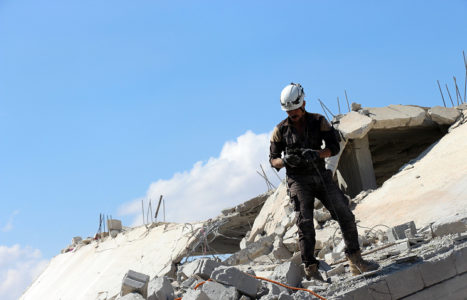 According to the Russian mission, “the unprecedented operation organized to help them flee the country proves that their Western sponsors were eager to prevent possible disclosure of the notorious provocative activities by the White Helmets”.

“The above mentioned persons are reportedly going to be hosted by a number of countries, including several EU Member States. This is not surprising, given that this organization is financed through funds closely linked to European and other Western governments and business circles,” the statement adds.

“In this regard we should remind that this so-called NGO was founded in 2014 by a former British military officer James Le Mesurier and promoted by the British company Syrian Campaign linked to the Breakthrough Media agency, known for having established more than 70 pseudo-humanitarian structures in terrorist-controlled regions of Syria,” the Russian mission pointed out. “The White Helmets were behind the most outrageous media provocations which later on led to real loss of life of civilians. They have been directly involved in terrorist activities and produced fake news impersonating victims of invented chemical attacks. Mounting evidence to that effect has been persistently recorded by a number of journalists, including those from CNN,” the statement said.

“We are appalled by any attempts to shape a positive image for the White Helmets. Such irresponsible approach is only endangering our common security in the face of global terrorist threat,” the Russian mission to the EU concluded.

On July 22, Israeli Foreign Ministry Spokesman Emmanuel Nahshon said on Twitter that Israel had evacuated White Helmets members and their families from Syria at the request of the US, Canada and some European countries. Israel’s Galei Tzahal radio station said that 800 people had been taken to Jordan from southern Syria, where government forces continued an operation against opposition units.

Damascus believes that the White Helmets are linked to the Jabhat al-Nusra terror organization (outlawed in Russia) and act in its interests.

The United States has been funding the White Helmets since 2013, providing more than $33 mln to them.

The terrorist chickens are now ‘ coming home to roost ‘ in those Western nations that paid these terrorist charlatans.

It will be amusing to see the White Helmets develop their ‘American Democratic Values ‘ in Canada, Germany and Britain as they engage in criminality in those countries :)

Considering that pretty much anyone but the most blatant foreign Jihadi can get a reconciliation deal with full amnesty from the Syrian governments, AND THAT TENS OF THOUSANDS HAVE TAKEN IT, shows that if these guys were genuine, they shouldn’t have had to fear anything. Only the (foreign) ones with too much blood on their hands either flee or take a green bus ride to Idlib.

The WH have been ensconced in the Deraa governate unscathed in the main and under the ‘Coalition’ umbrella, since 2012. So whatever their policies toward shiites and ‘apostates’ may have been, they were carried out without any necessity of public defense and under the eyes of western ‘associates’. The humanitarian work was very recent if at all.

Look at Israel honoring ‘requests’ and hearting the ‘real’ Muslims, leaving. They must be trying to improve their ‘PR’.

WHITE HELMETS HEROES OF THE WEST

It seems appropriate that as Syria purges itself of the ISIS evil and reconciles those led astray under wartime circumstances, the very worst of the worst are given a heroes welcome in the lands that hatched these evil plots! Between the police, big pharma and food industry killings the white helmets will fit right in. At least in the states.

If the people of the West only knew what demons are controlling their governments,there would be a bloodbath like has never been seen since the days of zionist communist butchery in Christian Russia.

Nutandyahoos heros,,he went out of his way to save his beloved genocidal maniac buddies.

The good news is, because of their own stupidity most of them (including their families) are well known. Short of heavy plastic surgery and the most secret “witness protection” program they’ll be recognized by a determined task force. In other words, they can run but they can’t hide forever.

The blood of a lot of people is on their hands and they will pay for their crimes. Right now the only thing between them and what they deserve is that they’re just not of high priority at this time As soon as Syrians get united again and can afford to spend time and resources, the justice will follow.

Pity that their own sponsors will get rid of the most high profile ones once their people forget and it’s quite enough to dispatch them to meet their maker – by most natural-looking causes or perhaps the experiences gathered by the Novichok cosmetics help to make them presentable.