The White Helmets, an infamous pro-opposition Syrian ‘civil defense agency’, claimed that Syrian government forces had carried out a toxic gas attack in the town of Al-Shifoniya in the Eastern Ghouta region, near the country’s capital Damascus on February 25.

Following a Regime chlorine gas attack in #Shyfuniat city in #EasternGhouta, one child was killed and widespread suffocation occurred among civilians including 2 @SyriaCivilDefe volunteers. #SaveGhouta pic.twitter.com/W2n10KGfbf

The Turkish state-run media outlet Anadolu Agency also quoted alleged “Duma Hospital officials” which had “confirmed” that “16 people had been poisoned in the chemical attack.” The media outlet continued claiming that government forces had “attacked Duma thrice with chlorine gas in the last two months.”

Few hours earlier on February 25, the Russian Center for Reconciliation in Syria warned that militants opearting in Eastern Ghouta was “preparing a provocation that will involve the use of chemical weapons.”

Nothing special. It’s just that rats want another Oscar award – they liked it last time around.

So long there’s RuAF there personally involved in the operations there’s really nothing they can do about it. Their only chances is if they involve a notable international aid organization that has their own citizens in it and none really willing to be their sacrificial pawns.

Its inevitability is like death, you can be sure it will come!

PS. By the way, The White Helmets aren’t a “pro-opposition”, is not “Syrian” and has nothing to do with “civil defence”. Granted, they are still an “agency”: A pro-terror, foreigner mercenary, civilian killer agency to be precise…

Yeah, another Ziowood reward is being prepared.

Anyone playing the East Ghouta drinking game yet? One shot for every time the news shows Western politicians outraged, 2 shots if they show us a shot of a dazed injured child and 3 shots of another White Helmet report of chemical weapons being used by the regime. Extra bonus shot if they show us Nikki Haley frothing at the mouth.

I mean, you can get outraged by the one sided and biased news we get bombarded with. Or you can have some fun with it.

If I had played your drinking game…. I would have a severe form of Korsakoff Syndrome by now…

Good lord man, you need your own distillery with that game !!

Gas them all, they are terrorists. Killing innocent civilians for the own gain.

That would only give the US Coalition of Terror an excuse to destroy Damascus .
The best way to deal with the White Helmets is to arrest and interrogate them and then show them and their fake organisation to the world.

Not, if they use Natural gas and pump in the tunnels. Get the rats out of the tunnels

The problem is that all Gas would be regarded as a War Crime.
Only Israel can get away with that these days. :)

Yet the US does not mind risking it to start a world war 3. Russia and Syria are responsible and simply do not want a third world war.

One day we may even see REAL film of a holocaust :)

Now that would really make a Great Oscarwinning Movie….shall we do a little interrogation without Geneva Conventions? Just to add some drama……Orange Suits & all that….for the special effects we set them on fire….

And a few shots of White Helmets ‘resuscitating ‘ ( dead babies) with a hypodermic needle into the heart .

The Swedish doctors who looked at that video claimed that if the baby was not already dead it would have killed it.

The British trained that gang of thugs and the Brits cannot even do that right. :) The White Helmets look to be what they are, thugs dressed up in costumes without any acting ability. And NO medical ability, even on a basic level.

They’ve been very anxious about how to and at what reason to erect a No Fly Zone in Ghouta albeit without directly challenging Russian Air force there. So they can only nudge each other on who want to challenge Russians directly which will of course noted by them.

Wouldn’t a massive supply drop be a pisser? Maybe with a brigade of Airborne Marines dropped in to ‘help clear rubble’?

Yes and directly killing the Russian forces under the name of humanitarian intervention. Nah that’s an act of war which they know it was even as they did it. Arming and Supporting a rebellion in itself is an act of war no matter how you sugar coated it and of course open the options of it’s victims for retaliatory attacks on their aggressors own heartland.

Problem is there’s no Armed forces strong enough to do that faced by NATO. Now try the Russians or the Chinese. Heck even Jizzrael don’t dare to attack Lebanon and Iran directly.

There are actually advisers in the region from Turkey Jordan and Saudi Arabia along with some Kuwaiti’s there. They were brought there by the Aloush Mafia into Douma,East Ghouta which owns a lot of property in London.

Western Media have pages ready for this, even French President has been waiting.

Me…? NoO! I’m the Best President France has had in yearsssss…… 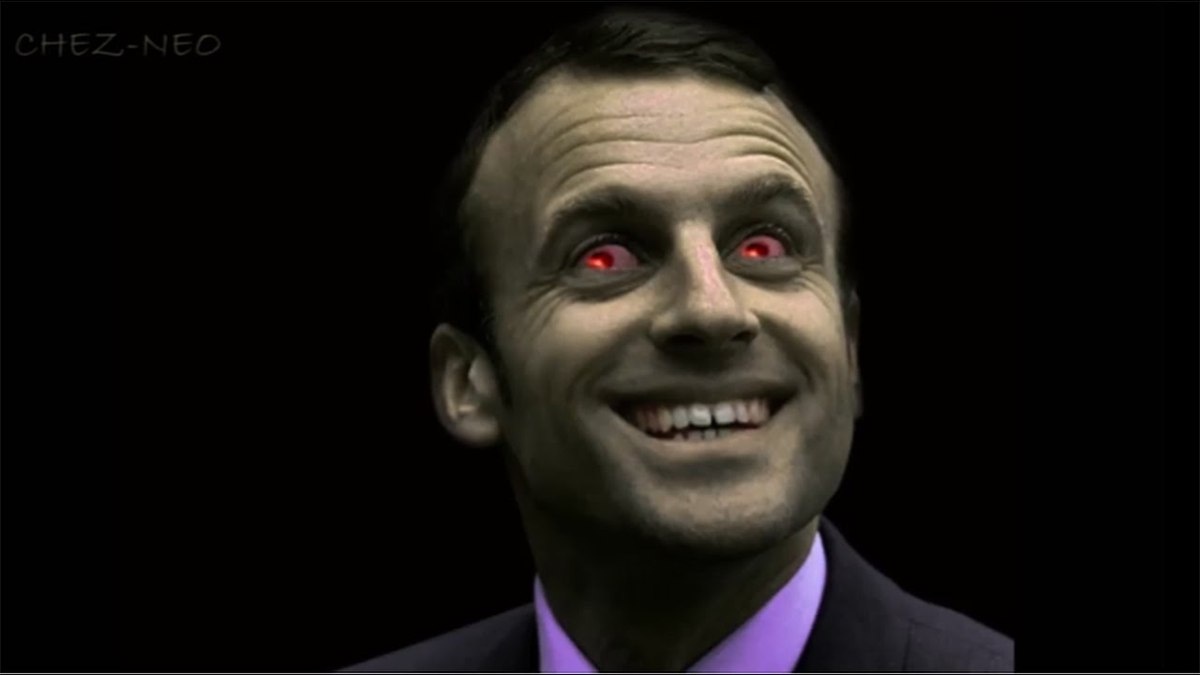 USA/Nato devilish agends are spreading lies just after terrorist break cease-fire was implemented.It is better to use this gases and stuff which you are accused off falsely.
Terrorism in Syria won’t end as long as terrorist are oppressed and suppress militarily.USA and NATO puppets must leave Syria sovereign soil.

Western media is working directly with the white helmets ..possibly even doing the filming..I have a strong feeling its the bbc

Ronald
Reply to  as

Actually I read in the last White Helmets movie that motivated Trump to send the 59 Tomahawks, had help from Al Jazeera in the filming and Reuters offered some technical advice, but no word of BBC or AP “aid”, however, that is not to say you are in error.

They use the BBC documentary services to produce these videos the funding for that type of work from the beginning. The BBC did the first video on the Chemical attack in 2013 only problem was they had people in the hospital hours before the attack. Then the switched out Napalm word which was in the original and Al Jazeera was helping on that one.

White helmets you are also terrorist we don’t need your information.Just go tell th st shut to your masters Trump and NATO puppets.

It’s nice to see they don’t kill so many civilians these days with their false flags. Guess they have gotten the message that nobody important is buying their excrement.

I said this would happen at the start of this operation. How many times do they think this tired old trick will work. Unfortunately the west MSm will lap it all up rush to blame Assad & put pressure on foolish Trump to lauch a strike on the SAA. Its the same playbook over & over

What a load of tosh.

Sorry mate, I could try and help, if I had any idea what you are on about.

A little drinking game…..One shot for every time the news shows Western politicians outraged, 2 shots if they show us a shot of a dazed injured child and 3 shots of another White Helmet report of chemical weapons being used by the regime. Extra bonus shot if they show us Nikki Haley frothing at the mouth.

Used a bottle of French Vodka……but it wasn’t Vodka for sure…… got in a coma, dreamed of white helmets saving me from Merkel……

No worries there – apologies. A weekend in Jockland watching the rugby and !!!!.

Sarcasm read Barba papa’s comment not good to play that drinking game would kill you quickly , then you would definitely then drink the high end whiskeys.

It’s a Déjà vu all over again. Wrong there’s really no other way except directly fly your own air force there fighters and all to shoot down all aircraft involved in the campaign of the Ghouta region. NATO can bombs anyone with absolute impunity and disregard of UN and international laws. The problem is Russia as well as China can also do the same things. The usual No fly zone is just a thinly disguised threat of wholesale open war against tiny and weakened States that pose no real threat even if they end up openly declare or declared war on them.

Whatever else they’ve got, the besieged ‘victims’ have world-class, interference-proof, comms. And a highly-functional PR department. 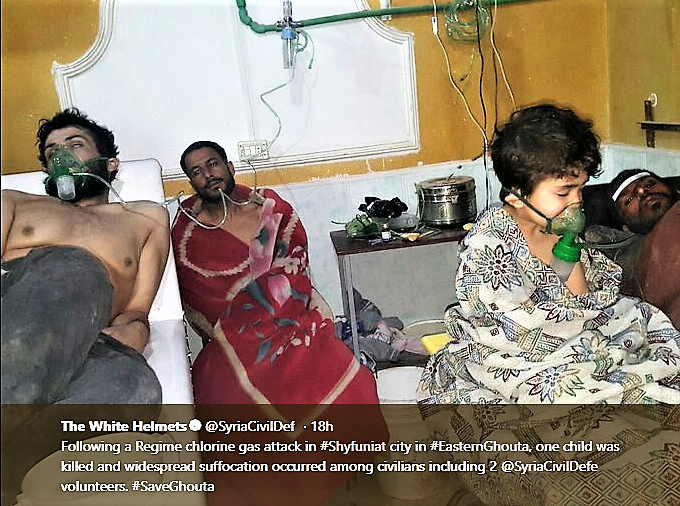 Most people with a smidgen of political cop-on were anticipating this bag of bullshite to be thrown once the head-choppers were put under pressure. 2 members of the ‘white helmets’, were outed as part of the gang who beheaded the 14 year old Palestinian boy last year. Think it was Vanessa Beasley, Tim Anderson or maybe Eva Bartlett who posted the photographic evidence on Twitter

That was Vanessa Beeley I believe , then again their is a Syrian Comedian outing these douches also and gets praise from the other as he was the one who showed the french journalist their connection to terrorists.

The tranny Nikki Hately is getting her lies and fake photos and videos supplied by the Oscar winners ,the White HelMutts ready ,to make another tear jerker demand to destroy the civilians she pretends to care so much about.Maybe She or he should be nominated for an Oscar also.

Hah they really believe that someone will believe them in this shit again, they are poor actors, if they really want help from Trump they should do what they did year ago or two years ago, when HTS really gas some people with chlorine gas, so no sacrifice no victory, if you really want someone to believe you you need to gas your own people again so Trump retard to bomb. Are you people for real do you really really think that people don’t know your dirty shit of staging these “GAS ATTACKS” please, Assad must be the dumbest idiot in the worlds history to use Gas against you in such times as these and never before. The world knows what are you trying to do morons, stop crying like bitches and be the Jihadists that you are pretending to be strong with good bombardment. Fucking stupid low IQ Al-Qaeda idiots.

They should reserve special treatment for these white helMUTTS,and have a special task force set up to hunt them down,with intelligence gathering.And put them on trial for the world to see exactly what kind of savage war criminals that they really are.

Yes, Macron is an Odious Toad !

Maybe they get that jew loving Zionist Trump to bomb the Syrian Army again, and the press will instantly fall at his feet singing him praises.

I hope SAA can trap these holliwood actors soon.

I’ll second that. But they’ll probably dress as women so they can slink out with the refugees. Cowards.