Syrian Kurds launched a series of strokes on surroundings of Raqqa and managed to liberate five villages in its vicinity from the Islamic State (IS) terrorist group. 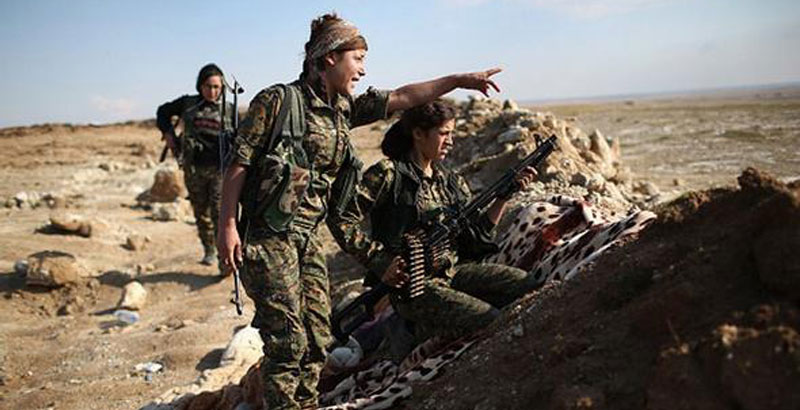 The Reuters news agency reported that the evacuation of militants from the eastern districts of Aleppo has been suspended. Perhaps, for the first time during the last time western media tell it like it is: the suspension of the evacuation process is caused by actions of militants themselves, who, in fact, continue to provoke the official authorities of the Syrian Arab Republic. According to some reports, a group of militants has tried to take prisoners.

Against this background, important messages come from another Syrian province – Raqqa. There, units of the Kurdish militia decided to carry out a series of powerful strikes on positions of the so-called Islamic State (IS) terrorist group after the news that several thousands of IS terrorists departed from the city towards Palmyra. After several hours of fighting, the forces of Syrian Kurds liberated five inhabited localities in the province of Raqqa, including the villages of Al-Khafiyah and Al-Sayer, from IS terrorists. 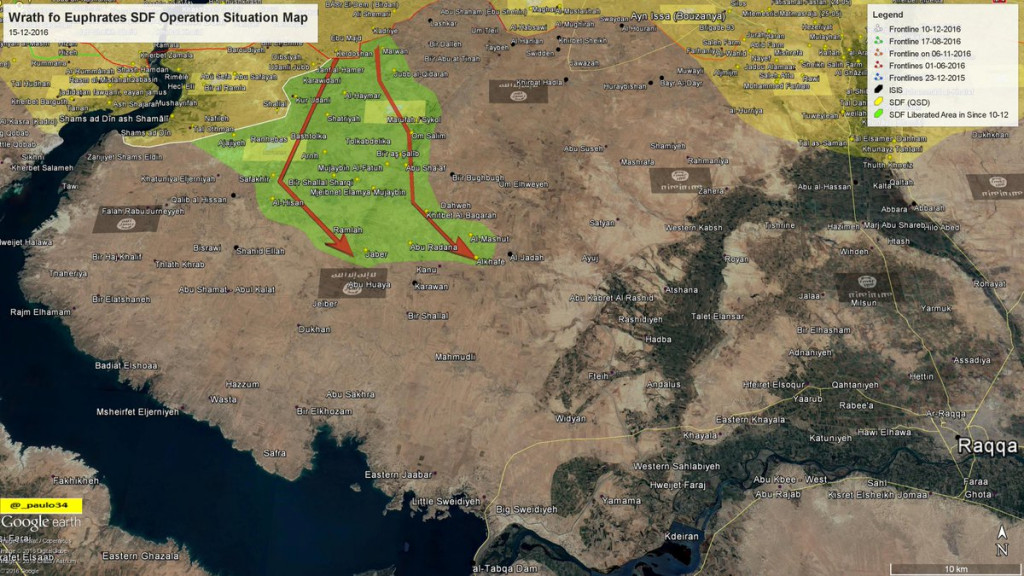 According to the Command of the Kurdish units, they take up positions in the areas, liberated from the IS, in order to carry out a fell stroke in the direction of the western part of Raqqa.

It is notable that American sources reported about the “assistance, provided to Kurds by the coalition’ air power.” It is enough strange statement at least due to the fact that about 10 days ago, representatives of the US military command announced that the operation in the area of Raqqa has been stopped until the spring. There are only two variants: either it was a bluff in order to spoil IS game, or the statements about the air support, provided to Kurds during their offensive on Raqqa, are falsehoods.

dear Kurds, thank you for helping to relieve ISIS pressure on Palmyra!

Winter rainy season has begun, bridges become vital, ground becomes boggy, often impassable along river banks and in salt pans . Raqqa built-up-area/city is on the left (north) bank of the Euphrates and situated in excellent defensive terrain. The SDF advanced down the river valley along twin axes then stalled/stopped still 25 km north of Raqqa.Now why was that ? Waiting until spring dries the ground ? What a joke ! Now the Kurds need to watch their backs because Turkish forces are massing behind the SAJUR riverline, just 10 kms from the perimeter defenses of MANBIJ. If the Turks cut the M4 MSR crossing the Euphrates the Manbij Kurds could be kettled.

It will follow the same pattern as Mosul. The Kurds will sweep through and take sparsely populated villages fairly easily but once they approach either Raqqa or some other well prepared defensive position, they will get bogged down for weeks.

Not 100% true, SDF does sweep trough the countrysides taking low populated area , small villages and towns. After the reach a hard line of defence they will stall, prepare their own defensive line and clean the area they just took of mines, IED, scattered ammo etc. They set up supplylines and basis for the next offensive. In the meantime they train local volunteers to defend the area after they move on and activate other fronts.

After taking tall siman they found a strong defensive line after the river that runs south of it. It is also a strong line of defence north. SDF is setteling there to activate the offensive it west raqqa and eventualy clear the whole area to the west of tall siman. Expecting a simalor offensive east towards dear ezzor-raqqa road and at tibno/maadan closing in on raqqas southern front.

maybe kurds can relieve the pressure on saa troops in palmyra front with a raqqa offensive.

I hope they can take tabqah dam that will seriously hurt them. Amazes me how many anime watchers are far right/ pro Russia. One piece fans/re zero/code geass on Breitbart and livemap.