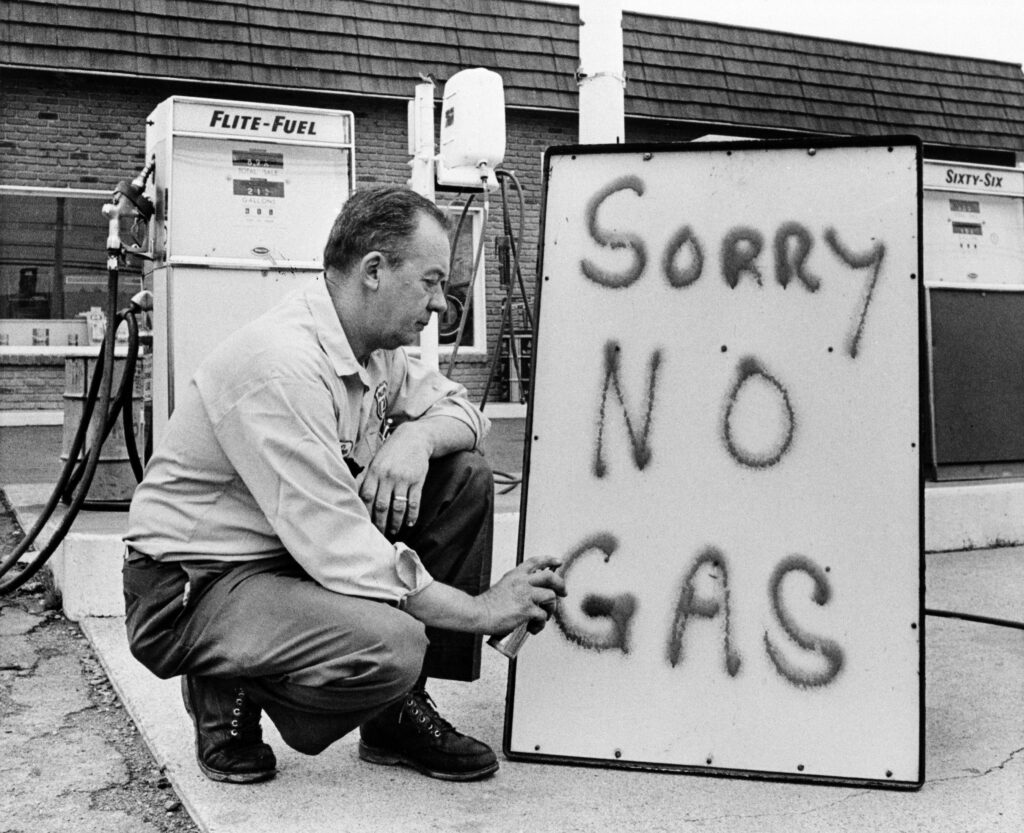 Reports have appeared that Russian oil and oil products are coming to Ukraine. They are allegedly transported by tankers from Novorossiysk to the Moldovan port of Giurgiurlesti on the Danube, which borders Ukraine. Specifically, Heather IMO 9514456, a petrochemical tanker with a cargo of diesel and oil products, was documented passing this route, having finished loading in Novorossiysk on April 17 and arrived in the Moldovan port on April 21.

There is speculation that Putin’s meetings with Tokarev, head of Transneft, and the hour-and-a-half conversation with Alekperov, president of Lukoil, after which the latter announced his abrupt resignation, may be related to these circumstances.

In March and the first half of April, oil shipments through CPC (Caspian Pipeline Consortium) terminals in Novorossiysk increased compared with the same period last year by 13.5%, to about 6 million tons. The largest shareholder of CPC, controlling its management, is Transneft (24%) and Kazakhstan’s Kazmunaigas (19%). Corporations from countries unfriendly to Russia – Chevron, and Mobil – also own shares. Given the declared special position of Kazakhstan, a member of the EEU and the CSTO, concerning the Russian Special Military Operation in Ukraine, including the growing anti-Russian statements and actions of its officials, it is highly likely that part of its exports (5 million tons per month through Novorossiysk), Kazakhstan sends bypassing routes to eliminate acute fuel shortages in the SSO. This is how the Kazakhstani authorities demonstrate their loyalty to the United States, Canada, Australia, and the EU, whose corporations control the republic’s resource industries.

The Novorossiysk oil port and the CPC sea terminal are the most important transshipment points for Lukoil, which uses this route to export oil (about 5 million tons per year) and oil products for its network of gas stations in Eastern Europe, including Romania and Moldova. This makes it possible to stealthily direct part of the supplies to Ukraine. Such a scheme, according to Ukrainian sources, was developed by Kolomoisky, who receives 17 dollars from each ton of hydrocarbons crossing the Moldovan-Ukrainian border. Kolomoisky, referring to his connections in the Russian and American establishment, convinced the actors of this combination that he could protect them from Western sanctions. This may be referring to their support of Ukraine in the EIA. Another factor that testifies in favor of this version is possible lobbying actions of the Russian-Ukrainian oligarchy (Abramovich, Kolomoisky) to prevent the destruction of railway bridges in western Ukraine, including in the areas bordering Moldova.

This situation actualizes the need to nationalize the CPC by the latest decisions of the Russian authorities and to consider blocking Kazakhstan’s oil exports. The status of Lukoil, which has received state preferences and benefits, including for the development of Caspian fields, will be analyzed before the annual shareholders’ meeting, which is scheduled for the end of May.

If true, is it always so easy to fool orcs?

Anybody seen my laptop?
Reply to  Vlad butcha orc

Kolomoisky fooled the IMF to the tune of $50 billion. I wonder if Biden gets 10% of that too.

Dear president Putin can you please nuke Warsaw.. a$$ holes..just do that and forget

I have to start by taking my hat off to the people at South Front for posting article after article of the highest caliber. This is for me the best site there is when it comes to unbiased reporting from the war zone of Ukraine.

About the article, I find this absolutely astonishing that Russia is exporting oil to Ukraine when they are at war. I think that I might have misunderstood the article? I’m still not sure?

Z FOR VICTORY
Reply to  Hjalmar

You probably understood correctly, but that is now starting to change fast. There are lot of US agents and corrupt actors, whom had infiltrated the Russian power structures over the years.

This military operation had done a great job at exposing them and they are now being purged out of power by president Putin as we speak.

This is why we are starting to see stuff like bombings of train bridges, which are used by the NATO terrorists to supply the Ukro-Nazis with weapons. This should have been done on the day one, but was sabotaged by some US paid Russian generals..lot of them are already in jail awaiting trial, at the end of which they will likely be executed (and rightfully so)

This conflict is turning out to be a blessing in disquise for Russia, as they are now able to identify and go after the domestic traitors, whom were tasked with sabotaging Russian efforts and lay groundwork for a regime change (paid for by uncle Sam).

Putin has to to sabotage Russian war effort. Is too soft.

Oh lol, Russia didn’t want to destroy the infrastructure, as the orc leadership thought Ukraine would be toppled easily.

But keep on changing the history with strong copium nonsense if it helps you. 🤷

Hjalmar
Reply to  Z FOR VICTORY

Thank you so much Z, for explaining what has been going on behind the scenes. I realized a few weeks after the invasion had begun that something seriously was going wrong with the Russian operation, like all those strange decisions that were taken that never made sense, and now I know what it was. Hopefully those traitors will be dealt with accordingly

Siberian
Reply to  Z FOR VICTORY

Good analysis. But I think these jailed examples won’t be executed as Russia doesn’t have the death sentence? Maybe that law has to change again? I think it should…

CrniBlack
Reply to  Z FOR VICTORY

I think Putin started draining the swamp, to use the words of his fallen “comrade”.

This conflict is turning out to be a blessing in in many different ways for Russia, as they are now able to identify and go after the domestic traitors, whom were tasked with sabotaging Russian efforts and lay groundwork for a regime change (paid for by uncle schmule).

I don’t believe in any media, but Russian propaganda is the worst. Orcfront is nothing else than a FSB operative pretending to be independent. Right at the beginning of the war Orcfront clarified that it is taking a pro Russian position, no matter how stupid it is.

Have fun reading that article, you just have to scroll down to February, and better think twice before rambling that would have something to do with journalism. Real journalism never takes a side.

With other words, the article itself is nothing else than the admittance that Orcfront has nothing to do with journalism in the first place. Have fun.

I agree with most of what you are saying, but as I see it, western media lie non-stop, whereas RT, Sputnik, Tass, Pravda and all the alternative sites, like Rense, to name one site I appreciate, are at least trying to tell the truth as they see it. Brother Nathanael’s site is another great source of information, especially if you’re a Christian and a fan of Putin. SF is for me the best site when it comes to this conflict, as I learn new stuff here everyday, even from some of the trolls. lol.

If you aren’t taking Orcfront serious, there is at least one advantage about it, both sides are in the comments. Which can give at least some insight.

But make no mistake, the spin doctors on both sides know very well how to frame things.

Usually the western side is better in regards to filter bubble management, while the eastern propaganda narrative looks more like a ruffian, as it has a different aim, but in fact can be very sneaky.

Both sides won’t accept independent channels which are gaining too much traction. It was more obvious during the cold war, but the principles remained the same.

There is no one innocent in this war, the simple but sad truth. Worse, it counts for all wars.

Why I’m nevertheless taking the western side is, currently the George double booh is called Putin. He is not the first henchmen of the devil, nor the last.

Anyway, gnothi seauton is not about others in the end, and that is what this world is really about. 😉

Sad to hear that you feel that way about Putin, but you have your reasons as we all do, I suppose, when deciding on which side of the fence we want to stand. Sure both sides can be heard in the comment section and that is, of course, why we all like to hang here. This dynamic of the site is what gives it its character, even though it mainly is supported by the Russian fans. Its a shame really that we can’t all come together and agree on what side is best for mankind and the world as a whole, but then, of course, sites like this would have no purpose any longer. I actually believe that most of us hanging here are old soldiers, of sorts, if not from this life time, then from lifetimes past. And perhaps that is why we enjoy this strange concoction of different people and their often crazy and/or hilarious ideas on how to save the world of their desire. One great example of the latter was when Hey had the novel idea of moving all the people of eastern Ukraine to the western part of the country and vice versa, something he reckoned would end the war.

old news.. released at the ‘qualified’ time tanker traffic stopped a month ago.. don’t you remember the burning tanker? Still quite the story.

f u c k you
Reply to  Vlad butcha orc

paquo
Reply to  f u c k you

i dig the screen name!

Except they tolerate endless idiotic trolling by mentally diseased degenerates like this Vlod UkroOrk Bucha aka hans raus +1000 other gay names.

This happened in world War 2 as well with Germany and the USSA. Its great that all the traitors are exposing themselves.

It is hard to tell the difference between corruption, straight out backstabbing, soft power and the natural order of things.

23 March 2022 12:16 GMT UPDATED 23 March 2022 13:07 GMT By Vladimir Afanasiev Caspian Pipeline Consortium, the operator of a key oil export pipeline from Kazakhstan to the Russian Black Sea port of Novorossiysk, has warned about a major disruptions to oil shipments in March and April due to the impact of storms last weekend.

This is expected to happen sometime during tomorrow, 24 March, he said.

According to Gorban, the operator is currently waiting for sea conditions to improve to inspect a first loading buoy, known as SPM-1, with tanker loadings expected to resume at significantly reduced rate if no damage is found.

there are no pipelines caring oil across the Black Sea. you can bet that the buoys are destroyed most ships in the Caspian are below 10kmt dead weight and that all tanker traffic in the Black Sea cease I’m betting that the sub hunt is on

During the operation in Ukraine, Britain imported Russian oil for 220 million pounds – about 1.9 million barrels:

“The British government is no stranger to hypocrisy, but to promise ‘unwavering support’ to Ukraine while simultaneously shipping almost 2 million barrels of Russian oil is utter hypocrisy even by Boris Johnson’s standards,” Independent, citing a new Greenpeace study.

Let the 5th columnists let themselves be known. Although annoying, I can’t see this have any significant affect now that the Ukrops have had their infrastructure destroyed.

We also already know who the traitor countries surrounding Russia are. Better to keep them in check.

Nationalize Lukoil – they are playing Russia like the cutthroat Globalist they are. Now we know why Russia never took out the railroads all across western Ukraine. $$$