Written by Anatoly Karlin; Originally appeared at The Unz Review

At the tail end of the Cold War, there was an incredible atmosphere of Americanophilia throughout the USSR, including amongst Russians. 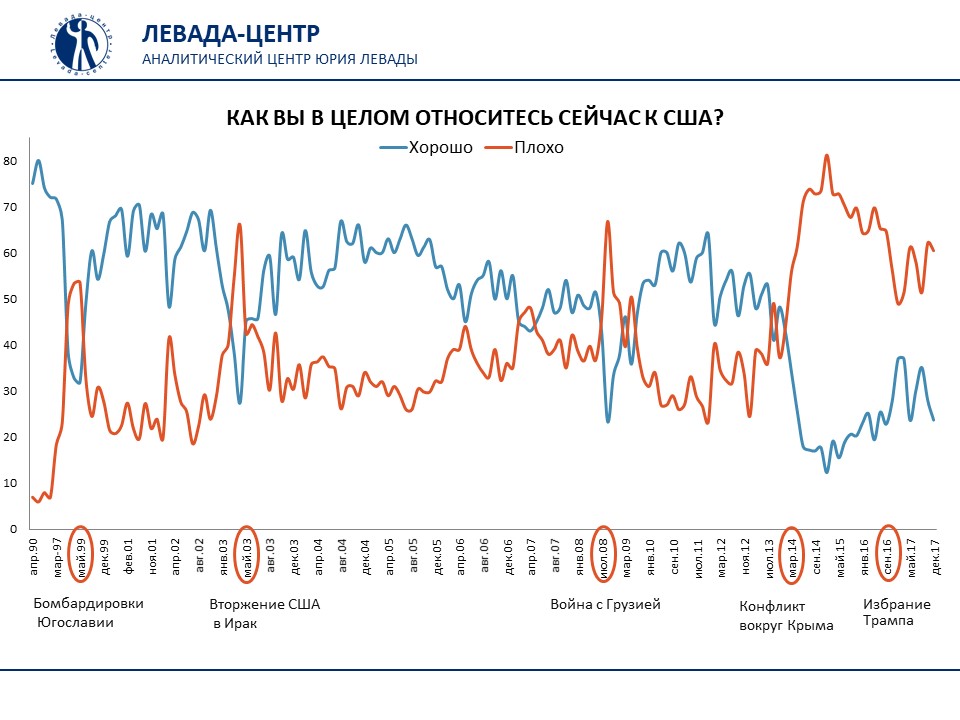 By modern standards, this would have put Russia into the top leagues of America fans, such as Poland, Israel, and the United Kingdom. It was also around 10%-15% points higher than contemporary US approval of Russia.

The blogger genby dug up a VCIOM poll from 1990 asking Russians – that is, Russians within the RSFSR, i.e. the territory of the modern day Russian Federation – what they thought about Americans.

The poll was redone in 2015, keeping the same questions, which allows a direct comparison between the two dates. 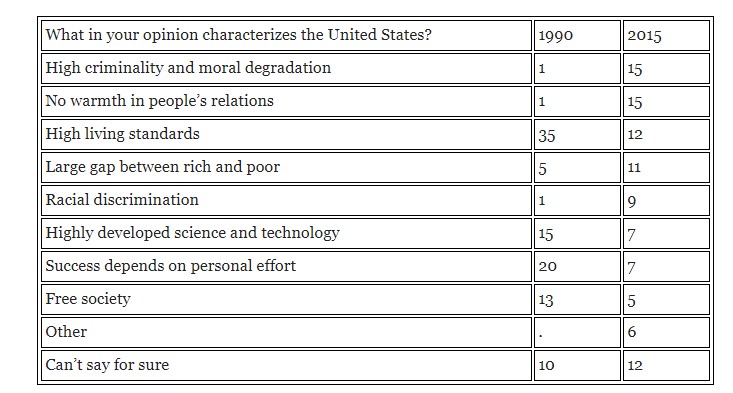 I would wager Russian opinions on America were more positive c.1990 than the opinions of the average American on his own country today!

These results speak for themselves and hardly need more commentary.

Nowadays, of course, things are rather different. Suffice to say the numbers of America fans have plummeted, while the percentage of Russians with actively negative views emerged essentially out of nowhere to constitute majority opinion. According to other polls, Russian approval of the US rarely breaks above 30%, and the sentiments are quite mutual. Just 1% (that’s one percent) of Russians approved of US leadership by 2016. Although there were hopes that this trend would turn around after Trump, which seemed plausible in early 2017 and indeed seemed to be happening, this was in the end not to be.

What I think is more significant is that nobody likes to talk about it now, because it reflects badly on pretty much everyone.

Russians would have to acknowledge that they were naive idiots who threw away an empire centuries in the making to end up within the borders of old Muscovy in exchange for… jeans and “common human values.” These figures testify to the complete and utter failure of Soviet propaganda, which spent decades spinning tales about American criminality, unemployment, and lynched Negroes only to end up with a society with some of the most Americanophile sentiments in the entire world. It also makes it much harder to scapegoat Gorbachev, or the mythical saboteurs and CIA agents in power that feature prominently in sovok conspiracy theories, for unraveling the Soviet Union, when ordinary Soviets themselves considered America the next best thing since Lenin and the US government to be their friend.

For their part, Americans would have to acknowledge that Russians do not have a kneejerk hatred of America, and that the “loss of Russia” was largely of their own doing. The arrogant refusal to take into account Russian interests after the Cold War, instead bombing their allies, expanding NATO to Russian borders in contravention of verbal commitments made to the USSR, and for all intents and purposes treating it as a defeated Power, may have made sense when it seemed that the US would be the world’s dominant hyperpower for the foreseeable future and Russia was doomed to die anyway – as was conventional wisdom by the late 1990s. And from a purely Realpolitik perspective, the results have hardly been catastrophic; the US gained a geopolitical foothold in Eastern Europe, tied up further European integration into an Atlantic framework, and closed off the possibility of the “Europe from Lisbon to Vladivostok” envisaged by Charles de Gaulle. On the other hand, in a world where China is fast becoming a peer competitor – with the implicit backing of a resentful Russia – this may, in retrospect, not have been the best long-term play.

The only way for USA to survive is to extend. Stop their expansion and they will die by themselfs.

That has been the problem for every empire and it is said to apply to business’s as well . ‘Expand or fade away’.

I think you are correct.

Merry X-mas for SF team and for all readers!

Why didn’t the lines cross in 2011 with the Gaddafi betrayal, yet another sign of Russian naivety. What happened in 2014, I don’t read Russian?

It’s just shitty Levada-centre being referenced, I still remember graffiti “hands off Gaddafi”, “russians stand for Gaddafi” from the time.