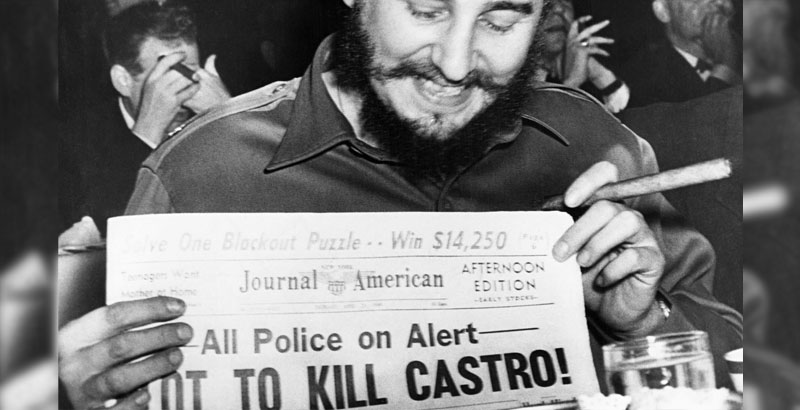 Fidel Castro holds up a newspaper headlining the discovery of a plot to kill him, during a visit to New York in April 1959 (Photo: Corbis / Bettmann)

Leader of the Cuban Revolution and former Cuban president, Fidel Castro, died on 91st year of his life, chairman of the Council of State and Council of Ministers, brother of the deceased, Raul Castro said on Cuban state television.

“With profound sadness I am appearing to inform our people and our friends across [Latin] America and the world that today, 25 November 2016, at 10.29pm, Fidel Castro, the commander in chief of the Cuban revolution, died,” Raul Castro said.

He also added that in accordance with the wishes of the deceased, “his remains will be cremated.”

Raul Castro concluded his address with the famous revolutionary slogan: “Onwards to victory!”

On Saturday, the Cuban government announced that Fidel Castro’s ashes will be interred at the Santa Ifigenia cemetery in Santiago de Cuba on December 4. The public viewing for Fidel Castro will begin on November 28 near the Jose Marti Memorial in Havana. On November 29, a demonstration will take place at the Revolution Square in the Cuban capital. Reportedly, the next day after the demonstration, transportation of Fidel Castro’s ashes will be begun in Santiago de Cuba on a route, retracing the path of rebels, led by Fidel Castro in January 1959, after the overthrow of Fulgencio Batista’s regime.

The government decreed nine days of mourning – from November 26 to December 4, “public activities and shows will cease, the national flag will fly at half mast on public buildings and military installations.”

A number of leaders of countries of all over the world, politicians and diplomats have already expressed their condolences to Cuban people.

“The name of this distinguished statesman is rightly considered the symbol of an era in modern world history,” Russian President Vladimir Putin said in a telegram to Raul Castro.

Venezuelan President Nicolas Maduro, the main ally of Cuba in the region, wrote on his Twitter: “It is up to us to continue his legacy and carry his flag of independence.”

Chinese president Xi Jinping said that “Chinese people have lost a good and true comrade. Comrade Castro will live forever.” He also added that Castro was “a great man of our time” and that “history and people will remember him.”

Vietnam’s President Tran Dai Quang, who was among the last heads of state to visit Castro on November 16, said that “for all Vietnamese, Fidel was a great friend, a comrade and a very close brother”. He also added that he was “a pure symbol of true internationalism in the fight for independence of nations.”

Fidel Castro was born in the village of Biran in a family of an owner of a large sugar plantation in the Cuban province of Oriente. In 1945 he entered the University of Havana, received a law degree. In 1953 Fidel Castro led the assault on the Moncada Barracks, after which he was arrested and sentenced to a long prison term. In December 1956, Fidel Castro, his brother Raul and Argentine doctor Ernesto Che Guevara led the revolutionary movement against Batista in the island. After the victory of the revolution in January 1959, Fidel Castro became Prime Minister of Cuba. In 1965, he became the first secretary of the Communist Party of Cuba and transformed Cuba into a one-party socialist republic. From 1976 to 2008, he held positions of chairman of the State Council and the Council of Ministers of Cuba, as well as a position of the Supreme Commander. On February 19, 2008, 5 days prior to the expiration of the term of office, Fidel Castro announced that he refused from a new term in office. On April 19, 2011, Castro officially resigned as First Secretary of the Communist Party of Cuba. All his powers passed to his brother, Raul Castro.

In December 2011, Fidel Castro was included in the Guinness Book of Records as a man, who survived the greatest number of assassination attempts – 638. In 167 cases, participants of conspiracies were arrested and brought to the trial; judicial cases of some of them were transferred to judicial authorities of other countries. Reportedly, the most part of assassination attempts was prepared by the US Central Intelligence Agency (CIA) at the time, when Fidel Castro held office of the President of Cuba. From the famous exploding cigars to poison pills, hidden in a cold-cream jar, the CIA and Cuban exile groups spent nearly 50 years devising ways to kill Fidel Castro, however, they did not manage to do it.

“Soon, I will be turning 90 years old. I never imagined it and it has not been the fruit of any labor. It was purely a whim by destiny. Soon I will be like everybody else, everybody will get their turn, but ideas of the Cuban Communists will stay as proof that on this planet, if you work with diligence and dignity, you can produce material and cultural values, which people need, and we must to work hard to get them,” Fidel Castro said during one of his latest speeches in April 2016. 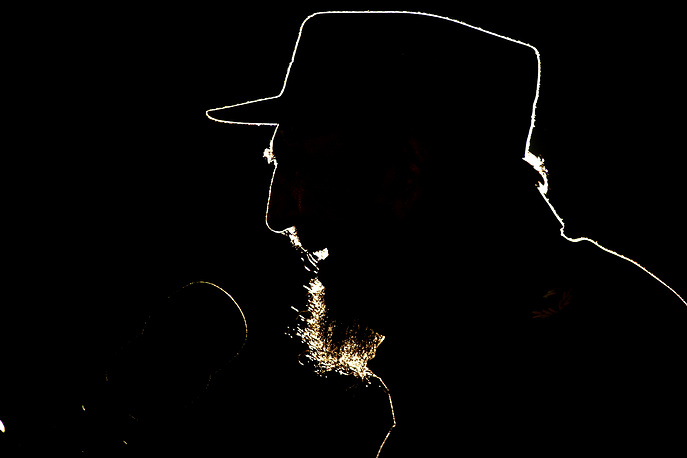 Fidel Castro speaks during the ceremony in which President of Venezuela Hugo Chavez was given the UNESCO Jose Marti award for his efforts in education February 3, 2006 in Havana, Cuba (Photo: Getty Images / Mambo Photography / Sven Creutzmann) 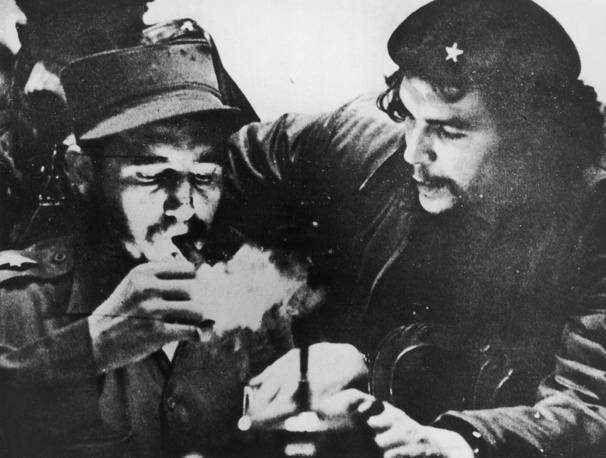 Cuban revolutionary Fidel Castro (left) lights his cigar while Argentine revolutionary Che Guevara (1928-1967) looks on in the early days of their guerrilla campaign in the Sierra Maestra Mountains of Cuba, circa 1956 (Photo: Getty Images / Hulton Archive) 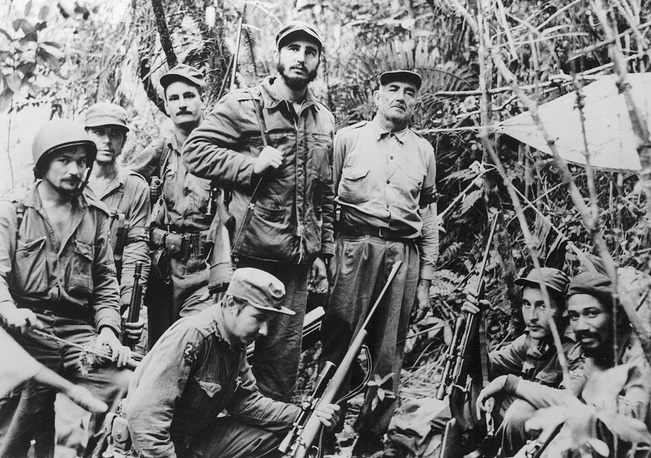 This photo, filed June 1957, is believed to be the only existing one of Fidel Castro, leader of Cuba’s revolutionary forces, and members of his staff and troop commanders made at a secret base near the coast. The group includes five captains, the entire top command of the guerilla army. From right are Capt. Juan Almeida, Capt. George Sotus, Fidel Castro, Capt. Raul Castro, the leader’s younger brother (kneeling in the foreground), Capt. Guillermo Garcia, (wearing helmet at left), Lt. Universo Sanchez, Castro’s adjutant, (third from left) and Dr. Ernesto Guevara, (second from left), the official physician of the rebel army (Photo: Getty Images / Bettmann) 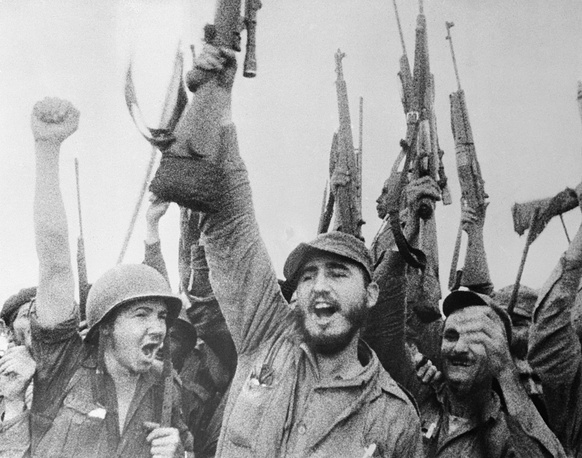 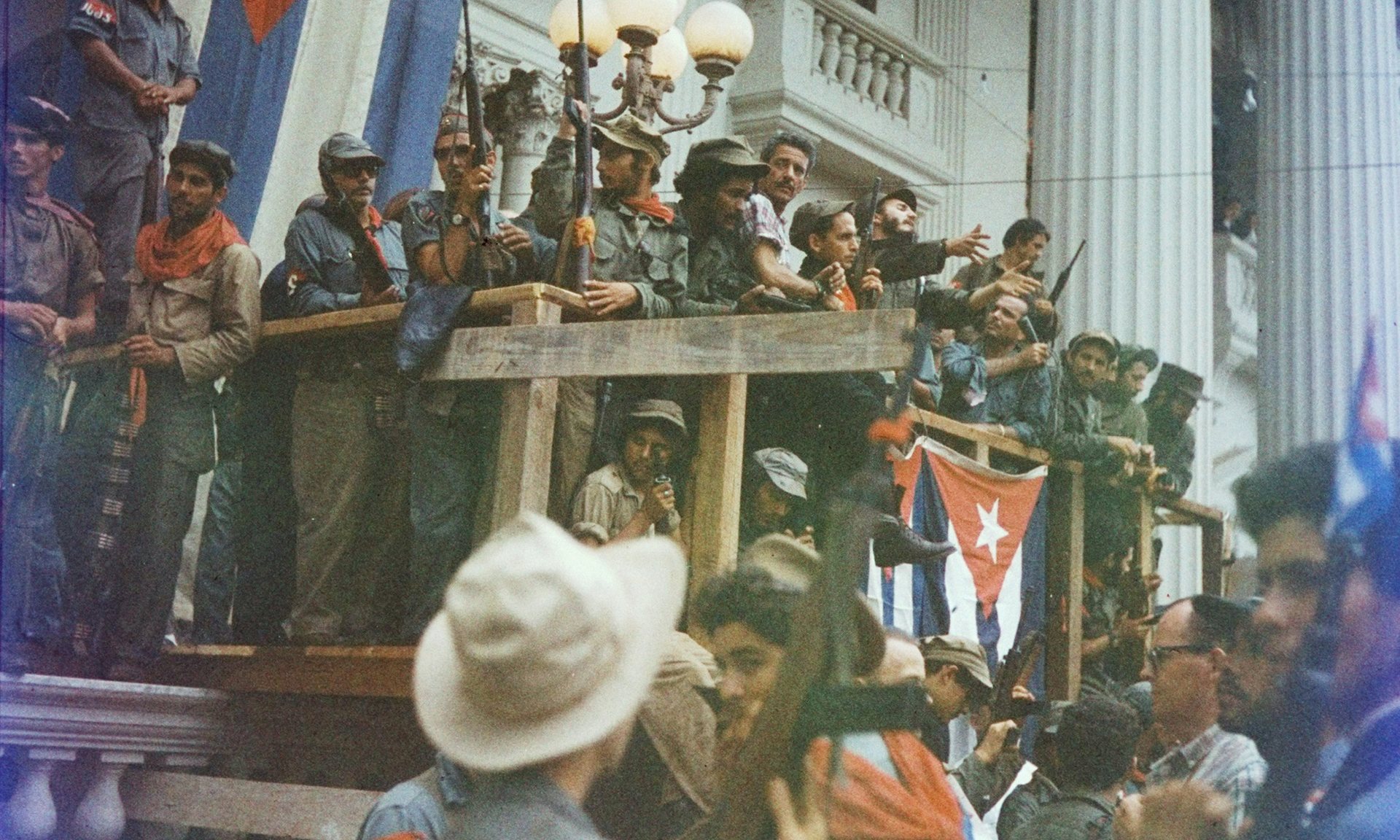 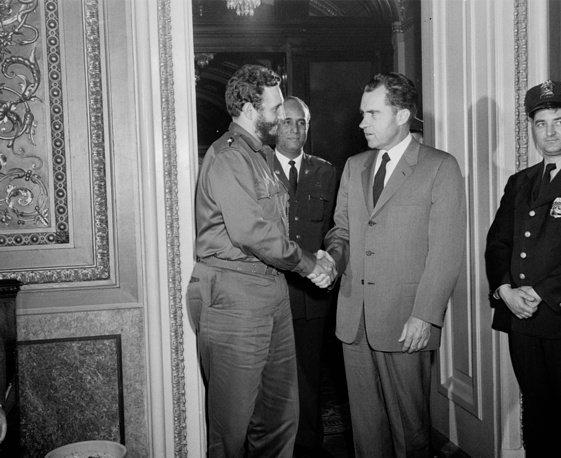 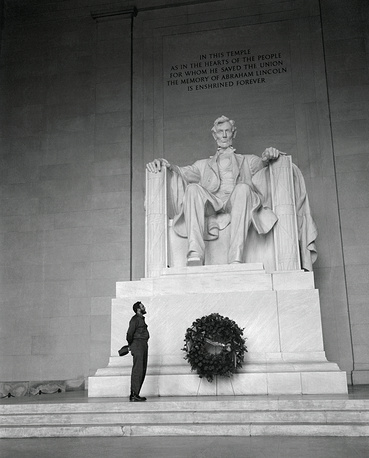 Fidel Castro looks up at a statue of emancipator Abraham Lincoln after laying a wreath at the Lincoln Memorial (Photo: Getty Images / Bettmann) 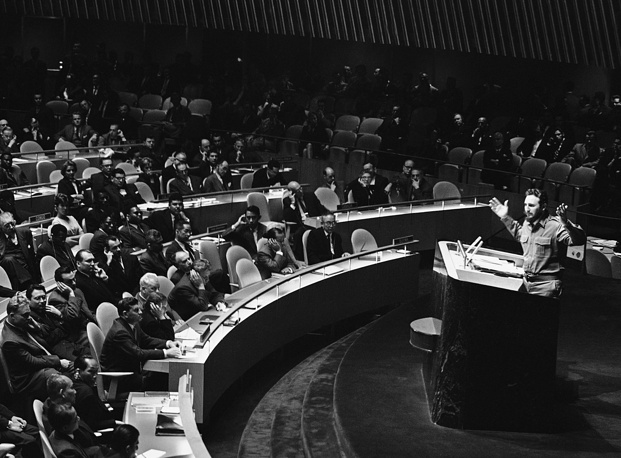 In this Sept. 26, 1960 file photo Cuban leader Fidel Castro denounces the United States in the longest timed speech ever in the U.N. General Assembly (Photo: AP) 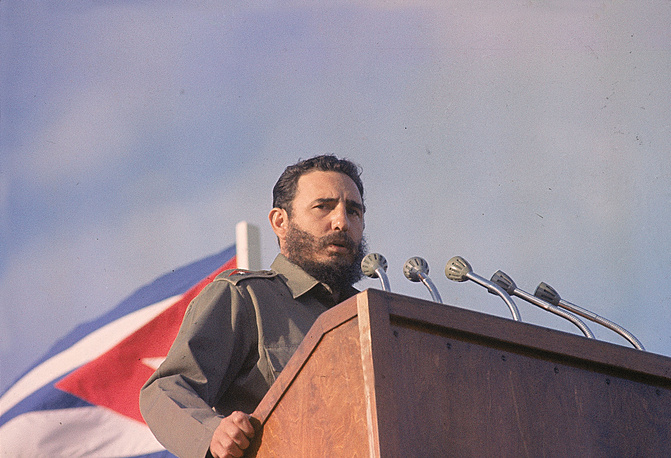 Cuban Prime Minister Fidel Castro is seen as he delivers a speech during anniversary celebrations in Cuba, on July 26, 1964 (Photo: AP) 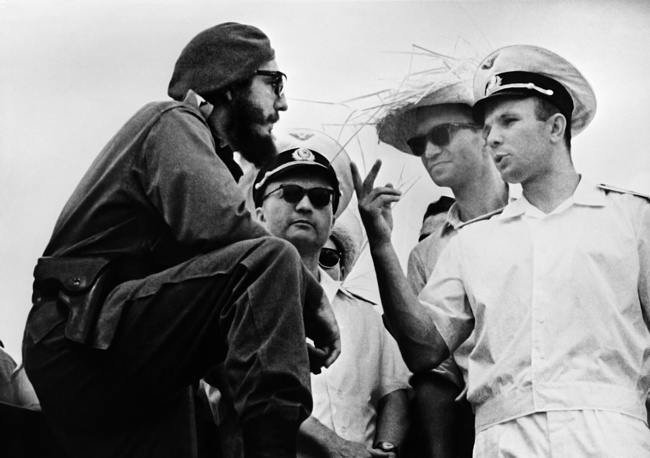 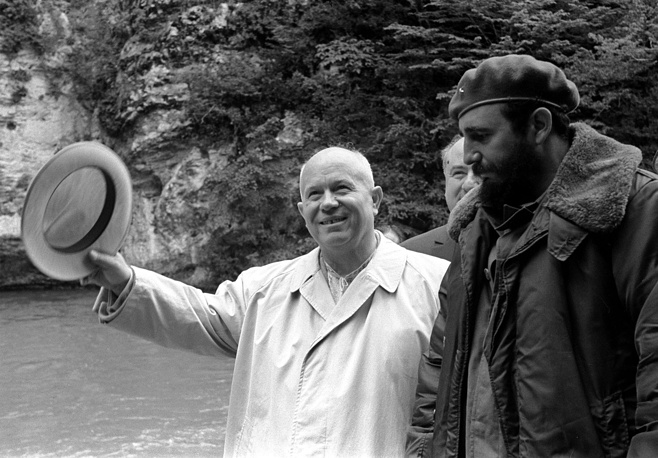 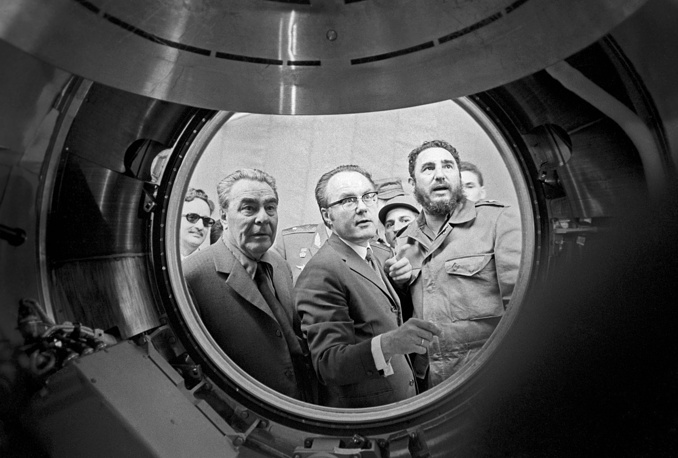 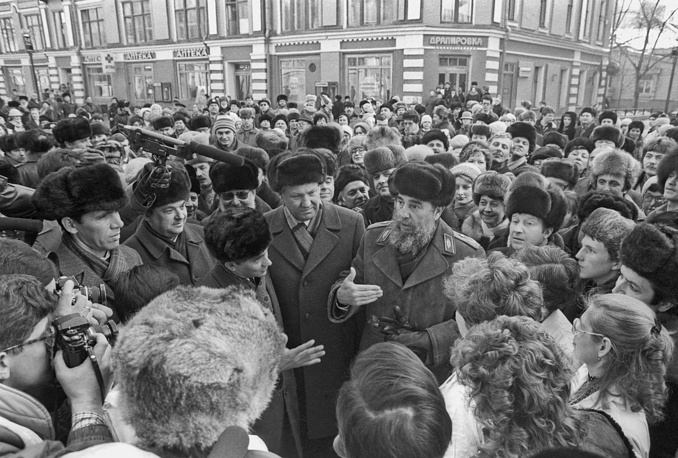 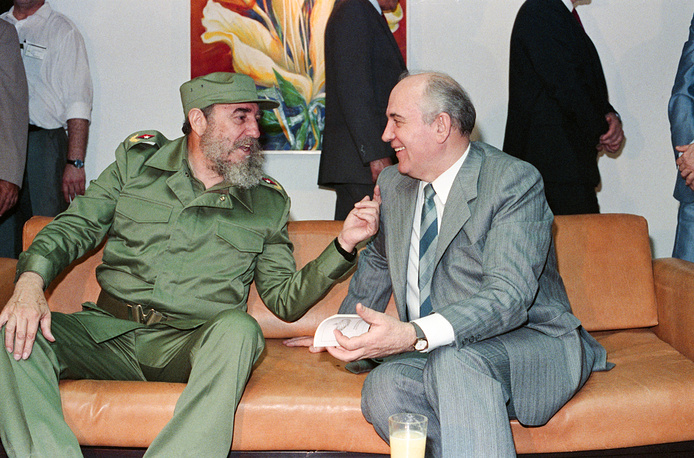 Cuba. April 3, 1989. Visit of Mikhail Gorbachev to Cuba. General Secretary of the CPSU Central Committee, Chairman of the Presidium of the Supreme Soviet of the USSR Mikhail Gorbachev and Fidel Castro during a meeting (Photo: TASS / Vladimir Zavyalov, Edward Pesov) 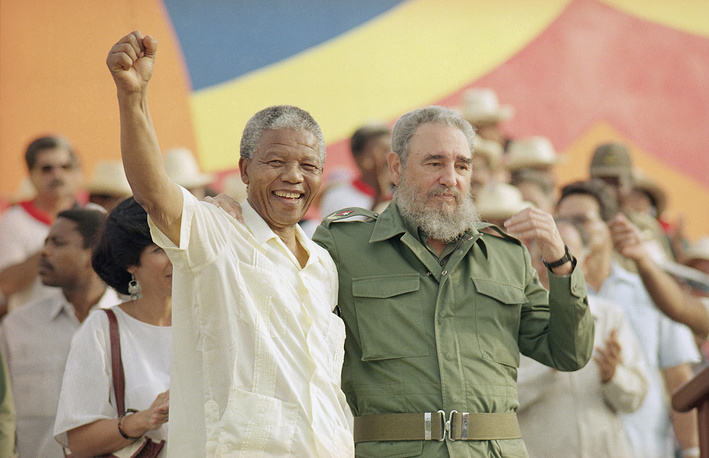 Cuban President Fidel Castro, right, and African leader Nelson Mandela gesture during the celebration of the “Day of the Revolution” in Matanzas Saturday, July 27, 1991 (Photo: AP) 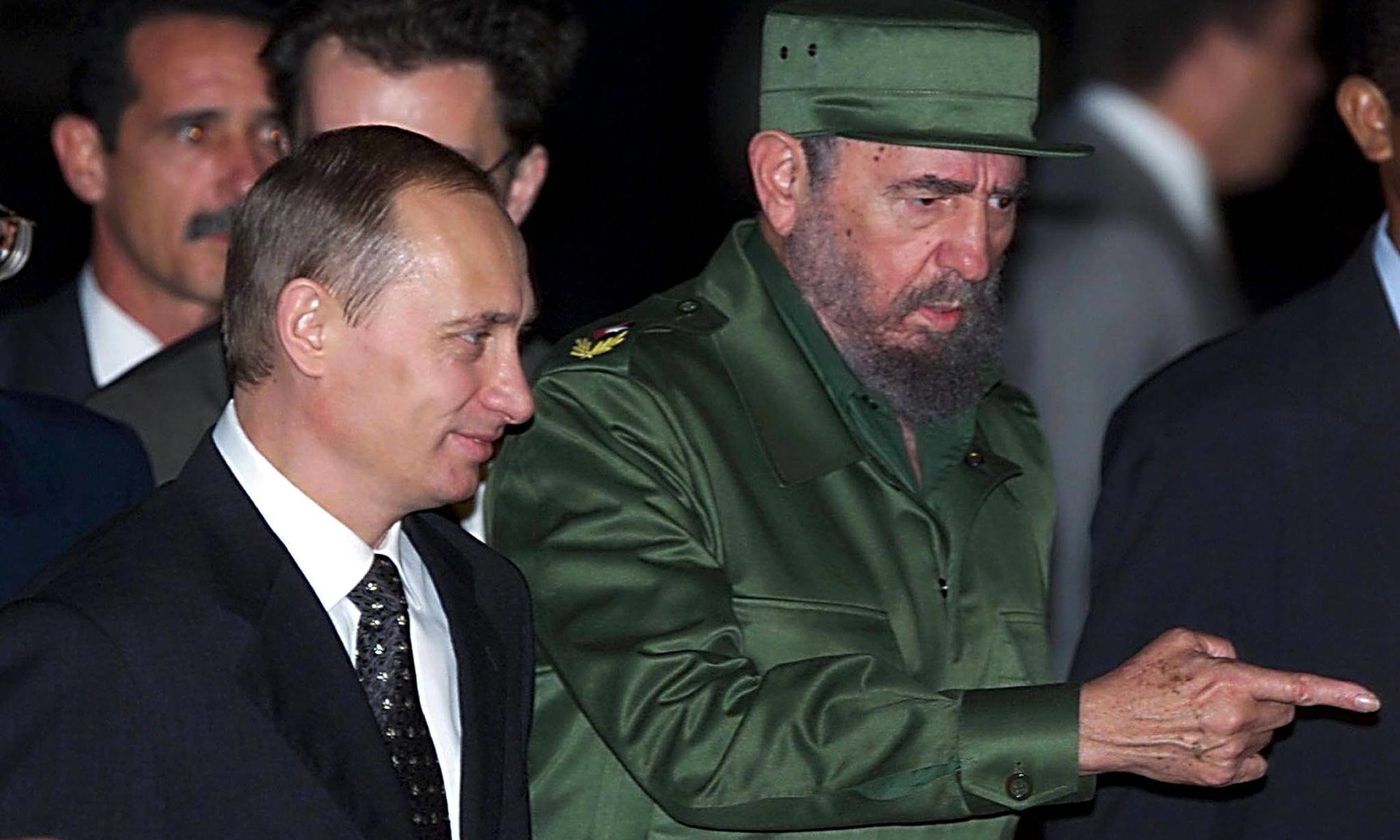 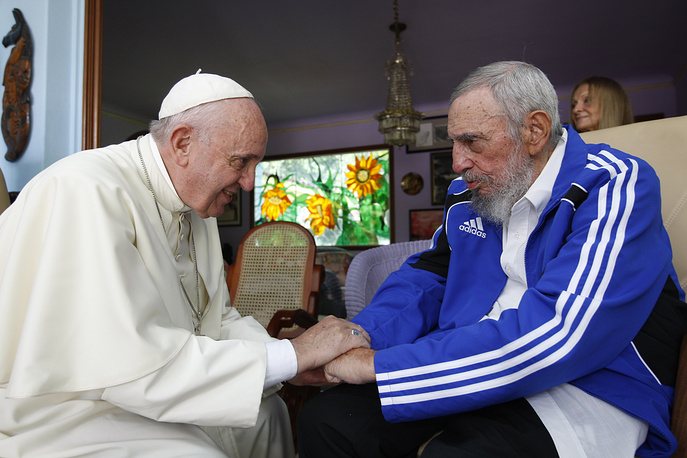 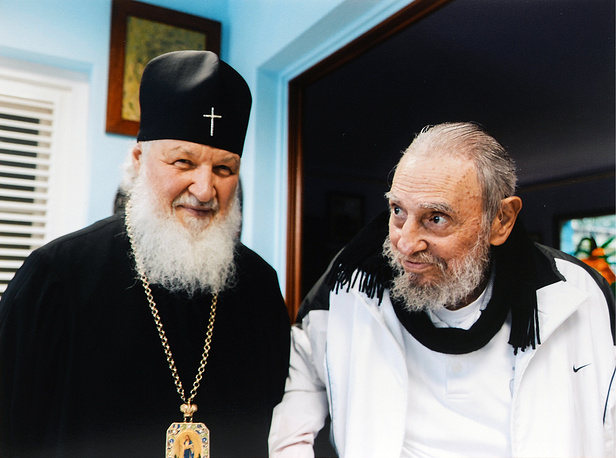 Patriarch Kirill visits Fidel Castro at his home, Cuba 2016 (Photo: Press-service of the Patriarchate of the ROC / TASS) 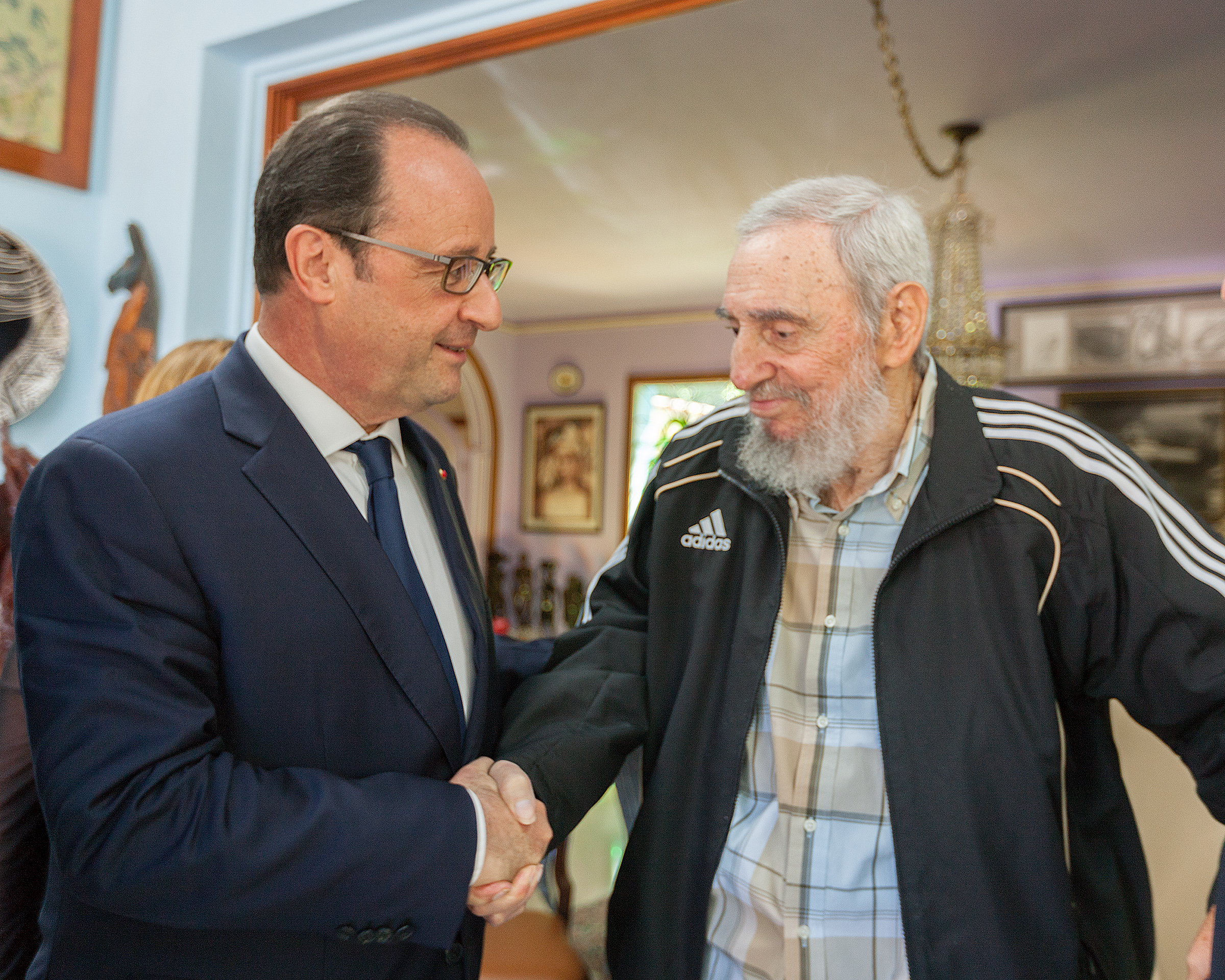 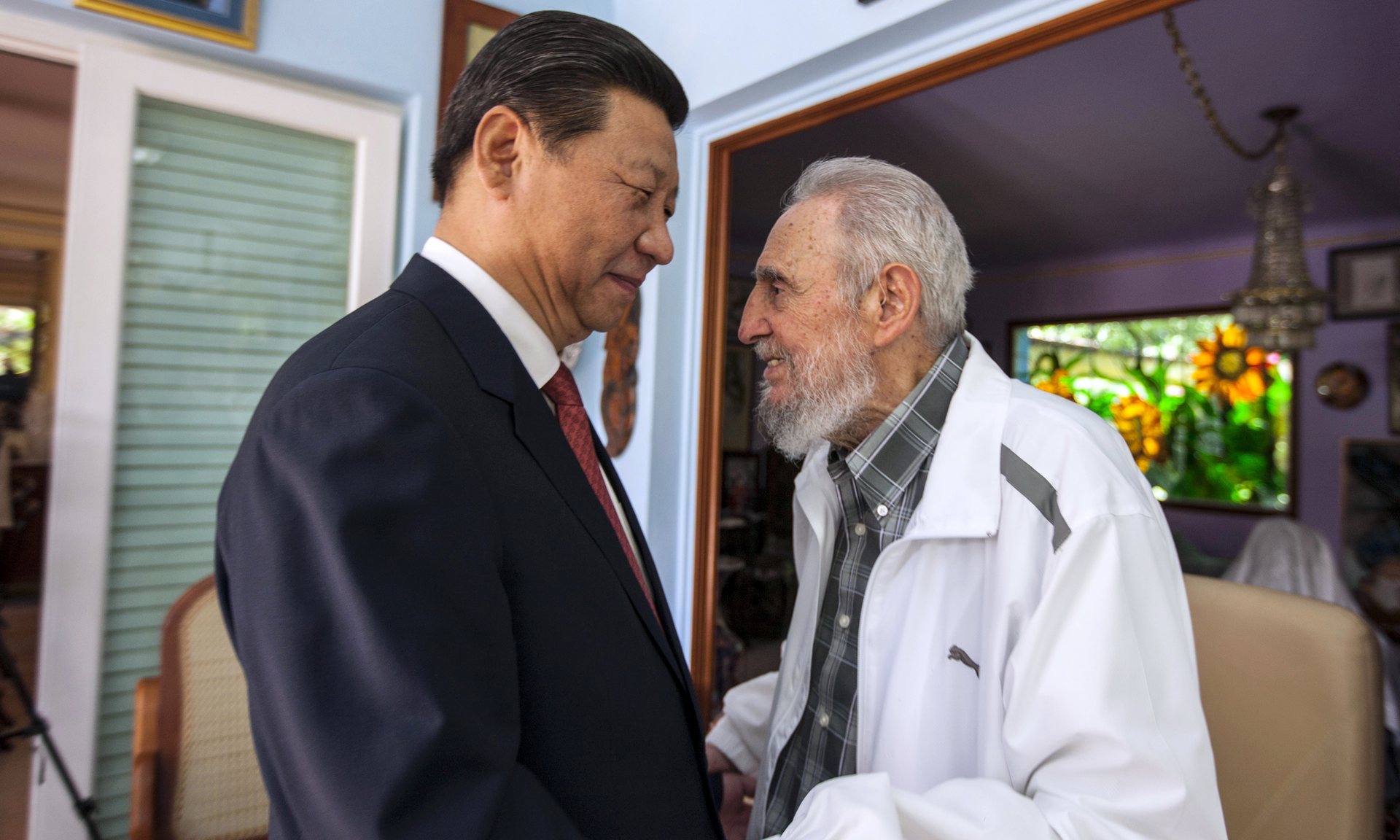 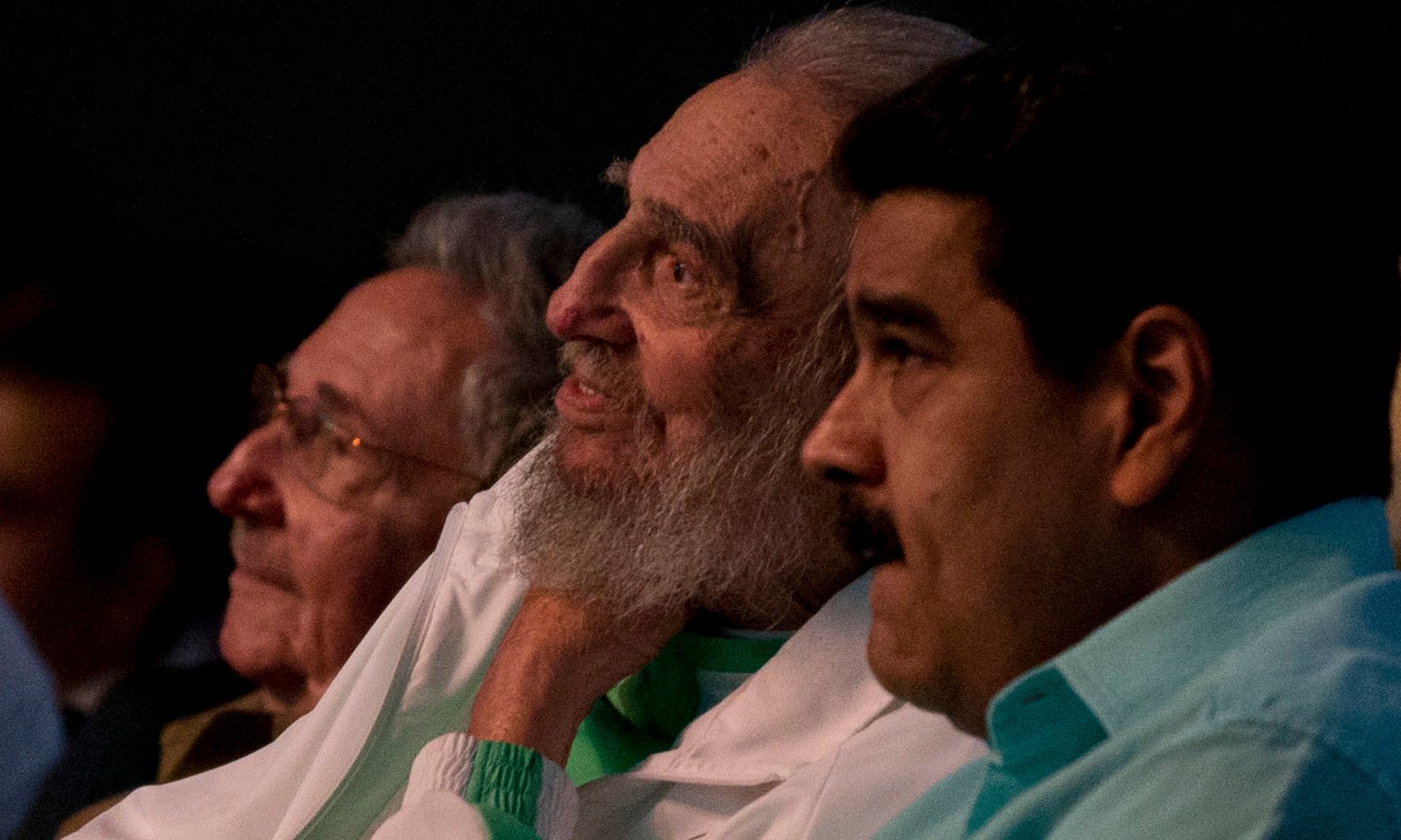 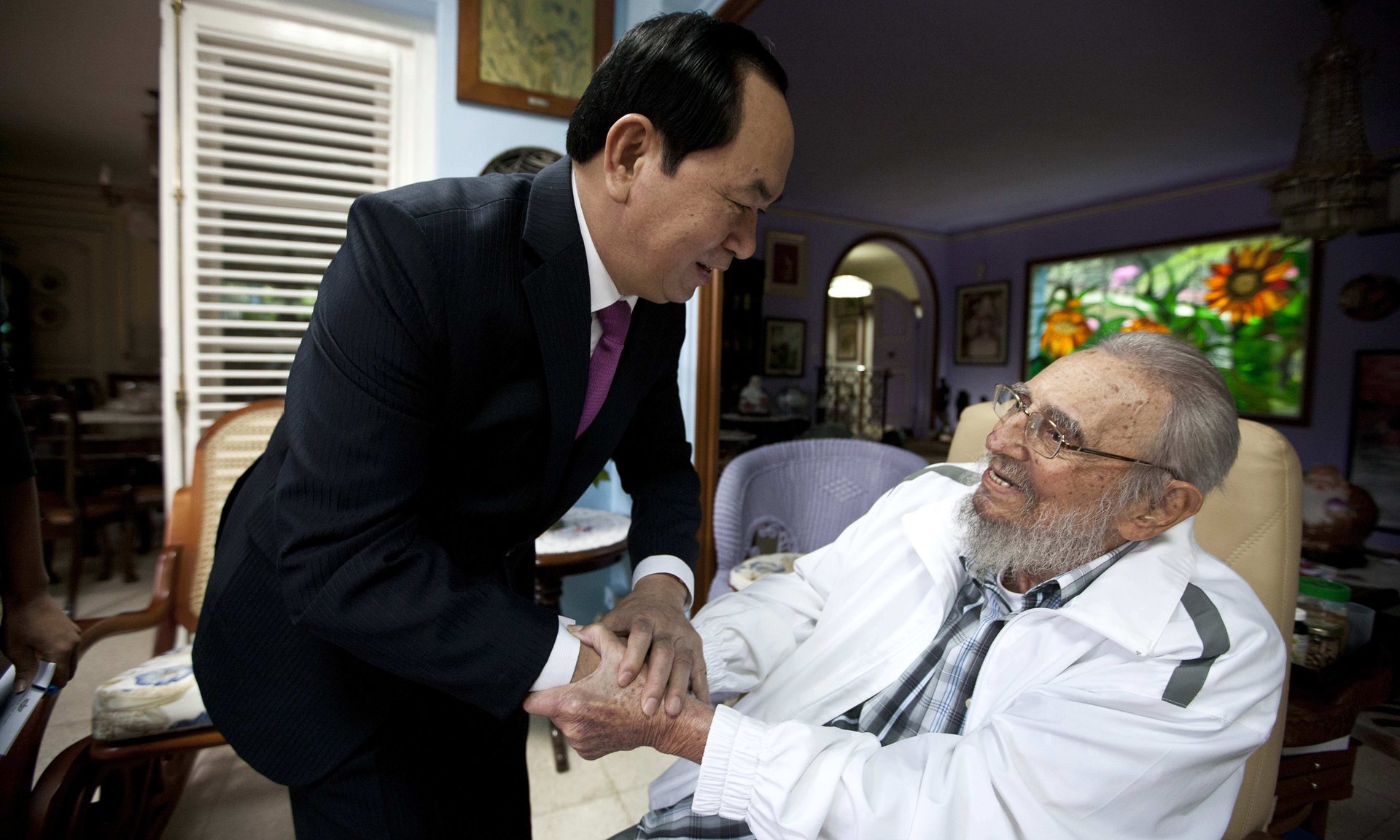 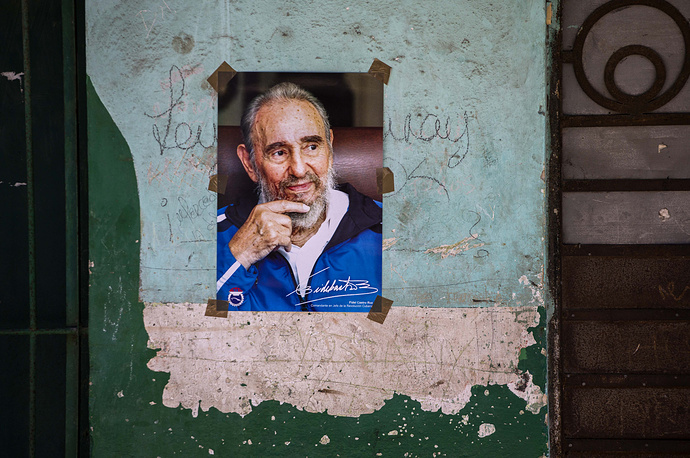 Mincho Hristov: Cuba still has unresolved issues with the US

Castro Says NO to Obama’s Clap

Good thing he was wearing all that Nike/Adidas capitalista leisure wear towards the end. Who else could ‘escape’ the CiAda except for someone that the Rockefeller family visited on a regular basis (i.e., Rockefeller agent).

Spot on. Look at this photo and there are hundreds like it. How significant was Castro to the Vatican?

Pope Benedict before his visit to US made a stop over in Cuba to meet Castro. Why? Just for fun of it? On that occasion Castro appears to wear a black apparel as a sign of submission to the pope.

He had been visited by pope Frances too, few days before he passed away.

At least Fidel did not go out like JFK or Gaddafi, or Allende… ad infinitum.

When one has escaped 638 known attempts of murder , a force much bigger than the Pope has his back . Greet the Eternal with dignity .

Really. So he enjoyed God’s protection? Is that what you are saying? It seems like God has been pleased with his Marxist ideology or has he? There is a force much bigger than pope that had his back. 100% true. You only need to find who it was without being too presumptuous or jumping too quickly into conclusion. Not all that appears to be supernatural is of God just like not all that comes from media is true. It’s up to you to find out what it is without making any short cuts. However I wouldn’t bow down in worship before anybody before finding out who that supernatural being is and what is his true nature. Get hold of Dostoevsky’s “Evil Spirits” and read it might help.

If “the Great Spirit” or “the Eternal” , protected Fidel (and not just the KGB), I certainly would not suggest for you, or anyone , to “bow down in worship “, but rather with Fidel as an example, to rise up into Your Power and Godhood . I was simply trying to pay tribute and respect for Fidel , not launch a discussion on the existence of “God” … Honestly my disdain for the Pope , might be showing .

Read this and you may give a second thought to paying respect to Castro. http://beforeitsnews.com/strange/2015/05/fidel-castro-was-a-rockefeller-agent-2460760.html

Trump is now showing is true colour after Castro’s death. Those who have some illusion about this asshole, kindly get rid of that.

What are Castro’s true colors? Try to read Schiller’s “Robbers” and hopefully you will understand.

I don’t read trash written like a historical fiction. Seems something like a book on “holodmor”, “Stalin terror” kind of worthless rubbish.

Read this and become intelligent: http://beforeitsnews.com/strange/2015/05/fidel-castro-was-a-rockefeller-agent-2460760.html

There are enough such trash spread around net and I am not interested to gobble that.

How you can talk about something you have never red. Being presumptuous is not an attribute of a great mind.

This guy should have been tried for crimes against humanity. The Castro Brothers and their families are the ruling class period…and the riches rolled their way while the people are half starved.