Extreme weather, merciless cold in the Midwest United States, snow squalls bringing near-whiteout conditions to the Northeast, nine dead, schools and postal service in many states canceled, and airports closed — an “act of God” as they say, yet MSNBC’s Rachel Maddow still found a way to make it all about Putin.

She breathlessly reported Wednesday evening that life-threatening cold weather in the US could be weaponized by Russia. Maddow invoked a recent intelligence assessment which speculated over Russia and China’s abilities to launch cyber-attacks on critical US infrastructure, including natural gas pipelines. Running with this “what if” scenario, she launched into her now well-known conspiracy theorizing and fear-mongering, saying “It is life-threatening! And it is like negative 50 degrees in the Dakotas right now.”

You'll never guess who is seizing on life-threatening cold weather in the U.S. to fear-monger about… Russia! pic.twitter.com/deo2H4SBBQ

We’re relying on their [Russia and China’s] good graces that they’re not [attacking us]. It is life-threatening. And it is like negative 50 degrees in the Dakotas right now. What would happen if Russia killed the power in Fargo?

Posing more questions that perhaps rival Condoleezza Rice’s infamous “mushroom cloud” statement when it was Iraq and not Russia as the media’s latest boogeyman, she continued:

What would happen if all the natural gas lines that service Sioux Falls just poofed on the coldest day in recent memory and it wasn’t in our power whether to turn them back on? What would you do if you lost heat indefinitely as the act of a foreign power?

This was enough for journalist Glenn Greenwald to request that the network scrub the absurdly embarrassing segment from the internet altogether. “I’m not even joking. I have so much work to do and I can’t stop watching this,” he said. “MSNBC often removes its most embarrassing debacles from the internet. Someone please do that here so I can get to work.”

I'm not even joking. I have so much work to do and I can't stop watching this. MSNBC often removes its most embarrassing debacles from the internet. Someone please do that here so I can get to work pic.twitter.com/sdNn20XBv4

He followed by posing a serious question for liberal media in 2019: “For anyone who prides themselves on being a rational, fact-based person who shuns fear-mongering and unhinged conspiracies, please answer honestly – I’m genuinely interested in your answer: do you feel any embarrassment at all while you watch this???” 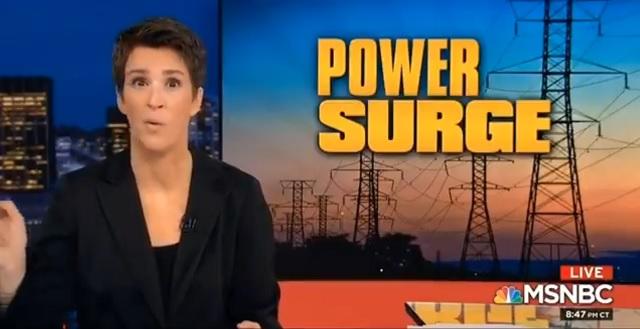 Sadly we expect the answer to by and large be “no” — but at least this will bring more future hours of news coverage unhinged-conspiracy-fearmongering-as-entertainment TV watching.

THE TERRORISTS – I mean: RUSSIA!!! – are coming to take away the heat from you and your American families during winter!!! What will you do?!?!?!? This is the brain poison liberals feed on every night: https://t.co/9XSIyVrlc0

Sergey Lavrov just hacked my boiler and unplugged my refrigerator.

However, as independent journalist Aaron Maté points out, this is also serious business given the way Maddow is manipulating a truly dangerous extreme weather situation.

>>Sergey Lavrov just hacked my boiler and unplugged my refrigerator.<>>>>>>>>>>>>>>>>>>>>>>>>>>>>>> logic, that’s just the way it is. Pickup artists have a trick when it comes to women trying to test men with emotional arguments, agree and amplify. And this Sergey Lavrov tweet is a prime example of that. Go along with it and turn it up into absurdness. Make a million tweet and facebook posts like that and the anti-Russian propaganda loses its power because it has become what it already is, utterly ridiculous.

Well said, you are correct this has all reached and absurd level.

I’ve never bought into all that “freedom” stuff, but the USA did once seem to have a capacity for innovation. How did it become such an incredibly backward-looking place, where all the attention still goes to the legacy media and the two officially allowed parties, decades after either last served a meaningful purpose? Yes, jews lie; can we please acknowledge these and others as a fact of life and, you know, move on?

The question should be asked is “what would you do if we sanction you?” Don’t record modern Russia sanctioning another state unless they drew first blood.

Natural Gas has a nasty habit of shrinking in the pipes in very cold weather due to physical condition of matter. Perhaps Russians told it to do so, who knows?

But if Russians could control the weather, one would think they use it on their own vast country, so they have less winter and more spring, but noooo… They had to finger the Americans with this ability! Naughty.

Thing is that we love our winter.There’s something very special about snow falling late evening – winter fairy tale. What I don’t like is temperatures hovering around zero – that’s a bad weather. Once it is below ~ 8C it is nice and refreshing.

This must be the fucking dumbest news story ever.

Its fucking winter in the Dakotas…guess what, its cold its normal!!!

It seems media and goldfish do have something in common after all.

Another ridiculous claim….gas and oil litterally poop out of the ground there…so another lie.

Exactly what came into my mind when I saw USA had extreme freezer temperatures. Putin would take this as a weakness, dump an EMP over US and laughing his arse off seeing American´s without heat dying with icetaps under their noses and 5 sweaters on………………LOL.

There are solid foundations to not trust Russian Federation like e.g. not paying what they owe in Treaty of Riga.

You can call me Al
Reply to  Bob Starsky

The treaty was subsequently overridden after a decision by war’s Allied powers to change Poland’s borders once again and transfer the populations.

Whoops, have you got it wrong ?

Bob Starsky
Reply to  You can call me Al

retard or what? so called “allies” had no power over Poland. Poland has signed nothing. Beside western border we have rest of borders like in 1939

this is bullshit. like russia has no better things to do then make trouble. get a life!!!