According to reports, the incident took place over the Baltic Sea in June 2017, when the US jet attempted to follow the Russian government plane on its way to the city of Kaliningrad. The US jet was reportedly acting as a part of the NATO Baltic Air-policing mission.

The footage used in this video was first published on January 31 by a Russian military blogger, Fighterbomber. It shows how a Russian Su-27 fighter jet intercepting a US Air Force F-15C warplane.

Russian PMCs In Mali: Another Bone Of Contention Between Paris And Moscow

The both crews are profesionals , they understand one to other !

The most logical common sense statement since I’ve been reading about this interaction. Gezus hasn’t anyone read anything the strategic command airplanes have waved back and forth to each other “The both crews are professionals , they understand one to other !”

WTF have Americans lost in the baltic sea and to follow a Russian Governmental plane ? In 2007 while cruising in Int. waters in the Mediterranean one could hear US Navyships, What is your Crewnumber, your Cargo, Your Destination it’s non of their business, they provoked Khadaffi also and Bombed !

And they have the gall to call it “freedom of navigation.”

It seems the US pilot just gave up on his FoN flight to a big bad Russian who scared him off his flight plan.

I thought the US didn’t back down from Russian aggression!

Well done Su27 pilot, that US pilot is attending a clinic now to help him recover.

I’m sure that American politicians don’t want to back down and stand fast. Of course they are not in a cockpit getting buzzed up close by a reckless Russian pilot. That at least makes the American pilot 100x smarter then his superiors.

If he was really smart he would get a job flying civilian airliners. No sense in following out suicidal orders from McCrazy.

Recless? I would say that he’s displaying exactly what is expected from Russian fighter pilot – that he will defend his assigned ward no matter what. No jokes here.

I would not be in the least surprised if the Su-27 pilot turned on his targeting radar to move Mr. Yankistani along. A Russian presidential fighter escort is expected to lay down their lives and allow no risk to go unchallenged.

I reckon they probably have watched the movie Patton and taken his motto to heart. No war has ever been won by dying for you country. Wars are won by making the other SOB die for his. ;-)

Reckless? Rather good formation flying methinks. The American fucked off but then they always do against people who can defend themselves.

It does but the american pilots would however be aggressive if Russians buzzed their borders! the United States seems to think the Russians can be pressured on their own borders as a normality

US pilot is still changing his diapers…

Presuming the ground crew was able to pry his hands off his joystick. ;-D

Did anyone ever tell you your a fuckwit? NO? well consider yourself told then…fuckwit. bwahahaha

The best thing that could happen to him is for a Russian to occupy his face with a side of bacon delivered at a velocity of 300 meters per second.

The video says it all.

The Yankistani didn’t even try to stand his “ground.” He just scampered away like a “professional.”

Hey Maximus. They talk about professionalism but, they don’t walk the walk. The SU-27 moved him out of the way like a shopper on Black Friday. I have seen Soviet units at sea do their thing in the 80’s. They did their thing but, kept their distance. That F-15 pilot was way, way out of line, imho. I bid a good weekend to you.

When Turkey shot it down with0 military retaliation from coward Russia

:))) i smell a dumb Patriotic_White_ American

That was a SU-24 you dumbshit.

What could possibly go wrong there?

You mean the crap a Turkish F16 shot down?

That was a Su-24 Bomber, that the silly Turks shot down, stabbing Russia in the back. The Russian pilots of the doomed Su-24 had no reason to fear being shot down by the treacherous Turks. an interceptor like the state of the art Su-27 could easily outmatch an F-15 , even a F-16. Moron. Now go outside and play with your toys in your trailer park.

The F15 has never been shot down, been destroying Russian junk for 3 decades and counting!

Actually 2 F-15s were shot down by Iraqi Army in Desert Storm. And 1 was shot down over Serbia in the 1990’s. https://en.wikipedia.org/wiki/List_of_F-15_losses

Fake, it was never lost in combat. The Serbians intercepted less than .5% NATO sorties

Remember the SU25 fake story of it jamming the US destroyer?

The same plane got shot down by a MANPAD in Syria, shoulder fired rocket for Christ’s sake

Not in air to air combat, but 3 of them were shot down by SAM. Remember your mighty stealth F-117 that got shot down by early 1960’s technology SA-3? Yeah, me too :) Oh and Serbian Air defense did a phenomenal job for technologically inferior air defense against 4+ generation fighter aircrafts. They managed to down 1 F-15, 1 F-117, 2 AH-64 Apaches, 1 harrier jet, and 47 UAV’s. LOL. just wait till Serbia receives batches of S-300, BUK, and Pantsir. lets’s see how quick NATO attacks them again.

Along with a “stealth” plane :)

Actually 4 decades, yes they are that old, Happy Days was new back then and Apple Computers were just starting out.

One day fella, the Ruskies will unleash a tsunami on all your coastal cities. Hope you got your surfboard ready.. surf’s up bro’

avionics/radars and weapons are practically the same. countermeasures are the same for both su27 and f15. It would all come down to the better pilot in a dog fight. Russians have proved interception after interception that their su-27 and su-35 are superior in this regard and in BVR engagements. and it was a su24 that was shot down by turkey… which is the russian equivalent of a b-1 lancer. note that the su24 was shot down within 2 km which gave the pilot barely any time to evade the missile or use countermeasures.

Isn’t the SU35 that flying dishwasher that crashed into another SU35 last week? LOL

Get real, the F22 would wipe the floor with 8 of them at the same time, that goes double for that fake SU57 junk China laughs at behind Russia’s back

Seen the vid of a Rafale taking out an F22?

Flying dishwasher? SU-35 IRBIS radar is the most advanced radar ON any warplane on the planet, more advanced than F-35 and F-22. SU-35 intercepted stealthy B-2 bombers and F-22 raptors over Syria. Take a look at this picture. F-22 in the FLIR sights of a SU-35 from high above :D BTW, the pilot said he had the F-22 locked on radar. So much for “Stealth” xaxa https://www.almasdarnews.com/article/russian-su-35-allegedly-intercepts-us-f-22-raptor-over-syria/

This is the difference between photoshops and real interceptions my friend
:D

Russian S-300/S-400 reinforced with krasutkah/EW systems and anti-satellite warfare would cripple US airpower immediately. BTW, Russia has multiple of its EW systems along with S-400 already in Syria. They can jam any plane/satellite within 500km and pick it off with SAM.

Israel proved Russian chest beatingg is just hot air. Your “invincible” (lol) systems have utterly failed to protect the SAA from hundreds of fatalities. I can of course prove all of those casualties even using skewed Russian sources, but you’ll deny it anyways
Bwahahaha

The S300/S400 and Russian military only protect Latakia and Tartus. They don’t protect Syrian Army. Try attacking Russia directly and your forces will be pulverized.

A vid of Pat the White American dog.

Hello pseudo-murican again, can I ask where are you from originally? Asian? European? African? Just wonder.

That was a Sukhoi Su-24M

Aren’t various incidents getting mixed up here or is that just me. There was the recent episode involving a US F-15C, which basically just involved two fighter pilots who both signed on for these stunts on their respective side. And then there was the, in my eyes, much more serious incident when a Polish F-16 intercepted I think it was Shoigu’s plane, and a Russian Sukhoi reminded the Polak of the potential consequences.

Either way, we still have Lavrov’s word that Russians won’t shoot at Americans no matter what; it’s official, folks.

At these ranges, short range air to air missiles and gatling guns are almost a 100% guaranteed shootdown. no evasive maneuvers or countermeasures will help you escape. US airforce has no business thousands of miles away from America in the baltics and off the coast of kaliningrad.

The music is distracting – as though turning real life into a video game.

US fighters are Govermentels too. 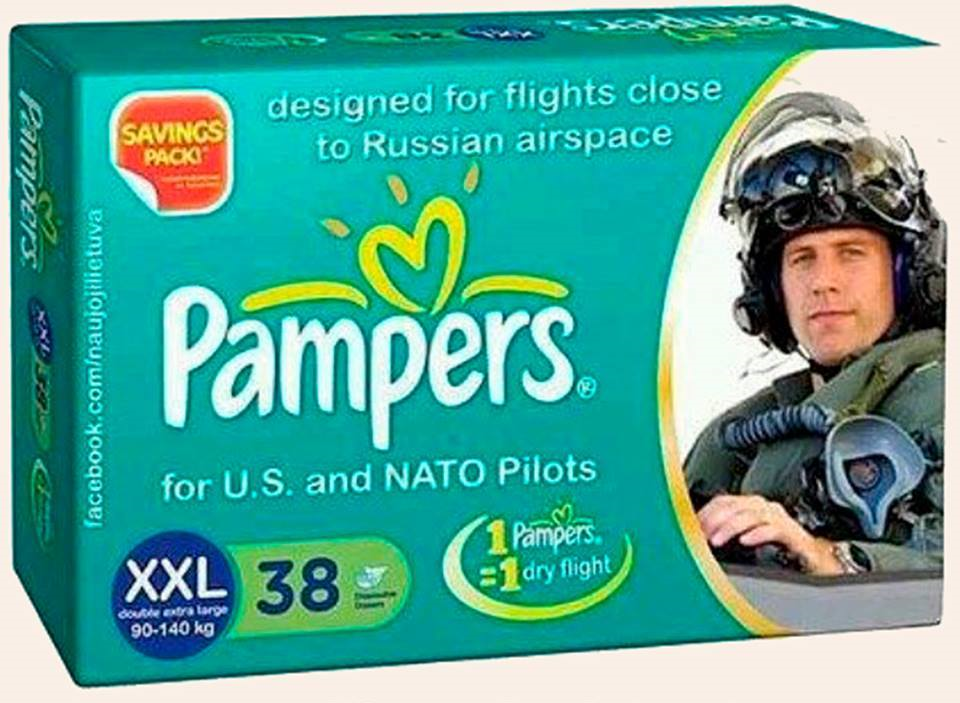 Why was the US plane allowed to get that close in the first place? The Su-27 pilot should have intercepted the US plane before it got anywhere near the government plane.

Dude should’ve hit the brakes. A SU-27 is not something I’d want on my tail.

If anyone was reckless, it was the US pilot!Who do you think you are?

They would never make a hollywood movie out of it as hollywood do not deal in reality!