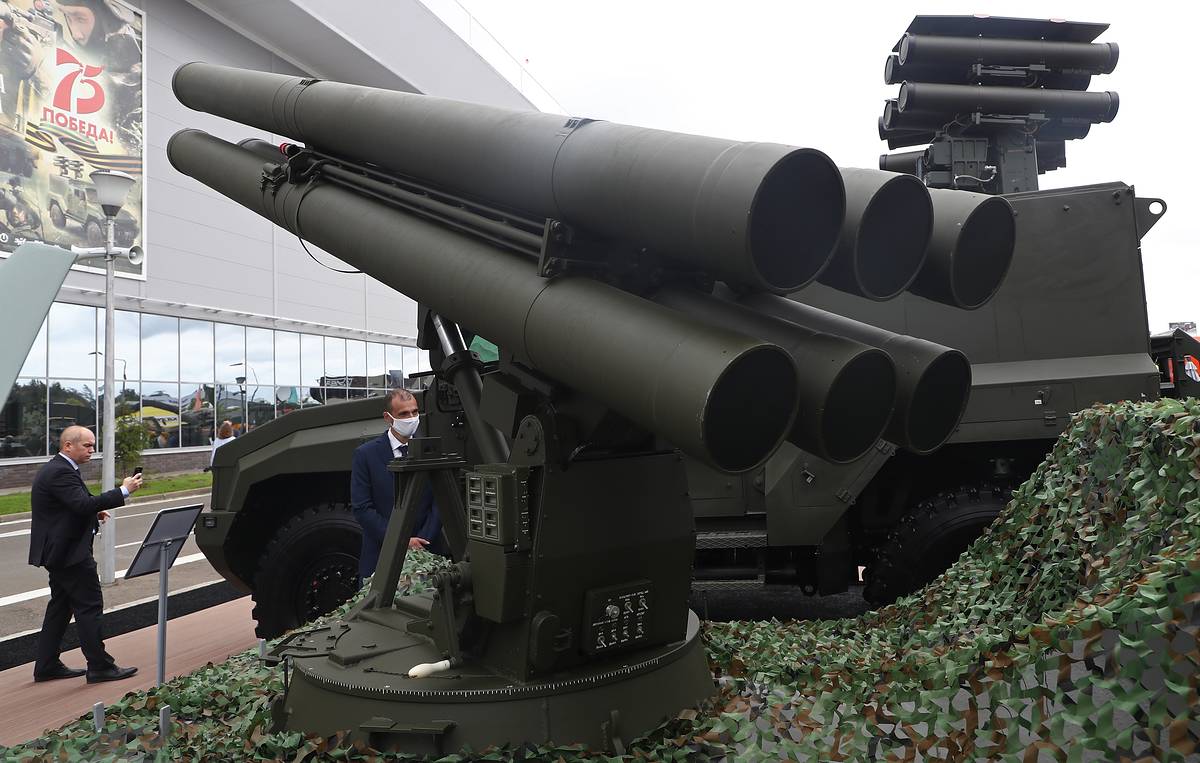 The Hermes high-precision guided missile system with over-the-horizon range of up to 100 km was presented by the KBP Instrument Design Bureau, at the Army-2020 forum in Moscow.

Hermes has an autonomous missile guidance system of the fire-and-forget type. Hermes guided missiles are capable of being fired from aerial (including drones), land-based and naval platforms.

The system features the salvo launch mode at several (up to six) scattered targets and automated synchronization of laser guidance for striking targets with a high-precision projectile with miss distance not exceeding 0.5 meters.

It is specifically designed to engage single and multiple targets of various types but mainly battle tanks, other armored vehicles, fortifications, naval surface targets and high-speed flying vehicles. It is a sort of precision one-size-fits-all weapon, that predominantly serves as an anti-tank guided missile.

ATGMs are the most significant tool of the Russian ground troops, as they can successfully counter an adversary’s main battle tanks, as well as other armored vehicles, as mentioned above.

A representative of the Tula Instrument Design Bureau said at the forum that the Hermes anti-tank guided missile is capable of almost 100% certain destruction of any Western tank.

Experts from the American magazine The National Interest said that this is the new Russian “tank killer”, compared to which the infamous American anti-tank missile FGM-148 Javelin looks outdated.

As mentioned above, a Hermes missile may deviate only by 50 cm from the target even when it is fired to a maximum range of 100 km, with the munition flying at four times the speed of sound (Mach 4). The system features a compact combat module with launchers for six missiles.

This module can be mounted on any chassis, including armored vehicles.

The Hermes can deliver salvo fire against six targets at a time.

Apart from the enemy armor, the system’s missiles are effective against command or staff vehicles, communications centers and depots.

Each missile carries a high-explosive fragmentation warhead with 20 kg of TNT.

The combat vehicle could be equipped with 6-12-24 missiles ready for launch.

It is not known which missiles will be used by Hermes during launches. Even its GRAU index is not disclosed. Two calibers of the accelerator are presumed, depending on the flight range – 170 or 210 mm.

The guidance system is combined, at the stage of reaching the target it is carried out using inertial or radio command guidance, and at the final stage using the seeker, including the laser one.

All of this, of course, makes the missile cost more, but at the same time, it is still nothing in comparison to how much a Western tank costs.

Even if more than one missile strikes a tank, if they destroy it, that is a sort of profit.

The cost, for example, of the new German Leopard 2A6 main battle tank is $6.79 million, and the American M1A2 SEP Abrams – at least $8.6 million. It is unlikely that an ATGM missile costs anywhere near that.

In addition to the accuracy and sufficient power of the Hermes ATGM missile (18–20 kg of explosive), the biggest plus in the effectiveness of this complex is the range of destruction. However, the question involuntarily arises, how will control be carried out at a distance of 100 km?

Especially when it comes to moving targets – tanks do not always stand in place, but they will be the main target. And one multifunctional radar can hardly be enough. More information is needed to come to a definite conclusion.

It could potentially be a game-changer in the anti-tank field, and is comparable if not better than the Israeli Spike missiles, and is clearly superior to the American Javelin missiles, as mentioned above.

According to the National Interest, Russian sent the weapon system to Syria.

That is multiple rocket launcher ammunition and not guided missile isn’t it?

You launch a barrage of them…Glonass and INS take the rocket to the target…optoelectronic system correct the final course…and Boom!..similar to Iran ballistic missile attack to Assad& Erbil base..but in this case the final stage can do maneuvers in the air like an ATGM

Yeah genius, except that “barrage” boom costs much more than tank at the end.

No because with the barrage you are attacking many incoming or deployed tanks, artillery and APC

I was talking about destruction of one tank only. Today in the times of drones the most stupid thing that can be done is to pile up the armory in one place. Last example was when hole battalion of Ukrainian tanks was destroyed with one minute “barrage” artillery, MLRS fire near the Donbass.

Pretty impressive range for such a small rocket.

Probably this was done by a russian Kornet.

No US domestic abrams tank has been lost in combat.

The picture shows a saudi abrams lost in yemen during the early months of that war.

Its an Iraqi Abrams lost to IS.

Its this tank, and the story of what happened to it.

HERMESis NEW missile and this is just illustrative example for missile that has 97 to 98% efficacy…Or you think that Abarms will look better than on the photo after HERMES?

Pretty sure its a saudi abrams lost in yemen….

lol he is a fat liar…

OK and? It was illustrative example about NEW deadly missile can’t you deduce that?! Where was I suppose to find photo?

Or you think that US tanks will look much better afer hit by this missile that are declared with 98 to 99% efficacy?!?

puhaha that guy is miracle….

That was just illustrative example of what will happen with 98 to 99% kill efficacy of the missile against Western tanks. Since the missile is new where do you expect anybody to have photo of destroyed Abrams already without even being deployed in Syria and Iraq?!

How well would such a system do against active armour?

It would blow tank entirely.

High-explosive fragmentation warhead with 20 kg of TNT with speed up to Mach 4. Indeed this would be overkill if the top of the tank was hit. !

Even hull and sides if hit.

This one have way more power and warhead of 25kg. That is seriously strong.

Wow! So the Turkish Navy got scared of a few greek submarines without torpedoes? Why?

lol its my opnion..scared of afew greek submarines?? hell no but underestimating any army is also wrong military attitude…

Because we have torpedoes !!!

Ahahahahahah. It was as if the Russians were starving. Westerners and cowboys have become just embarrassing clowns

your CIA feminine envy is tiresome

junk is the most masculine pair you could find

Her avatar isn’t Saurons Eye but her own inflamed vulva.

Love to see it having trials in Eastern Ukraine and Syria.

Send a bunch to Idlibistan for active trials kthx

a few of those in the hands of hezbollah and ditto for syria and the jews will soil their pants and cry for mamma.

So which is it?

Also, it had better not be TNT cause that stuff has been obsolete for combat since WW1 lol.

No, all the numbers are BS… most likely the actual whatever it is is very much higher or lower… Either way, ur gonna need something with alot more kick against the US domestic abrams tank, or any tank for that matter lolololol….

Warhead consists not from explosives only. Usually it’s near 2/3 mass of warhead.

“However, the question involuntarily arises, how will control be carried out at a distance of 100 km?”

many here are more aware of weapons than me; I suspect that many nations have advanced weapons…Russia obviously does…for all the money US spends they produce inferior incompetent weapons, airplanes, helicopters, tanks, etc….they waste money on irrelevant carriers to intimidate Dominican Republic—half r being repaired…their own seaman destroy them by arson…..now ISIS/Antifa is burning their forests and BLM has transformed their cities into plywood villages….in Vietnam their soldiers killed their own officers…today 22 US veterans suicide each day…..I suspect their raping and murdering in Afghanistan, Iraq, etc can only be addressed w heroin and antidepressant for a limited period of time