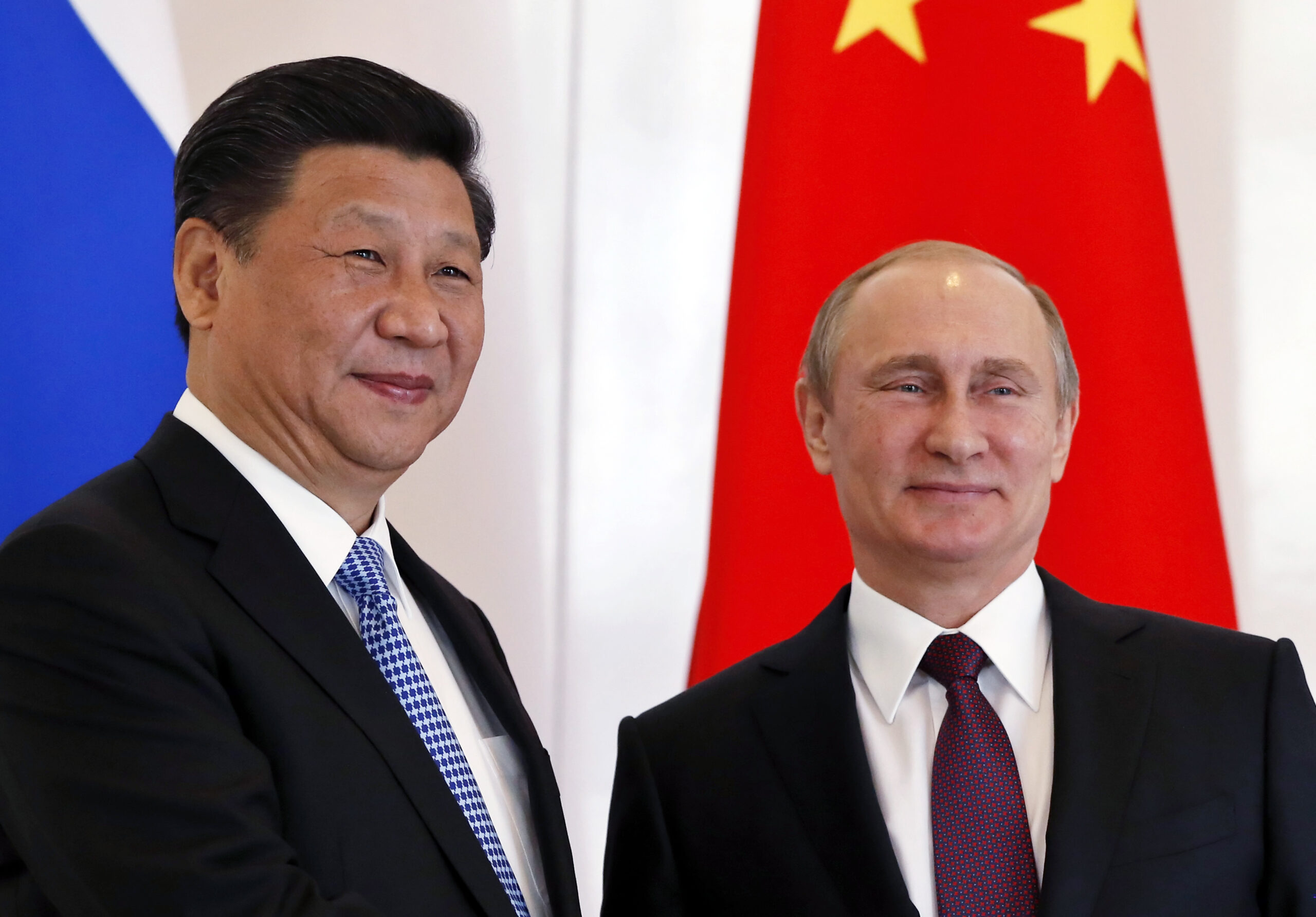 While leaving Afghanistan, the United States left $85 billion worth of weapons and military equipment that fell into the Taliban’s hands.

The Sunday Times has published an illustrative infographic, showing the new Taliban’s equipment. The group will benefit from more than 22,000 Humvees, 42,000 pick-up trucks and SUVs, 16,000 night visions goggles and devices, 64,000 machine guns, and 358,000 assault rifles. 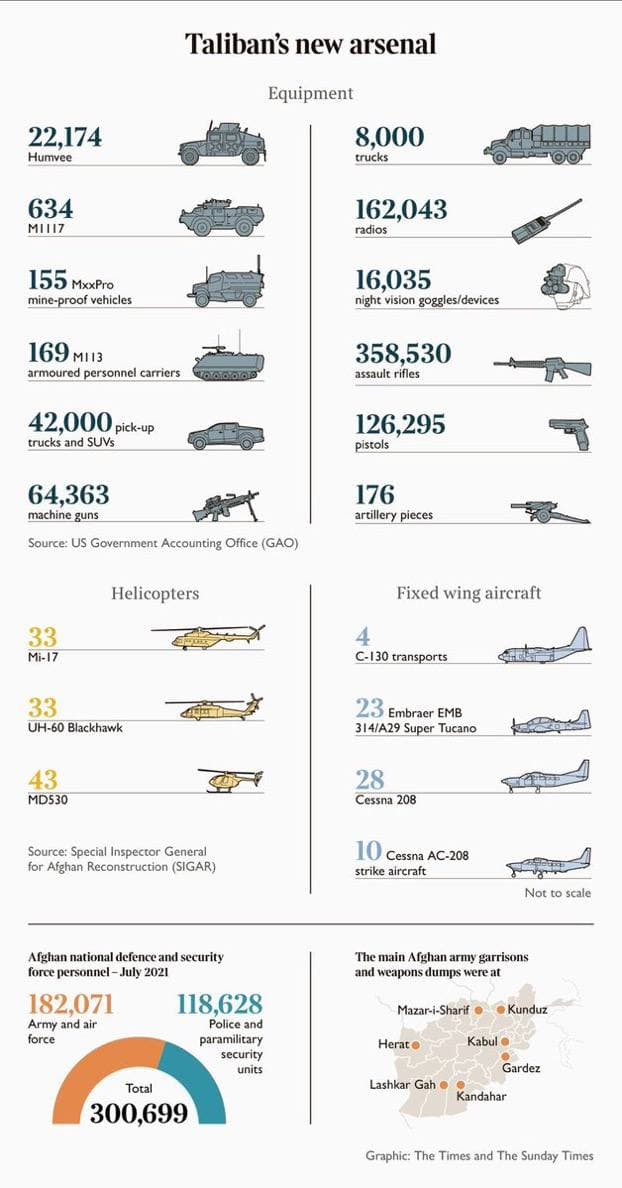 Thanks to the United States, the Taliban is now equipped no worse than Tajikistan,Uzbekistan and Kyrgyzstan combined. At the same time, the Taliban fighters have much more combat experience than soldiers of the regular armies of these countries.

For perspective… $85,000,000,000 worth of military being left to Taliban Terrorists means that each and every man, woman, and child in American contributed about $265 to their terrorist cause assuming +/-320 mil citizens.
Well done Democrats! pic.twitter.com/fXefvP5cNH

The CSTO members lead by Russia are deeply concerned about the level of the Taliban’s Afghanistan militarization. As a result, numerous joint exercises are being held. Most recently, about 300 Russian servicemen and more than 60 pieces of equipment were transferred to Kyrgyzstan for the CSTO maneuvers. At the same time, 500 Russian soldiers are taking part in life-fire exercises of motorized rifle units in Tajikistan.

Large-scale joint exercises with Iran and China are also planned in the coming months.

Despite the disputes in their bilateral agenda, Russia and China, the two major Eurasian states, are united in their desire not to allow any other forces to interrupt their key interests in the Central Asia region.

The new threats will likely become one of the main factors that may dramatically strengthen military cooperation between the two countries, and which may even lead to the creation of a new military-political alliance in the near future.

This is what the Washington establishment is concerned about today.

Russia and China have been moving step by step towards creating a military alliance, at least of a defensive nature. If earlier the parties could assume a political union, now the whole dynamics of international relations, especially the events in 2020-2021 in Belarus and Afghanistan, pushed Beijing and Moscow to accelerate the processes that could lead to the creation of a new military-political alliance.

Imagine that, the terrorists in the US just dumped all those weapons close to Russia and China.

One good turn deserves another. I think Russia and China need to help those poor Mexicans who are being murdered daily by DEA death squads. A few thousand MANPADS might be able to take out DEA flights. It may also lead to the shooting down of civilian aircraft, but it didn’t stop the Yanks from giving away their SAM systems to terrorists.

They’re on the same side engaged in a psychopathic political theatre, stop pretending otherwise.

Then idiots on here think “you’re a nazi!” for wanting our own white ethnostates, only white people are forbidden from having their own nations.

Since the kikes overwhelmingly oppose pro-White identity and have been a menace everywhere for almost 3,000 years, they should not have rights of their own and deserve to be exterminated for their criminality.

Not only do they engage in psychopathic projection while projecting their own evil onto others (especially Whites), they promote the lie of equality and universalism while teaching the exact opposite narrative to themselves.

They do this for the same reason a poisoner won’t drink the poison they make, in this context it is a spiritual poison in order to reduce ethnic solidarity to breed us out of existence through miscegenation.

“The pseudo-religious founding myth of the postwar global order is that “Whiteness” (lit: White people) must be crushed in order to protect “our wonderfully tolerant, racially diverse, Democratic Utopia.” White Supremacy is the ultimate enemy; “dismantling” “Whiteness” is the highest social goal; the Straight White Male is the singular most “oppressive” force in the Universe; White people as a collective — including women and even children — are solely responsible for all worldly suffering, and an unrivaled force of tyranny that must be usurped, impoverished, disenfranchised, and, fundamentally, destroyed; all for the good of “human progress.”

Under this system, Whites must always be framed as the oppressors and aggressors, and non-Whites as the eternal victims. Any inconvenient victimization of Whites at the hands of non-Whites, historic or contemporary, is a direct refutation of the founding myth of the postwar global order. Any historic non-White imperialist aggression against Europeans — of which there are countless examples — is point-blank denied or hurriedly brushed under the rug. The Arab, Barbary, and Ottoman slave trades, responsible for the kidnapping of millions of Europeans, mostly women and children, are flat-out ignored. The Leftist myth of “Systemic Racism” claims that any non-White who criminally victimizes a White person is actually the true victim in the scenario. This is due to the “systemic oppression” that “People of Color” face in their day-to-day lives, relative to the “systemic privilege” that Whites are born into. The criminal blame, thus, fundamentally lies with Whites themselves, the mythical “great oppressor.”

This anti-White bias exists to destroy Whites’ sense of racial and ethnic identity, to trick us into embracing our own ethnic displacement via an endless torrent of violent and hostile mass migration, to destabilize our societies, to prevent us from speaking out against these injustices, and to prevent us from uniting against the tyranny of our globalist, technocratic overlords. In other words, if the White masses understood that our European homelands have been under constant invasion for the past 2,500 years, they may start to view modern mass migration in a slightly different light.”

“This anti-White bias exists to destroy Whites’ sense of racial and ethnic identity, to trick us into embracing our own ethnic displacement via an endless torrent of violent and hostile mass migration, to destabilize our societies,” – Whites have done this exactly dozens of times to other nations in the 500 year old colonial past of Europe. The war against Middle Eastern countries are not jew-Only wars – its based on White Supremacy and Greed. Europe and US citizens benefit directly from these wars through access to cheaper fuel and goods. Stop whining. you deserve what you got. Its payback time Bitch.

Typical liberal nigger stupidity. “You deserve what you get because of what someone else your color did at some other time.”

Thankfully God is white and he is gonna judge you.

Exactly, and why should we just allow them to do it? The time for fighting back is near and by God you non-whites will know suffering the likes you could’ve never imagined

Keep dreaming! There will never be any military alliance between Russia and China. Russia is quick to engage in wars despite having a much weaker economy than China. The Chinese are cautious towards any kind of military engagement, and that has helped them maintain good relations with almost every country. By allying with Russia, China knows that it’s opening itself to possibilities of conflict that Russia may provoke somewhere around the world. Chinese support for Russia will be limited to UN votes. Putin has been desiring this alliance for long, but it simply isn’t going to happen.

Russia surely doesn’t want Sharia on its doorstep, but that is exactly what the Taliban will do. This war booty for Taliban will be used to defend Afghanistan in case Russia wants to try its luck the second time.

I would give you 100 upvotes for this comment if I could. See how many downvotes the ruskies gave you! LOL. This comment very much rocked their sucks. You surely know how to rub a raw nerve. keep up the good work. I love it.

you turkish guppu…….we’re goin gulag yous back to xinjiang! you hear that?…….the trains pulling up…..get your belongings and round up your chinku moghal family. Yous goin home soon!

Thats ridiculous. Why are they scared? The Taliban’s winning strategy was suited for a war of attrition in its own country with massive popular support. It makes no sense for them to want to invade other countries. They would lose in a month.

Anyone who doesn’t see that the u.s. purposefully armed the new and improved tallywackers are idiots.

Funny, the tallywackers already know how to operate their new equipment too.

But it’s not China and Russia that will be the target of the CIA’s new proxy terrorist army. Not at first anyway.

Interesting, if not China and Russia who then?

The purpose is to blackmail China and Russia’s Companies on their OBOR and rebuilding projects in Afghanistan. A US/Taliban deal and military protection scheme.