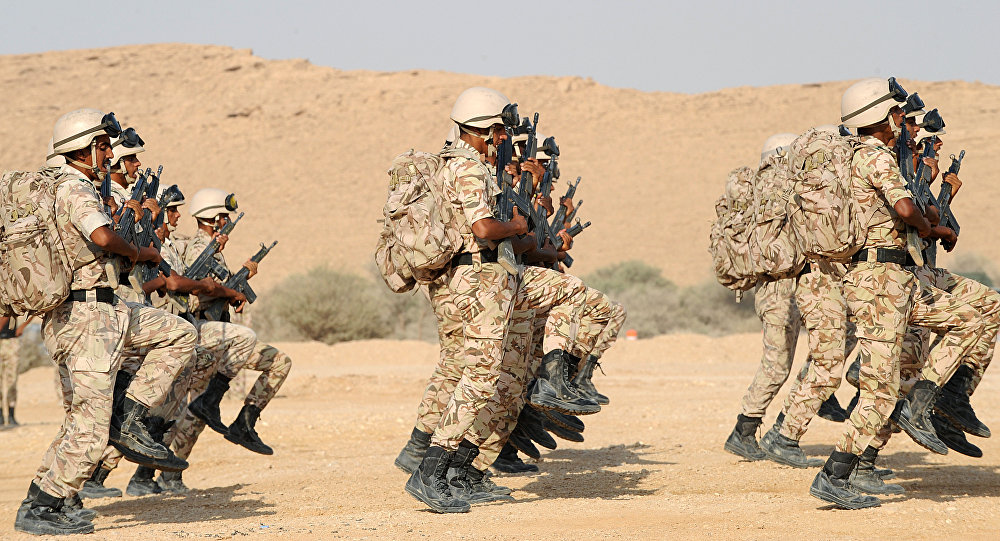 During this week NATO summit in Brussels, Saudi Arabia is expected to put the question of sending ground troops to Syria on the agenda. Saudi military’s representative, Brigade General Ahmed Assiri, already said that “Saudi Arabia intends to destroy the Islamic State,”

Such announcements were shortly after Turkey’s declaration it is considering launching a ground operation in Syria.

At first glance, the Saudi proposal follows the policy laid out by Washington. Barack Obama in his capacity as the head of anti-ISIS coalition, has refused to place ground troops in Syria for the longest time, stating that local armies ought to destroy ISIS and stabilize the conflict zone. SecDef Ash Carter recently complained that US coalition partners are insufficiently support of US efforts, and during the Davos forum in late January he said that “there will be no free riders.”

However, experts believe that placing Saudi forces in Syria would likely be a terrible move, leading to catastrophic consequences. They believe Riyadh does not want to stabilize the situation but exact vengeance on its main adversary, Iran.

Since starting operations in Syria in September of 2014, Saudi forces dropped relatively few bombs. Moreover, Saudi ground forces are utterly untested militarily, as they are mainly used to protect borders and fulfill police roles, not to wage large-scale operations.

Saudi Arabia is, moreover, pursuing objectives very different from those of the US or of most other participants in that conflict. The proposal to send troops is most likely an attempt to communicate to Iran that Saudi leadership will not allow it to conduct operations in support of Assad. Just as Saudi Arabia condemned Tehran’s involvement in the Yemeni civil war.

“Saudi strategic objectives are very different from ours. Any new foreign military contingent in Syria will only complicate the struggle against the main threat, namely ISIS. The Saudis know perfectly well what they want. They want to overthrow Assad,” Steven Kinzer, a senior researcher at the Watson Institute of International Studies at Brown University, believes.

Boston Globe published Kinzer’s article in which he describes what he calls “aggressive activities” of the Saudi government. As a result, the Saudis are considered to be less and less dependable, with Riyadh no longer able to count on full US support.

It’s not clear, according to Kinzer, how Saudi troops would cooperate with other ground forces in Syria, including the Kurds. In recent operations, the Saudis proved to be cruel and even criminal. UN has stated that the Saudi air campaign against the Houthis is in violation of international norms and should be investigated.

In 2011, during the Arab Spring, Saudi Arabia sent its forces to Bahrain in order to support its friendly Sunni rulers. This act was generally condemned as unlawful.

“I will consider any Saudi attempt to send troops to Syria an attempt to destabilize. It would result in Saudi forces drawing closer and closer to Iran.”

“Such a land operation would be guaranteed to undermine the already weak efforts to reach a peaceful settlement of the Syria conflict,” Kinzer sums up.

Saudi troops everyday are getting murdered and loosing territory by Houthi fighters so it is quite laughable for them to even consider sending troops in Syria.

“Well, these Shiite militias are giving us way too hard of a time in Yemen. What should we do?”

“I know, let’s get into a direct confrontation with Russia!”

I know it seems laughable, but it would have seemed laughable for Hitler to invade Russia in late June when he had Britain on its heels…

Russia, and Iran have made it quite clear “what happens if Saudi Arabia invades Syria”:

Russia has said that they will view this as a declaration of war. If the Saudis are lucky Russia will only destroy their army in Syria. If not, they will destroy Saudi Arabia. The Russian supersonic bombers and missiles can fly over Iran and hit Arabia in half an hour. If the are given a base by Iran on the Persian Gulf, they can be there in minutes.

Iran has also been quite clear. They have officially welcomed this move since they see it as an act of suicide for the Al Saud regime. They will destroy the Saudi army and if there is any retaliation against Iran’s homeland, they will destroy Saudi Arabia.

Likewise Syria has said that they view this move as an invasion and will send the Saudis back in coffins. They have even specified the material the coffins will be made of — Wood.

At least one Gulf Sheikh sees this declaration of war on Russia as idiotic — the sheikh of Bahrain is in Moscow exchanging gifts and loudly announcing that he will not be participating in this mass-suicide. He is wasting his time however and will be hit harder than anyone else — his country hosts the USN Fifth Fleet and has just leased a base to the British Royal Navy.

Down with the evil Saudi regime, may the Heavens fall!

I have also read Pakistan’s expression of “confusion” at the Saudi announcement that Pakistan was part of its terrorist alliance.I’m glad Pakistan won’t get involved (or at least I hope they don’t…they are all Sunni, after all) because if they did, India MAY use the opportunity to surge troops into Kashmir and beyond, which would be a good check against Pakistan attacking Iran.

Let’s hope for peace. Or if we can’t have peace, let’s at least hope the T-14s get used in Syria!

Pakistan is mostly Sunni, but it also has 20 million Shia. 20 million!

They have also finally figured out that the Saudis seem to be making a lot of wrong moves. They refused to provide canon fodder for the Saudi destruction of Yemen and have made it very clear that they will participate on Saudi “anti-terror” adventures on a case by case basis, if at all.

Pakistan was created by the British to separate India and Iran. The Kashmir conflict was left behind as a farewell gift by the British to ensure that there would not be trade cooperation between India and Pakistan. The US sanctions ensured that trade with Iran was also impossible. This has left Pakistan with no trading neighbours except Afghanistan, who only exports drugs and imports American weapons. They have tired of this situation, not least as a result of Obama’s drone killings of civilians in Pakistan’s border areas. They would like to see the drones and the Americans gone and the border with at least one of their neighbours open.

They need to provide for close to 200 million people and to do so they need to trade. There will not be any trade with India in the foreseeable, so that just leaves Iran. They would like to import gas and electricity from Iran and export labour-intensive manufactured products like clothing, agricultural products and anything else that might be possible. They would also like to get in on the opportunities that the Silk Road rail and road links to China, Russia and Europe will bring. Unlike India, they do not want to be an island.

Saudi Arabia is a dictatorship that extracts resources and imports everything and follows America’s orders to the letter. This is not the path that Pakistan is trying to follow. Pakistan would like to follow Iran’s model and educate it’s masses, build it’s industries and develop its country as a democracy for its own population.

Good, your analysis indicates that Pakistan will not get involved.

And now with Russia’s ceasefire proposal, we may avoid a Syrian escalation yet!

Could it be that the US is setting up a “Saddam” trap for the stupid Saudies? That the US owes them a hell of a lot of cash and promises and they now do to them what they did to Saddam with Kuwait? So they promise support that will never come and just like the Pigs Bay in Cuba they will suffer horrible losses never to arise again?

All of this in order to get rid of a former allied that are somehow getting annoying?

I never considered that! You might be right. I believe we have already seen a glimpse of this play.

In early October 2015, Zbigniew Brzezinski wrote an op-ed in the Financial Times, suggesting to Obama that if Russia continues to bomb “American assets” (aka terrorists) in Syria, America should shoot down a Russian plane. Fast forward to November 24.

The Turkeys are most likely not shooting down a Russian SU-24 without having clearance and a reassurance of support from their NATO partner, America. That support never came officially, though America is continuing its support for Turkey’s terrorists in Syria.

You might be right, but the Saudis would have to be a special kind of stupid to fall for it after seeing America’s lack of support after the Russian shootdown. But of course, this new King in the family of former caravan raiders is no more than the 7th generation in a family of inbreds, with far too much faith in a well equipped, poorly performing military.

Only time will tell if the US is “Saddam-ing” the Saudi regime.

Strictly a rumor, but I have heard that Obama is a Shiite, which would be congruent with basically giving Saudi Arabia to Iran.

It’s a British war on the purpose of preserving control over the resources of the Middle East and North Africa as well as for preventing China of building a land-line that connects Asia and Africa (South Silk-Road Route). Saudis are pawns that act upon Anglo-American instructions. Americans and Brits have been piling up their armed forces in Iraq and Jordan respectively for quite some time. However, Turks and Saudis (and other Arab nations insane enough to join them) must be aware they are to be those to take the first deadly blow. If they fail to make any advancement, Anglo-American will wash the hands accusing them of pursuing the aggressive policy that jeopardises the stability of the world.

If the Saudi terror regime dare to make such a move, their heads will be handed over to them by Russia and Iran.

A fitting end for those inbred devils!