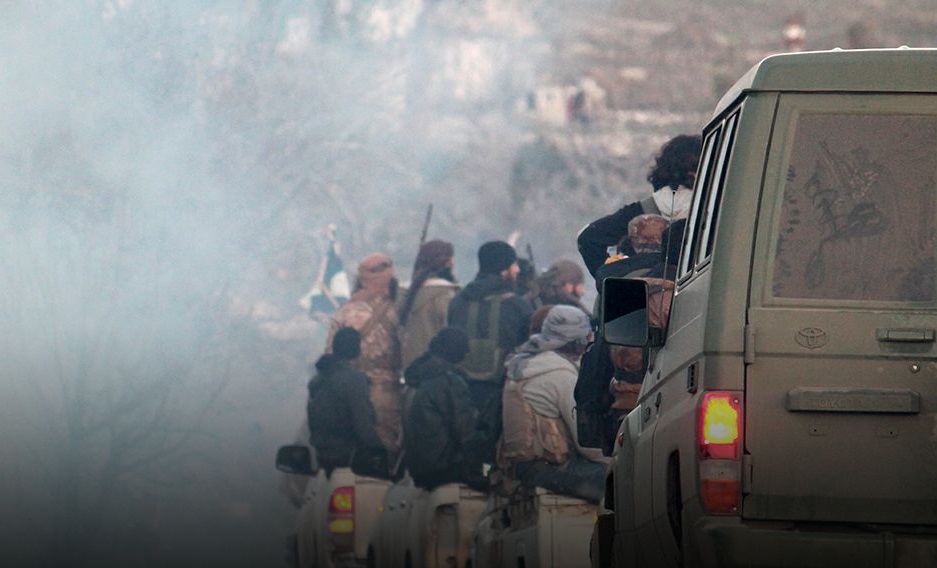 On July 7, a source familiar with the situation in southern Syria told the Syrian news outlet Enab Baladi that Russia warned the Free Syrian Army (FSA) groups in the western Daraa countryside that they will face a military operation if they don’t accept an evacuation agreement.

Following the Russian warning, FSA groups representing the towns of Inkhil, Jasim, al-Harrah, Nawa and Namar joined the negotiation with Russia, according to the pro-opposition news outlet.

The militants-held areas in the western Daraa countryside and al-Quneitra are a stronghold of the former branch of al-Qaeda, Hay’at Tahrir al-Sham (HTS). According to Syrian pro-government activists, hundreds of radical fighters are stationed there, mainly along the separation line with Israel.

The failure of the ongoing negotiation will likely force Russia and the Syrian Arab Army (SAA) to launch a large offensive in western Daraa against the FSA and HTS. A similar offensive forced the militants in eastern Daraa to surrender.

Good strategy, defeat them, then give them a way out. They always feel defeated, no matter where they go.

And when they arrive in Idlibstan they will spread their defeatist thoughts to the other Orcs there!

Several towns in the west have offered surrender and reconciliation so let’s hope this continues , the 5th Corps(ISIS Hunters) is being sent to Idlib from the Badiya ISIS will be cooked along with their other brethren.

Depending on how far the Zios will commit to protecting the ISIS Orcs in Tasil. The Green Orcs can be bused to Idlib. What can the Zios do with their ISIS puppets if they allow them to enter their Empire?

Just a coincidence that ISIS is on the Golan and Sinai borders then?

Killing them in the small confines of surrounded Idlib will be easy, if you look at the map there is Hezbollah on the south east, Turkey to the north and SAA all over Idlib. Unless their master Erdogan takes these losers, they will be bombed to bits. But I think the cowards will choose to surrender as usual. The US, Zionists and Turkeys made a bad investment in Wahhabi filth.

Err Dawg is the Butcher of Syria.

These cowardly headchoppers are finished. The SAA and Hezbollah have received a $ one billion windfall of captured CIA supplied weapons bought from the new eastern European vassal states like Poland, Romania, Bulgaria and Czech republic, all newly occupied by US warmongers.

The liberation of Syria a matter of time. Of course the western powers and Israel will never stop to seek for regime change.I( think Russia will be there to give Syria a helping hand.

So the Syrian and Russian forces will be operating right alongside the zionists in occupied GOlan. Will the satanic israhellis dare to attack them as they take on their Isis puppets? Very interesting times are coming up soon.

They will definitely try something dramatic you’ll see, as soon as their proxies (ISIS) find themselves surrounded, Israel will invent an excuse to try to save them.

as soon as operation starts for the liberation of quinetra area…thats when the satanic jews will go wild……for them its a matter of life and death now….daraa area, quintera area…..so whats next golan? Golan is a red line for them satanic jews….its a strategic area in times of war, and its a strategic area in times of peace due to its large drink water reservoir. The question is have the syrians through the russians accepted some kind of agreement on the golan heights? If not, this situation could get outa hand very fast because I dont think that SAA and Hez. will back off this time…unless ofcourse there is a deal on golan and we all dont know nothing about it.

The Syrian government coalition is clearly putting a lot of effort into infrastructure and civilian well being preservation. By giving the Jew world order terrorists the opportunity to leave or disarm on favorable terms. Which a lot of them are wisely accepting. Which is depriving the baby rapers of one of their primary goals, which is weakening the Syrian state so that it’s less of a threat to their scofflaw crime state colonization project in Palestine.

Are you joking? Or is your memory that short or trying to lie to other people. Not even two years ago they flatnered towns with grads and killed everybody in calling them all “terrorists”

Did you read that on an opposition website? I’ve seen nothing credible to support your allegation.

Totally unrelated… My heart is broken (and I don’t follow football normally) but I’m proud of our team. Thank you guys. You did more than you possibly could.

Russia did organize a very good foodball spectacle, you may be proud.

They played way above their ranking, be proud.

Same here, but mime is broken since Monday when we lost to Brazil

Yes, they did very well. We’re proud of our guys. And yes, I agree – Croatia is full of international stars.

i’m not sure, but i wonder if ragheads in this area tend not to negotiate as to provoke massive operations, with the aim of giving israel some pretext to intervene.

idk much about the tactical situation on the ground, besides the news on various outlets – substantially in line with sf commentary.

Green? The buses comming to Idlib are white you fool

Haha – who cares what colour the buses are it makes no difference they are being shipped out!

Do you know that the Holy Prophet (saw) also migrated with his companions to medina to continue his jihad after being warned of a plot to assassinate him? The is the same in the abstract terms so it is not defeat it is no retreat and nobody is being shipped out.

The only ones crying here are Israeli trolls like smaug and solomon kupec and whatever those jihadi troll farm posters that infest this site.