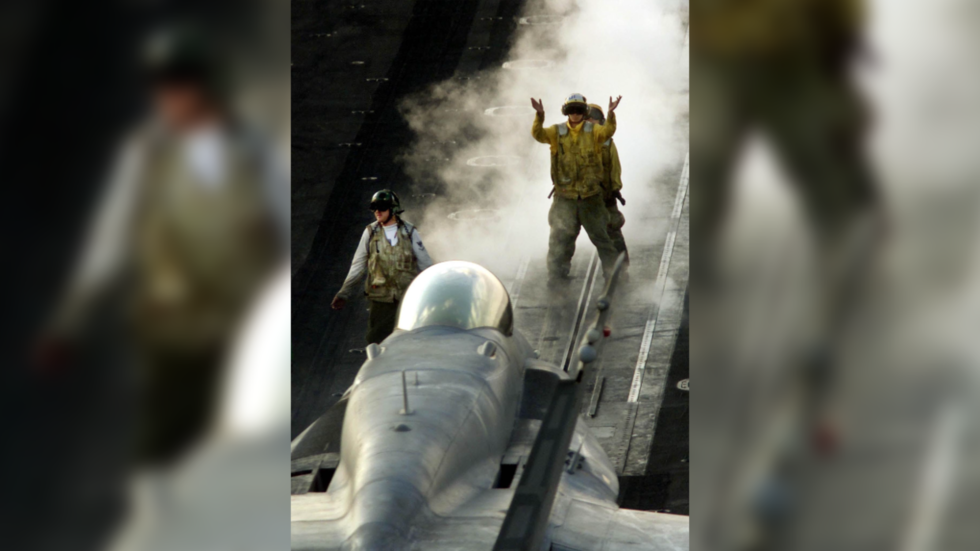 During his Memorial Day address to some 1,000 sailors and Marines on board the USS Wasp, US President Donald Trump took the opportunity to, once again, push for steam-powered catapults on America’s aircraft carriers.

“We’re spending all that money on electric and nobody knows what it’s going to be like in bad conditions,” Trump said, as he polled the sailors and Marines, whom he dubbed a “tough bunch of people” and “daring and mighty warriors in the Pacific.”

“So I think I’m going to put an order – when we build a new aircraft carrier, we’re going to use steam.”

“Steam’s only worked for about 65 years perfectly. And I won’t tell you this because it’s before my time by a little bit, but they have a $900 million cost overrun on this crazy electric catapult,” he added, at the end of the president’s four-day state visit to Japan. “They want to show – next, next, next. And we all want innovation, but it’s too much.”

The US Navy announced plans to purchase an additional two Ford-class aircraft carriers earlier this year according to Democratic Senator Tim Kaine, a member of the Senate Armed Services Committee.

Ford class carriers have long been an annoyance for Trump who has expressed skepticism over the efficacy of the Electromagnetic Aircraft Launch System, or EMALS, especially in battle conditions.

Trump also took the opportunity to tout Japan’s plans to buy some 105 F-35s in the near future, greatly bolstering its aerial defensive capabilities.

“The enemy has a problem with it. You know what the problem is? They can’t see it,” he said. “Other than that, it’s a fair fight.”

It’s not the first time Trump has brought up steam-powered catapults at an awkward time.

“So when you do the new carriers, as we do and as we’re thinking about doing, would you go with steam, or would you go with electromagnetic?” Trump asked during a 2018 Thanksgiving Day call with a US sailor who was serving overseas at the time.

lol carriers and F-35s, who does he think he is scaring?

and mostly has a “bird strike”.

The age of aircraft carriers is stagnant . They will be vulnerable till the day they are outfitted with a half dozen laser defense systems. Till that day, they are sitting ducks. Also the F-35 is an ok aircraft, but not great. The greatest aircraft the US has even built was the F-14. It was the number one threat to Russia and so in agreements the US signed with Russia, Russia demanded the decommissioning and destruction of the US F-14 fleet. They are really something. If the US wanted to be a cutting edge threat, they would make F-14 version 2.0’s.

The US got rid of the F-14 because they cost more to operate and maintain then the F/A-18, the Navy could operate more F/A-18’s then they could a mix of F-14’s and F/A-18’s, and the F/A-18 could drop more bombs on brown countries then the F-14 The F-14 as a long range interceptor just wasn’t necessary after the USSR disappeared and the old Soviet long range bombers started to rust away under Yeltsin. As a threat the F-14 was minimal to the Russians. They face the same kind of aircraft and abilities in the F-15 and F-22. Even more so because as a dogfighter the F-14 sucked. Engine wise it was kinda underpowered. Unlike the F-15 and F-16 which could outturn the F-14.

#1 If the mission is strictly fleet defense, the F-14 was a perfect platform. In fact, the six wing mounted pylons of the Super Hornet (or the four of the Hornet) impose a higher drag on the F/A-18 that couldn’t match the Tomcat performance as a very high speed interceptor. Indeed, the Tomcat is known to be a much faster airplane, with great sustained energy performance and, since it carried a great quantity of fuel which gave it a good endurance, the F-14 was also very good for high speed strike missions that the F/A-18 cannot match.

#2 In close air combat, the Super Hornet is much maneuverable (with a good authority at slow speed and high AOA – angle of attack) and, even if it lacks the AIM-54 Phoenix for the long distances in BVR (Beyond Visual Range) engagements which the F-14 enjoys, it has got the JHMCS (Joint Helmet Mounted Cueing System) and the AIM-9X Sidewinder for the dogfights which the F-14 didn’t integrate. As the F-14 was focused on distance and speed with very large fuel reserves which the F/A-18 does not have.

#4 So the F/A-18E/F is a great aircraft and a very versatile strike fighter. Still, it’s a Legacy Hornet evolution and it’s not as revolutionary as the F-14 was when it entered the active service in the ’70s, as the most experienced Tomcat driver, Capt. Dale “Snort” Snodgrass, once said.

2. The Super Hornet is adequate for the job of close air combat, as you’ve said. Especially against brown countries. And the F-14 was just underpowered for close air combat, although the D version fixed that. But then the question became one of cost. X numbers of F-14D’s vs X number plus Y more F/A-18’s. The F/A-18 easily won in that regard.

3. As for photo reconnaissance, no air force does that any more. Drones are more cost effective in that role.

4. Revolutionary isn’t always better. Revolutionary also means massive teething problems that have to be sorted out, whereas evolutionary means you can improve on existing designs that have those problems sorted out. The Russian T-90 gets a lot of love here for being so good and survivable, and yet its mostly an improved T-72. When the F-14 was designed swing wings were all the range. F-14, F-111, MiG-23/27, Tornado, to name a few. And then designers dropped it in favor of more conventional designs because fly-by-wore became all the rage. And as a dogfighter almost all later fighter designs run rings around the F-14. It’s heavy, it’s big, which means expensive, and its underpowered, which means not so good in a dog fight. It had however long interception range and the AIM-54 missile. Which made it a good shoein in the late 70’s and 80’s to stop Soviet bombers with long range missiles. For any other role, it could do the job, but range aside other aircraft were better at it.

I don’t think its a bad idea to scrap the EMAL system and go back to steam catapults. At least steam works. And sometimes somebody has to make the hard decisions when the underlings are just passing the buck of failure to one another.

The real question is why build more carriers at all ?

Two reasons: because the old ones need to be replaced after a certain time. That’s just the way it is. The average life of a warship is like 20 years, which can be extended by another decade or two with refits. And then they are spent. Nothing lasts forever. Considering that the US has 10 carriers, 4 years to build one that means 40 years is about the service life of a carrier before it has to be replaced.

The other reason being to keep the shipyard, the only one in the US with the capability and knowhow to build these ships in business. That may sound like I defend the US military industrial complex, but carriers are incredibly complex ships. The UK hasn’t build any for decades, and as a result the QE2 class was a friggin’ nightmare to build and constantly ran into cost overruns and problems. Russia hasn’t build a ship of that size since the breakup of the USSR and I doubt they can ever replace Kuznetsov.

You gotta use it or lose it. Once the US stops building carriers the shipyard might close, and/or the people who know how to build them will get laid off or go to other jobs.

Seriously you’re brainwashed by the military lol, we have 10 or 11 now and only one other country even has two , plus we have another 40 in mothballs a massive waste of tax dollars as the US spends as much as the next 7 countries combined …. that’s why we can’t have nice things other countries get, free health care , free college etc .

That’s a different thing altogether. We can argue if the US needs that many carriers. I’ll probably agree that it doesn’t. And that more needs to be spent on things that really matter for ordinary Americans. You’re 100% correct. But from a logistical and technical point of view it makes sense to keep that one shipyard churning out a new carrier every four years. Plus most of the mothball fleet is just in such dire conditions they might as well dismantle most of them. It costs more to refit them and bring them up to modern specs then it does to build a new one. Although I suspect the US DOD probably thinks it costs more to dismantle them then to keep them where they currently are.

No one else even comes close in spending , Russia and China are trying to develop their infrastructure while ours crumble , no clean water in Flint Mi. but we can launch 100 humanitarian tomahawk missiles on Syria for a a false flag gas attack at over a million for each one , just ludicrous , 900 bases in 120 countries ? How many bases do China and Russia have ? In how many countries ?

US lardass dumbass homosexuals are literally running out of steam. The morons Trump has blown enough steam up Jew arse!

The most amusing aspect to all the clinically obese service personnel of the US military, is that the military actually procures XXXXXXL uniforms for these militarily useless blobs of lard :)

come on! this is the first fat US soldier i have ever seen! So id say its rare!

Nothing wrong with sticking with what works, steam is EMP proof, dont know about the rest of the stuff though lol Might be going back to steam trains soon.

With wood from ‘sustainable forests’ thousands of miles away, rather than dirty old coal though.

Its politically important to tick the Libtard Green Boxes :)

IMO, the EMALS technology is not the problem. It’s the contractors hired to design, build and install them.

military tech is not my expertise; however, it seems that the US spends a lot in areas that r impractical and present easy targets for for stealth weapons, such as carriers, unmaneuverable aircraft like the F-35, etc. they may impress small nations like Ecuador, but likely nations like Iran, DPRK, China, Pakistan, Russia, etc r not impressed